Skip to content
Nice to see that the books I’ve been posting off are arriving safely: 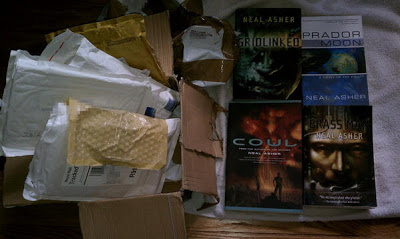 It’s also nice to see the shelves up in my loft steadily emptying. Those books weren’t doing anyone any good sitting up there. Hopefully I’ll get to the stage where I’m only sending off new books. However, I still have plenty of foreign editions I’ve no idea what the hell to do with. Many German readers out there? Because I’ve got a couple of boxes of the things – can’t remember which ones they are right now. If you haven’t received your books yet I shouldn’t worry too much. I’ve never actually posted any off and have them not arrive. Also, if you’ve chosen ‘overland postage’ remember that can take as much as 6 weeks if you’re somewhere like America. If anyone wants any more they’ll find a price list further down this blog, though of course some are missing from that list. Get in contact at the email below my bio on the right here and I’ll let you know if I have what you’re after. 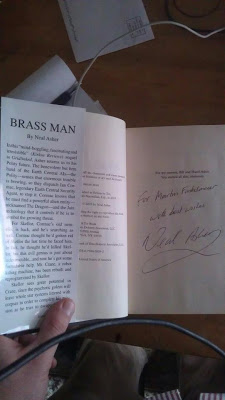 The writing is going well. Penny Royal I (which may be called ‘Isobel’) and II are finished to first draft while Penny Royal III is past 100,000 words. Yesterday my 2,000 words were written in the first of these. It was a sex scene. I didn’t do it for the gratuitous porn but because I’m taking more time now with character development and personal interactions. One fault to my writing is supposedly that my characters can be a bit cardboard, so I’m working on that. I’m also concentrating on more visceral/emotional reactions from my characters, more detail on aug communications and how that would change people’s behaviour, more on the nanosuites Polity citizens have running inside their bodies and how they’re used, and of course generally tightening up the plot. As I have pointed out before: the moment I think I’ve got nothing more to learn is really the moment I should quit.