Feeling in the need of reading a bit more science I picked up a copy of New Scientist (as mentioned in a previous post). It was slightly off-putting for me seeing the front cover picture of a ‘green’ city and the title ‘Urban Utopia – why the city is greener than the country’ but I persevered. I even decided to swallow bile and try reading the main ‘Escape to the City Story’. Perhaps I was being unfair, perhaps I’m too biased, perhaps I need to read more of this sort of stuff to get a more balanced view. 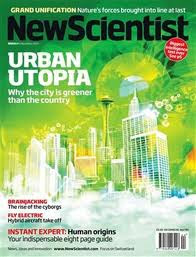 The basic contention of the article is of course quite correct: people packed together in cities will use less energy because resources are concentrated. They don’t need private transport, all their turds go in the same sewer, there’s less need to run electricity through miles of wires or water through miles of pipes. The dustbin men won’t burn as much fuel collecting the rubbish etc etc. So far, so bleeding obvious.

But about five paragraphs in we are told that UN reports suggest ‘that in 2008, 50% of the world’s population lived in urban settlements, which together take up just 3% of the Earth’s land area’. Yeah, okay, got that: battery farmed chickens take up less land than free-range ones.

Then, the next paragraph gives us: ‘This mass exodus from the countryside should lift the strain of intensive agriculture from the land, allowing forests to bounce back.’

I am absolutely stunned at the deep stupidity of that statement. Are we to suppose that city dwellers subsist on a more meagre diet than those in the country? Is the contention here that city dwellers can exist on organic carrots and tap water and that this will relieve ‘the strain of intensive agriculture’?

This was another lazy divisive article to display the magazine’s green credentials. A fairly unsurprising product of a BBC ‘science’ researcher who already has a history of producing such trash. There’s also a sinister edge here concerning how much easier it is to deliver ‘services’ to city dwellers, and to deal with their ‘social problems’.

Of course, it’s also so much easier to look after animals when they’re in a zoo.

Note: the next article in the magazine, one titled ‘Nurturing Nature’, explains to us how children raised in cities are more obese than those raised in the country. Go figure.