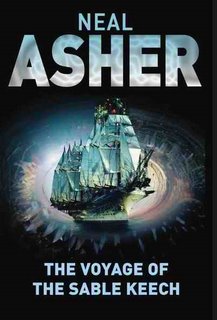 Okay, time for a pretty picture. This being an author’s blog I’ll start with my most recently published book.
And now the blurb:

It’s highly entertaining and brilliantly imagined stuff, and there can be few readers out there who will fail to enjoy this, and pretty much every other aspect of Asher’s writing. — John Berlyne (SFRevu)

I was ready for a break from real life, and Asher whisked me away without delay. — J. J. S. Boyce (Green Man Review).

No, once you’re plugged in to ‘The Voyage of the Sable Keech’, you’ll want to stay there as long as you can. — Rick Kleffel (The Agony Column)

The reification Sable Keech, a walking dead man, is the only one to have been resurrected by nanochanger. Did he succeed because he was infected by the Spatterjay virus, or because he came late to resurrection in a tank of seawater? Tracing the man’s journey in a ship also named after him, Taylor Bloc wants to know. He also wants so much else – adulation, power, control – and will go to any lengths to get it. And he has brought the means.

An ancient hive mind, almost incomprehensible to the human race, has sent an agent to the world. Does it want to obtain the poison sprine – effective against those made virtually indestructible by the Spatterjay virus? Janer must find it and stop it.
Erlin, still faced with the ennui of immortality, has her solitude rudely interrupted by a very angry whelkus titanicus, and begins the strangest of journey’s. Captain Ambel’s own journey, from Olian’s – where the currency of death his kept in a vault – is equally as strange. But he must reap the harvest of Erlin’s mistake, and survive.

Deep in the ocean the virus has wrought a terrible change that will affect them all. Something dormant for ten years is breaking free, and once again the aftershocks of an ancient war will focus on this watery world. And Sniper, for ten years the Warden of Spatterjay, finally takes delivery of his new drone shell. It’s much better than his old one: powerful engines, more lethal weapons, thicker armour.

He’s going to need it.

Bear with me here … I’m learning.

8 thoughts on “Voyage of the Sable Keech”