Mikalis and Leornardo turned up this morning and the latter is now working on the retaining wall for our front garden and another that runs along the side of the path leading to our front gate. Leonardo’s name is quite appropriate in a way because he does a very neat and precise job of pointing, though whether he’s designed any helicopters or investigated anatomy I’ve no idea. Here are ‘before’ pictures of the wall, after he cleared the weeds. The collapsed section was caused by a water pipe leak two years ago. Hopefully I’ll be able to put up the ‘after’ pictures with this post too. 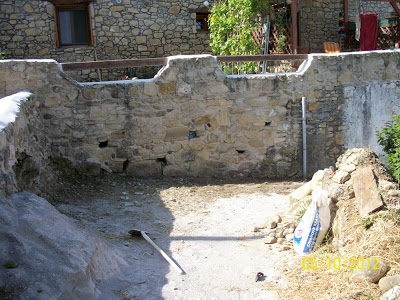 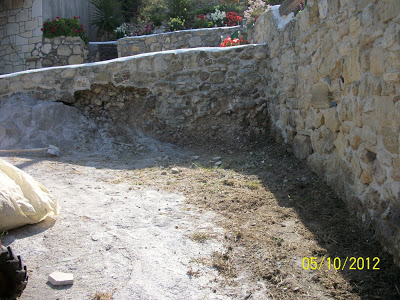 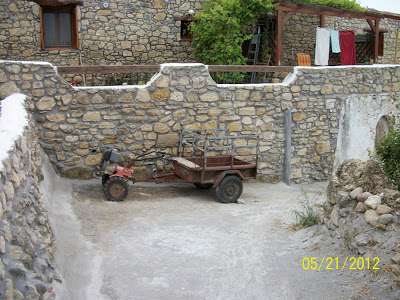 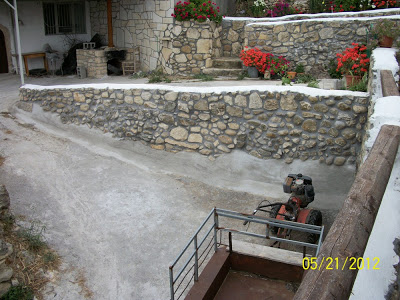 Feeling absolutely knackered last night I went to bed at 9.30, but the sleep thereafter was then followed by a bit of insomnia so I was up 2.20 sitting at my desk drinking a cup of tea. I do dislike not sleeping properly, but instead of moping about when I can’t sleep, I try to do something. In this case it was writing about and thinking about Penny Royal, and now I’m glad I woke up because it gave me a Eureka moment.

I can always write. I can create interesting scenes and events and I can progress them on the basis of characters, and related scenes and events – it’s just a case of moving from A to B to Z. Everything has consequences, time moves forward (well mostly) and every action has a reaction etc. The progress of a plot can sometimes be no more complicated than holding a stone above the ground. If you release it you know what happens next. I sometimes consider how right now I could quite easily embark on an endless book. However, that’s not what I have to do. I have to tell a story, it has to be enjoyable, fairly complicated and I have to end it in a manner satisfactory to both you and me between two covers.

With this Penny Royal thing I’ve been telling the stories of various interrelated events and characters and shifting them about like jigsaw pieces, only pieces that keep on changing shape, and trying to find out how they interlock. In fact, whittling bits off them to make them interlock and carving new pieces to fit in the gaps. My Eureka moment came in The Line of Polity when I made the mental connection between the sun mirrors of Elysium and the almost insoluble problem Cormac faced: Skellor, in a Jain-transformed Polity dreadnought. In the Penny Royal books I have been looking at a way of closing a large circle, but while thinking about that realized a smaller circle could be closed in this first book. As soon as that idea established itself in my mind things started to fall into place and the refinements began to kick in.

A whole section I’ve already written needs to come nearer the end. The heavy-worlder Trent needs an earring. Isobel needs to be more of a predator. And I now clearly see the resolutions those transformed by Penny Royal must face…

Of course, I can’t tell you much more than that.

Well, shortly after my Eureka moment I hoped to make the alterations I had thought about while they were still fresh in my mind. I started in on them but then we got a phone call from a driver from Nomad, who was delivering our kitchen. Shortly after it was delivered I set to work assembling the first cupboard. Over the next week I finished assembling them all, took down and shifted the old ones and set to work installing the new ones. 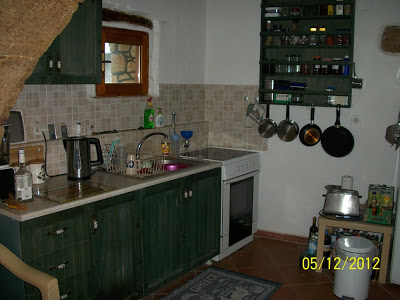 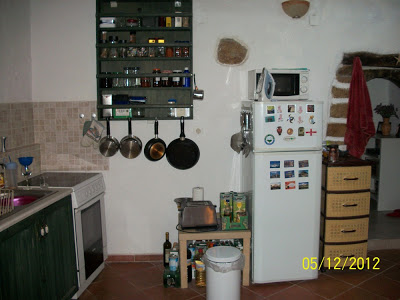 Plenty to do and plenty of problems to overcome: I had to extend the oven wire; find the right plumbing for the sink (I thought it would be delivered with it); I had to take off old tiles stuck on with tile glue set like granite; the kitchen corner isn’t square and I had to make a glory hole in there (I don’t like corner units), and this required some help from an English guy here who has a better set of power tools available (thanks Chris) and who also cut the worktop and hole through it for the sink for me; there isn’t a straight wall in the house; the hooks for the units along one wall fell precisely on electric wiring, one of them even over a wall junction box (I managed to avoid these until I decided, in belt-and-braces fashion, to put up another fixing and drilled straight through one); we don’t have enough worktop; wiring in new plugs seemed to take forever… 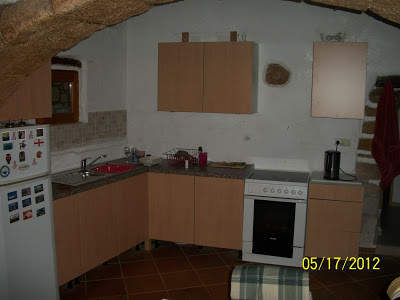 The kitchen, bar the tiling and a couple of small bits and pieces, is all but done. It has provided us with a lot more cupboard space, a lot more worktop, is definitely more ergonomic and a lot cleaner and tidier. The only problem is that we don’t like the doors. They are large, plain and of a colour that matches nothing else in the house. I’m now thinking about architrave, beading, paint…