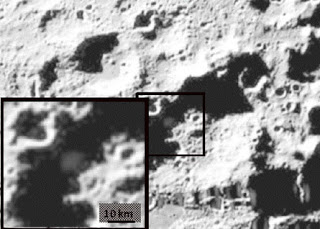 Remember NASA dropping spacecraft on the moon with the intent of analysing the dust plume created? It was all very disappointing for those accustomed to Hollywood CGI mega-bangs and received a fair bit of ridicule in the papers. Well, it was an experiment whose importance and results is immediately apparent to anyone like me, and readers here.

A small NASA spacecraft and its companion rocket did indeed strike water when they slammed into a permanently shadowed crater at the moon’s south pole, NASA announced November 13.

Water available on the moon means the possibility of a base like the one depicted in that old series Space 1999. And we’re not talking about a bit of damp here:

But analyses since then reveal that the impact kicked up at least 100 kilograms of water vapor and ice, or 25 gallons. LCROSS project scientist Anthony Colaprete of the NASA Ames Research Center in Mountain View, Calif., reported the finding during a briefing at Ames.