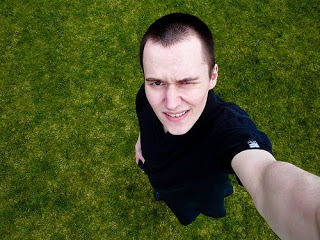 I’m 25 year old guy living in Germany. I call myself a transhumanist, atheist and vegetarian. I’m interested in science fiction, science, philosophy, math, language, consciousness and the nature of reality…

I grew up within a religious environment. Later decided to become vegetarian when I was around 14. That decision was likely my first revolt against religion. Shortly afterwards, still ‘believing’, I completely rejected god. I guess that made me a satanist? Anyway, around the age of 19, with the onset of prevalent Internet access, I quickly decided to call myself an atheist. Although my atheism is just a public statement. In an epistemological debate I’d position myself as agnostic.

I started to work as baker. Though found I’d rather sleep at night, since staying up basically turns me into a zombie. Afterwards I did various jobs, amongst other things working as digital media designer. The horror of push-button creativity…

These days I’m mainly trying to get a decent education.