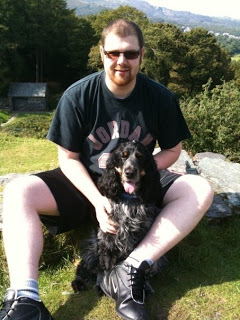 Where to start with the exciting information about Mark Chitty? Well, I’m a 29 year old guy living in North Wales with my wife, Jane, and hyperactive cocker spaniel, Snoop. I work at Bangor University where I deal with students on a day to day basis and help them with any problems they have while also attending to vital jobs such as unjamming the photocopier, ensuring adequate stock of yellow highlighters and whiteboard markers for the academic staff, and other generally riveting and challenging duties. Before doing this I’ve been an NVQ assessor, a paperwork processor, an admin dogs-body and also worked in a hotel doing all the things associated with it. Yes, that also includes cleaning the vomit stained beds after rather inconsiderate guests.
Due to the high excitement (or rather lack of) in my working day I found sci-fi as the perfect escape route. While I’ve always been a fan of tv shows and console games in the genre, it wasn’t until 2004 that I really started reading as heavily as I do now. While I’ve read some of the classics I much prefer fiction from the mid 90’s onwards with the likes of Peter Hamilton, Neal Asher, Alastair Reynolds, Gary Gibson, Eric Brown and a host of other British authors taking the top spots. John Scalzi and Tobias Buckell are really the only recent American authors that I like enough to name, but anything sci-fi will get a look in one way or another.
Because of this new found love of sci-fi literature I run a blog, www.walkerofworlds.com, where I review what I read and post other bits of information, cover art and press releases whenever I get them. I also run a Peter Hamilton fan site at www.theunisphere.com, something that stemmed from that book I picked up in 2004 that started this all off (Pandora’s Star, in case you’re wondering).
Other than reading I’m still a fairly avid gamer, but I get nowhere near enough time to play anymore. Favourites are the Final Fantasy series and Star Ocean games, although give me a bit of Resident Evil any day of the week. I just got an Xbox too, so more time and money are slowly being absorbed by it’s seductiveness! TV shows and movies are again pretty much sci-fi orientated – the Alien series is a particular favourite, as too are the Stargate shows.
As for hobbies, after reading and squeezing some game time into the week I still like to try and play some basketball. I started playing while at school and used to play in the national under-19s league, way back in the day! Nowadays it’s all about playing for enjoyment and keeping fit – it’s one of the few sports I will actually play.