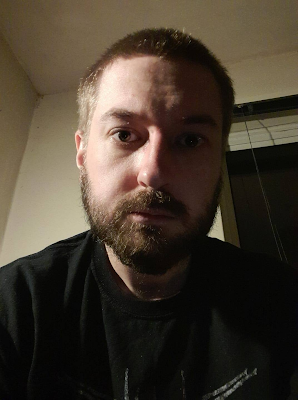 Reading has always been a big thing in my family, and from a very young age I tagged along with Frodo and Sam on their journey through Middle-Earth. I watched from the side lines with my sides splitting as Mr Fox fantastically outwitted his fat and windy-legged adversaries, and shared in the horrors of Jack and his family during their stay in an isolated hotel.

The more I read, the more I knew I wanted to be a writer. My first chance came when I was in primary school when we had to write a story in our A5 workbooks, of which we would share at the end of class. Whereas others wrote of dragons, talking dogs and adventures with their grandparents, I wrote a story about a monster that came in the night to snatch up naughty children, where it would then proceed to take them back to its cave, deep underground. It would then lock them in a cage together, and whenever it got hungry, it would pick one to have for its supper, and no matter how loudly the children screamed, no grownups would ever hear them. Needless to say, I wasn’t allowed to read my story at the end of class.

It wasn’t until my teen years that I really started to get into Sci-Fi literature (I was already a fan of it on screen), particularly when I started college and began to partake in…let’s say “chemical experimentation”, and discovered the works of Frank Herbert, Robert A. Heinlein, Philip K. Dick and the other usual suspects.

Then, one day, I was in a charity shop in Margate, there on the bookshelf, was a large collection of Neal Asher novels. They say not to judge a book by its cover, but when I saw the fantastic artwork by Jon Sullivan, I knew I had to own these books. I snatched up the lot of them (12 books for a tenner, bargain!)

Eight years later, and I can quite happily say with confidence that ‘The Technician’ is easily one of my favourite novels of all time, and has been a huge influence on my writing. It was the way you never shied away from explaining the science behind the gadgets or biology of your creations, much in the vein of Peter F. Hamilton and the like.

As I mentioned before, your work has been a big influence on my own work, and I would often find myself, whenever in a rough patch, thinking “what would Neal do?”

So, when kayaking, breaking chairs and not sleeping didn’t work, I would turn to your works instead and pretty much just rip you off (lawsuit pending, I’m sure). I jest, of course, but I would always find myself in those creative rough patches thinking “oh I can’t do it like this or this because of this and that” and then my lizard brain would kick in and say “Neal doesn’t play by the rules, and I’m pretty sure he’s done okay.” and that would be it! All caution thrown to the wind and before I knew it, the words would just haemorrhage from me and onto the page.

My name is Aaron, and I read Neal Asher!

One thought on “Who Reads my Books? Aaron J Waters”