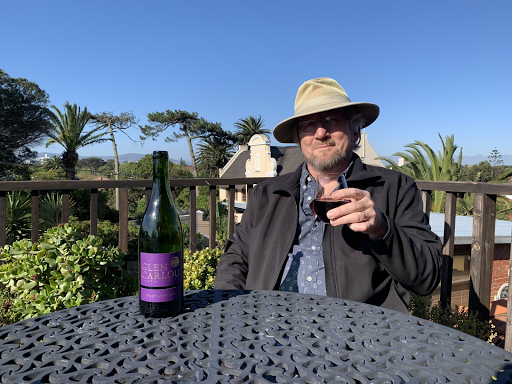 I came across your books through reading a copy of Line of Polity I found in a local bookstore here in Cape Town more than twelve years ago – and I was immediately hooked. Sarky spaceships, nasty drones, seriously smart tech – it was to love.

Then more started trickling in, and I made it my mission to collect these treasures: Line War may have been the next one, because I had read that by 2010; I now have nearly all the novel offerings in print, and the rest on my iPad via the Kindle app. 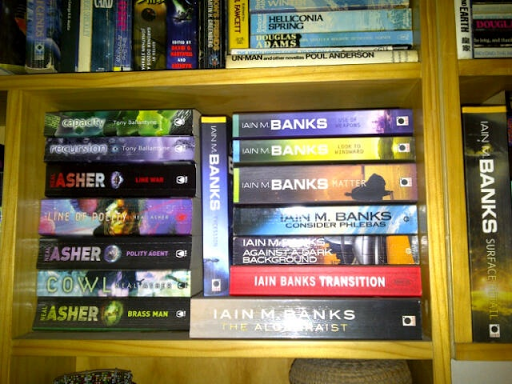 You’ll notice from the pic that I am also more than passing fond of Iain M Banks: I actually have a personal pantheon of modern SF authors that includes you, Banks, Reynolds, Stross, Ian McDonald, Peter Hamilton (some of the time) and Neal Stephenson in the first rank.

I am verging on 66, and I’ve been a professional academic virologist since 1981. I am also a lifelong SF fan, starting with Capt WE Johns (of Biggles fame) and John Wyndham in the mid-1960s, and progressing via the very excellent New Worlds in SF series and other short story collections, as well as…fuck it! …near obligatory Heinlein and Asimov and then Poul Anderson. I’ve actually tried to chronicle my progress via my own (modest) blog, as in this example: https://edrybicki.wordpress.com/2014/01/12/baby-steps-in-a-spacesuit-3-in-praise-of-the-short-form/ I am in fact a published near-SF author, if you count two ultrashort stories in the Futures section of Nature magazine: one (Womanspace) illustrates just how much trouble you can get into with the unamused woke brigade if you attempt a light-hearted homage to the old-style multiverse trope.

In my virology career I have also often mused over what sorts of biological nanotech (virus=infectious von Neumann machine) would be possible, given the couple of billion years worth of evolutionary refinement viruses have had to work with. These days, it’s discoveries related to defence systems against viruses – and their counter-measures – that continually amaze me. We have virus-derived tailored nanomachines (tailocins) used by bacteria to kill other bacteria; sequence-specific CRISPR/Cas DNA and now RNA editing suites used by bacteria against virus, AND by viruses against each other; molecular motors powered by ATP that spin at 2000+ rpm to pack DNA into protein shells…. Nature is smarter than we are, we need to adapt some of its creations better!

To close, it’s worth noting that 55 years worth of reading SF brings one to the realisation that there is presently some subtle and not-so-subtle remining of old veins of precious metal: Adrian Tchaikovsky recently effectively redid Gene Wolfe’s Shadow of the Torturer universe; Elizabeth Bear more or less wrote an update to James White’s Sector General series. I suppose it’s always been like that – but I’ve read a LOT, and I remember what I read, and I’d like folk to be more inventive and original. You, I have no such problem with.