Skip to content
Here’s Huan Tan — he’s the one on the right!﻿ 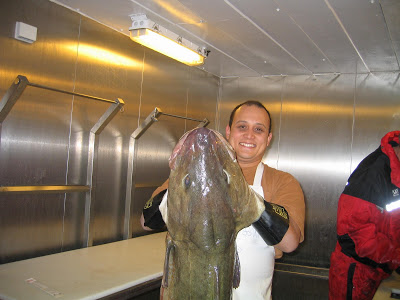 I thought I had better give you a short Bio. Currently living in Ireland and working for the Irish Sea Fisheries Board as a Fisheries Technologist. What that means is that I get to try and introduce new technology to the Fishermen. That could be as simple as another net design or as complex as sticking satellite tags into giant bluefin tuna and seeing where they go.

I have been working for this company for the last 12 years but before that I was a fisherman for 10years, I fished and drove boats around the world, Japan, Australia, Tahiti, Solomon Islands, Guam and New Zealand and the Flemish Cap were all places that I fished or delivered boats through. This gave me a great interest in marine life and is partly why I enjoy the Spatterjay series so much. There is plenty of weird stuff in the sea that hardly ever gets seen by people other than fishermen or avid documentary watchers. Especially the real deepwater stuff >1000m.

I also spent time as motorbike mechanic, a short order cook and a plastic double glazed window maker.
These days I like to spearfish, ride motorcycles and shoot firearms.

Funnily enough nearly all photos of me in the last 20 years or so have of me holding a fish….. Goes with the territory I guess. The backstory to this pic is that it was taken aboard a Norwegian research vessel called the G.O.Sars, way up past the arctic circle. We were doing some mad experiments to see if we could develop fishing gear that had a reduced environmental impact. Since then people have discovered that trawling is actually beneficial to some bottom types, a bit like ploughing a field I guess.

That cod was a big one, and went to make lots of pieces of boiled cod for the crew.

I hope this helps