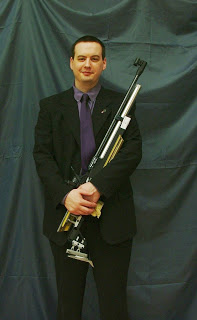 Mark Dennehy started his career as a delivery boy at Don Corleone’s pizza parlour until the day he used a pizza knife to carve up an irate customer … no no, stop it Neal. Over to Mark:
I mostly do network programming on unix these days for a pre-startup company, though I spent a few years before now working on website stuff for various companies (PHP programming, database stuff and lots of sysadmin work). Before that it was a PhD (which remains unfinished) on applying nonlinear mathematics to localisation and mapping in robotics. Before that I was working on a PhD on teleautonomous control of bomb disposal robots, but a german group (their equivalent of the US NEST group) beat me to publication and then proceeded to publish all over me 😀 I also lecture in embedded systems.
For hobbies, I do a lot of Olympic target shooting, I cook, and I fool about writing code and at the moment I’m mulling over whether or not to build another micromouse robot after watching this one solve a maze in under five seconds in last year’s all-japan championships.
I tend to read pretty much everything – as far as I know, I’m the youngest person to have read every book in the library in the town I grew up in, and I did that again when we moved towns. I’ve been reading science fiction since I was ten, starting with authors like Asimov and Clarke and Niven and progressing over the years to KSR, Banks, yourself, Haldeman, Brin, Reynolds, Stross and so on. Of late I’ve been reading more and more UK based hard scifi (I have far more fun reading it when the math works) because the UK stuff has a far more ingrained trend of looking at human behaviour pessimistically. In US hard scifi, the scientific math works; in the better UK stuff, both the scientific math and the economic math works, and there are far fewer idealistic characters (which is not the same thing as characters who have ideals). It’s a bit muckier, basicly. I don’t tend to read too much outside of science fiction anymore, and with the sole exception of Pratchett, never really found the fantasy genre to be able to hold my interest at all (likewise with crime, horror, and pretty much all the general fiction out there at the moment).
Personal favorites have changed over the years, but some have stayed in the top ten for years now. Stross’s riff on the lovecraftian universe with the Laundry, as well as Accelerando; Bank’s Culture novels especially The Player of Games; the Polity novels; KSR’s Red Mars (once the colony’s established, it gets a bit tedious); Vinge’s A Fire upon the Deep and A Deepness in the Sky; Cherryh’s Union/Alliance novels, especially Cyteen (I’m in the middle of its sequel Regenesis right now), and a few others.
Non-fiction works are about all I read outside of SF these days, whether they be general nonfiction (the latest include The Whale and the Reactor which I heartily recommend you not waste money buying and which is the first book in many years that I threw in the bin, as well as Big Brain which is a bit basic but is one of the few books out there that covers the Boskops and if you’ve never heard of them, go google them now for a bit of a braintwist — at least until you read the mainstream anthropological view), or cookery books (Blumenthal and Brown are worth reading even if you don’t like to cook), or professional development stuff (The Pragmatic Programmer, GUI development with PyQT, and the like).