Skip to content
Right, good stuff: I’ve edited my way through the three books while turning chapter notes into synopses along the way. As I have mentioned before I can firmly say that the books are called Penny Royal I: Isobel, Penny Royal II: Room 101 and Penny Royal III: Spear & Spine. Next I’m going to focus on Isobel and do further editing, first working my way backwards through it: I read a paragraph at a time from the end of the book, which keeps me from getting involved in the story and enables me to pick up more errors. I’ll also write a selection of cover blurbs for it. I want to get this book sorted because I promised it to Macmillan in September. After that I’ll do the just same with the other two books, and they’ll probably be ready to send off over the ensuing couple of months. What next?
While writing these books I extracted a whole plot thread concerning a character called Tuppence, his sidekick troodon dinosaur (who used to be an exotic dancer) and a being called ‘the client’. This I then turned into a novella I sold to Asimov’s called The Other Gun and which was published in the April/May issue of that magazine this year. 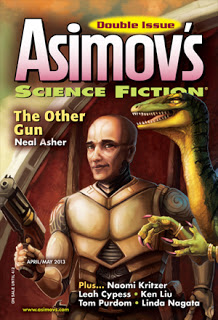 When I removed the Tuppence thread I also removed a thread about another character called Dr Whip (and no, he’s not into SM). I in fact dumped both threads into one file before later separating them. So next it will be time to get to work on the story of Dr Whip, a man who has been radically altered by Penny Royal. I’m looking forward to letting myself go with that once I’ve finished all the drudge work on the three books above.