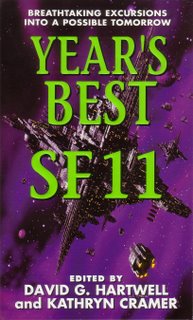 A story called Mason’s Rats appears in here. I wrote it ages ago, then went on to produce Mason’s Rats II & III. The first two were published in issues 2 & 4 respectively of Orion (’92 & ’94). All three stories were then released as a booklet by Graeme Hurry’s Kimota. When in 2000 I finally got into ‘big publishing’ I had the pleasure of meeting an author whose books I’d enjoyed for about a quarter of a century – Tanith Lee. We met, chatted, exchanged books, and some time later I also gave her a copy of the little Mason’s Rats booklet. She loved it, and asked if I minded her sending it to Gardner Dozois at Asimov’s. I didn’t refuse.

Interestingly I’d already sent a short story to Gardner called The Veteran, which he accepted and published in the Asimov’s of June 2004 (also went on to be published in Japanese publisher Hayakawa’s SF Magazine, May 2005 issue). He also accepted Mason’s Rats I. It’s a tight and very short little story, amusing (I think) – something to enjoy but certainly not something to write huge dissertations about.

Yet here’s the weird bit. When the first story first appeared I found a review on the Internet – of the political ramifications and deep significance of this or that – that ran to more words than the story itself. When the story appeared in Asimov’s, a reviewer called Dave Truesdale slammed it in an editorial on his site Tangent somehow infering from it that I was a left-wing PETA-supporting animal activist, and demanding to know who accepted it because ‘readers have a right to know’. Of course my reaction was bewildered hilarity. A little bit of a row developed on the message board there, and now it seems that whenever rats are mentioned on the Asimov’s message boards, that story is often refered to.

It was all very strange.