Skip to content
Well it is Zero Point for this book because apparently people are already receiving their copies from Amazon! Don’t forget to order your copy of Zero Point. 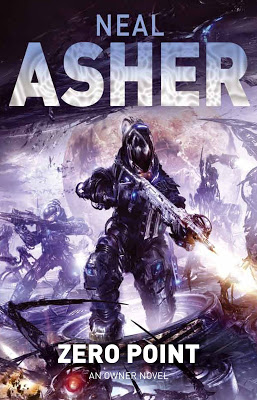 The billions of Zero Asset citizens of Earth are free from their sectors, free from the prospect of extermination from orbit, for Alan Saul has all but annihilated the Committee by dropping the Argus satellite laser network on it. The shepherds, spiderguns and razorbirds are somnolent, govnet is down and Inspectorate HQs are smoking craters. But power abhors a vacuum and, scrambling from the ruins, comes Serene Galahad. She must act before the remnants of Committee power are overrun by the masses. And she has the means.

Var Delex knows that Earth will eventually reach out to Antares Base and, because of her position under Chairman Messina, knows that the warship the Alexander is still available. An even more immediate problem is Argus Station hurtling towards the red planet, with whomever, or whatever trashed Earth still aboard. Var must maintain her grip on power and find a way for them all to survive.

As he firmly establishes his rule, Alan Saul delves into the secrets of Argus Station: the results of ghastly experiments in Humanoid Unit Development, a madman who may hold the keys to interstellar flight and research that might unlock eternity. But the agents of Earth are still determined to exact their vengeance, and they are closer to him than he knows…