Skip to content
It seems they’re using a slightly different cover for the US version of Zero Point, but it’s still a Jon Sullivan picture so good stuff as ever. However, they seemed to have screwed up: it’s ‘Owner’ singular…

Update
Jeremy Lassen informs me: That was an early version of the cover that made it into the wild before we fixed the plural thing. The actual books are right, and the incorrect version currently at amazon is hopefully being overwritten this week.

Night Shade Books are publishing The Owner Trilogy in the US and have scheduled The Departure for publication Feb 5, 2013 with Zero Point following May 7, 2013 and Jupiter War  September 3, 2013 (catching up with publication of that last book in Britain). Nicely keying into that my short story The Other Gun will be appearing in Asimov’s April/May issue that year with, of course, mention of these books in attached biog. It should be an interesting year with those three books slamming into the American market in rapid succession. In essence this should work as quite a profile-raising exercise. 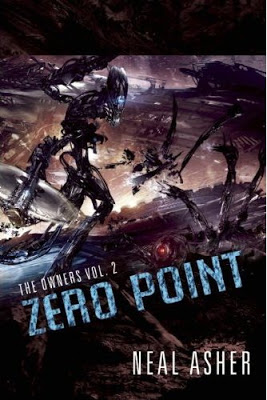 Meanwhile here’s a Walker of Worlds review of the book:

Asher doesn’t fail in making this second volume of the Owner trilogy a step up from The Departure, adding in plenty to keep the pages turning. For those familiar with his Owner short stories there are some nice treats in store, and for those that haven’t…. well, what are you waiting for? In short, Zero Point is well worth reading, and I will be very much looking forward to Jupiter War!