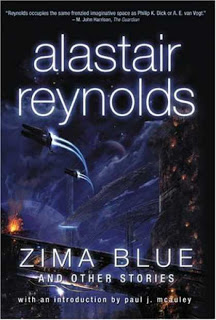 If you read and enjoy Alastair Reynolds writing then go buy this. It’s all wonderful engaging stuff. Oddly my impression was that all these were earlier short stories – written in the 90s or before – but on checking the afterword to each I see that quite a few of them were written post 2000 (or appeared then). Maybe my original impression came from a vague recollection of having read a couple of them and one of them definitely being set in the 90s. I particularly liked the trio of ‘Merlin’ stories because that vastness of time and space I look for in Alastair Reynolds stuff was all there. These were only slightly marred when, in Minla’s Flowers, a world leader who is somewhat war-mongering and murderous comes out with the line, ‘There’s no such thing as society’ – big clumsy clue there – and in the afterword we’re told that the inspiration for her comes from ‘a certain grocer’s daughter with ambitions to high office’. Ho-hum. But that aside this collection is still worth buying, reading and keeping.