Skip to content
I was on the beach the other day when someone said, ‘Is there a fire up there?’ From the mountains, in a long swathe, the sky was stained umber. ‘Probably the power station,’ said someone else, and the matter dropped from my mind (The power station up the coast often spews out a filthy plume – probably when it’s ramping up output to compensate when the wind turbines have stopped … because it’s too windy). 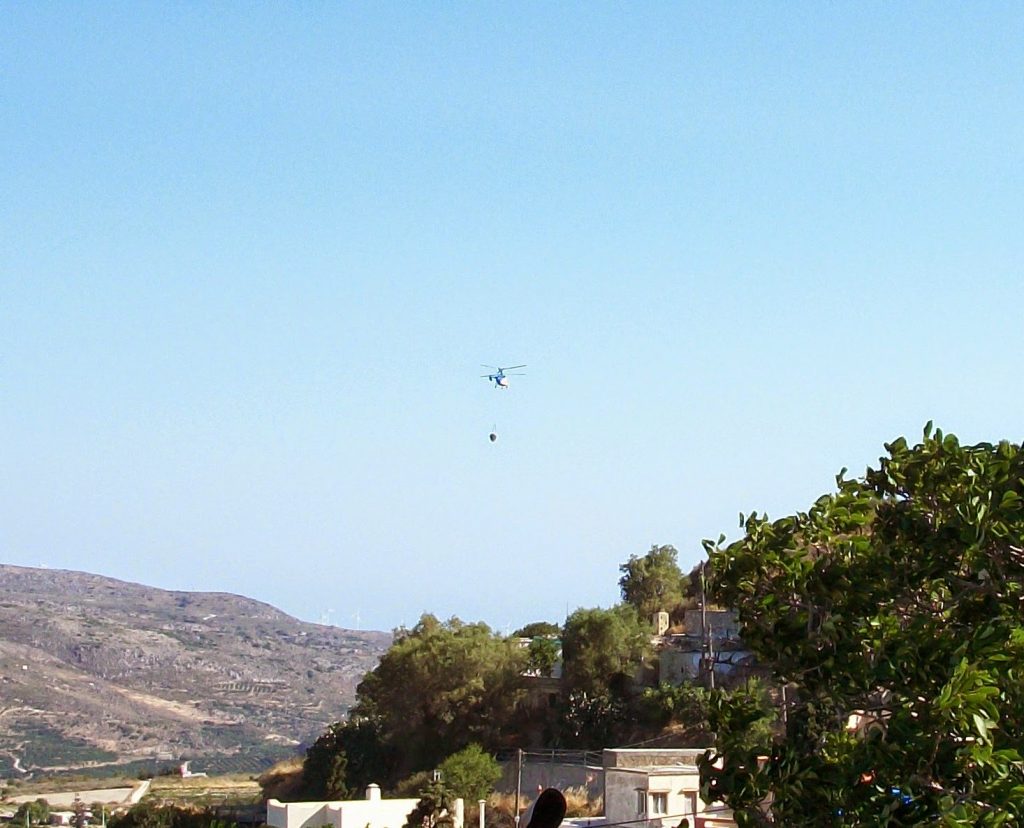 On a following morning Tim phoned me from Armeni to check if everything was all right at Papagianades – if the fire had reached that far. He then described the Armageddon occurring in the mountains behind my house and to which I had been oblivious until then. Only after that phone call did I walk outside and notice the helicopters flying over to pick up tons of seawater to drop on this fire. 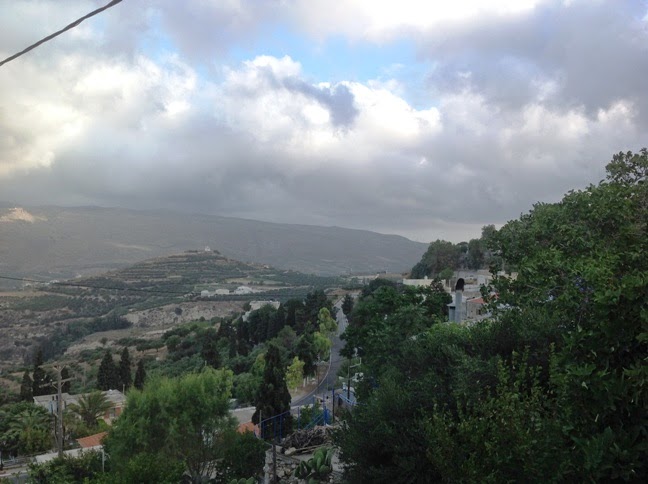 After hearing that the fire was out, I determined to go up and look, and take some pictures. I was especially concerned because the fire had burned across the areas I had been walking over during the previous months. The following morning turned out to be unseasonably cloudy, so good for a walk. I charged up my camera, found the bloody thing had decided to give up on me (the lens comes out then immediately goes back again – maybe a new battery required?) so picked up my Ipad and took that. The walk I took was a 6.5 mile circuit that sort of encompassed the fire. At no point, once I was outside of Papagianades, was the fire damage out of sight. 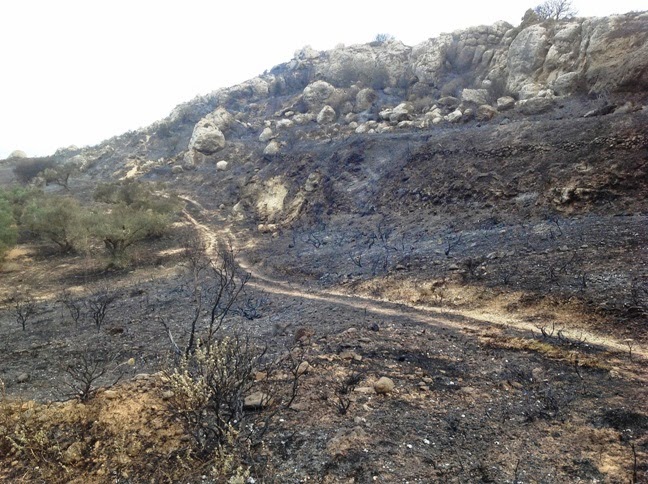 On the way up to the top of the mountain about a mile behind my house. 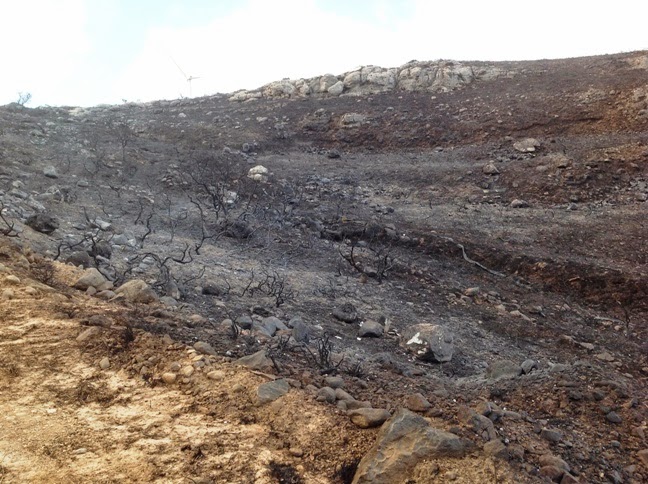 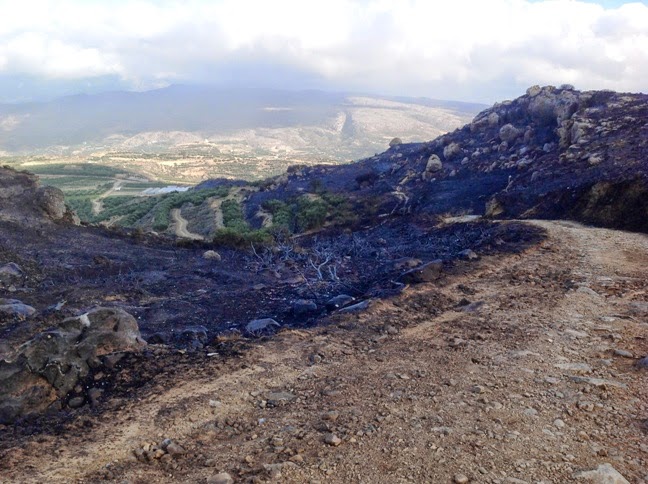 The view back towards Papagianades. 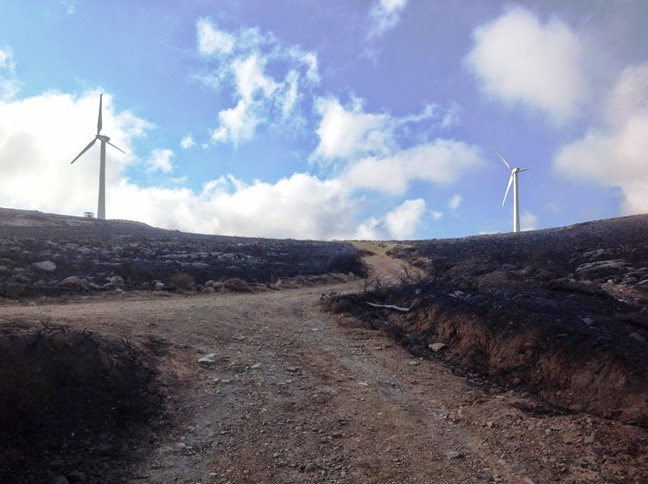 Up at the top. The wind turbines had been protected since they were surrounded by unburned growth. Chunks of melted fire hose scattered here and there were testament to the battle fought up here over a few days. 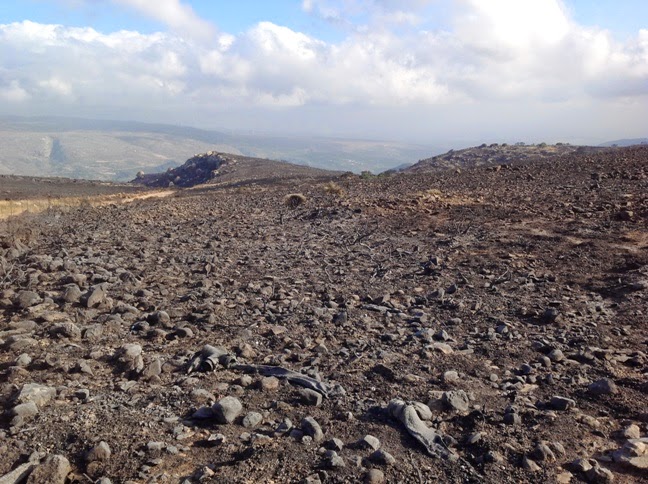 Some areas looking like those Var and Saul tramped through. 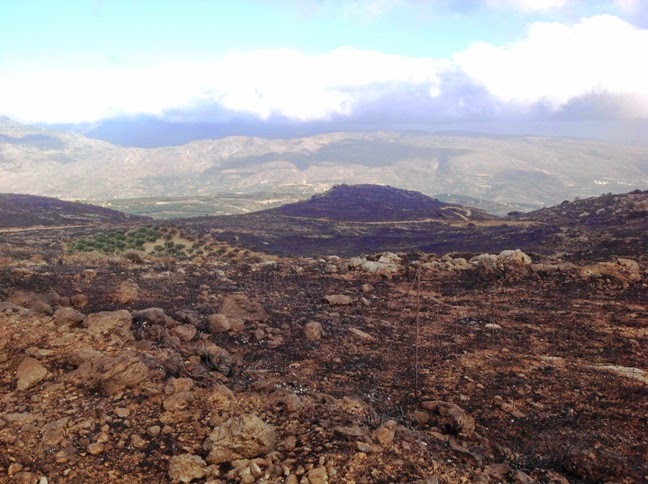 Burned out hill lying maybe two miles away from where I was standing. 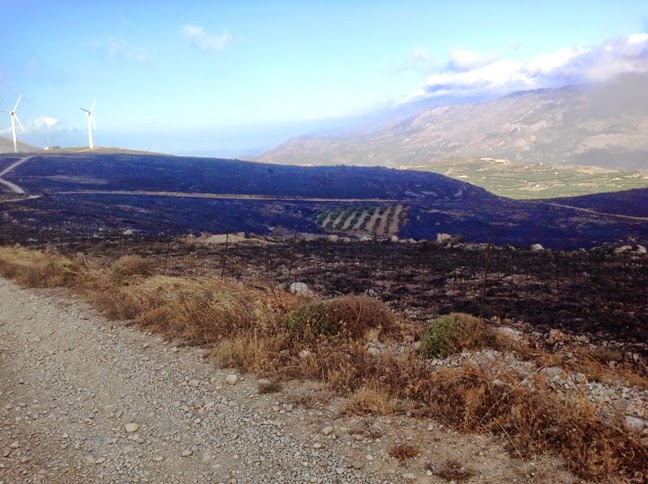 View along the line of the turbines. 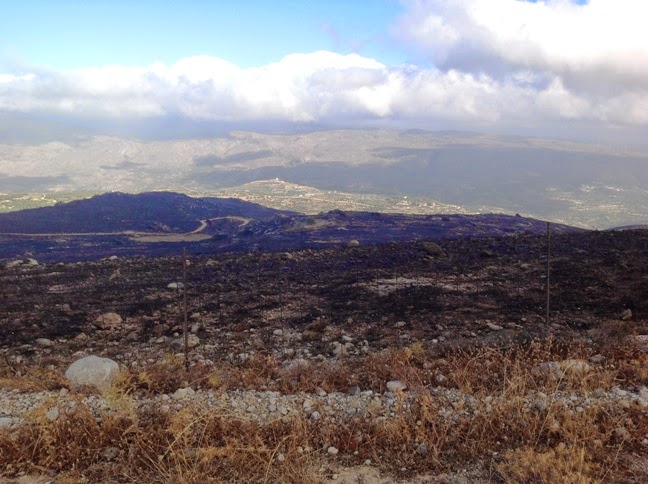 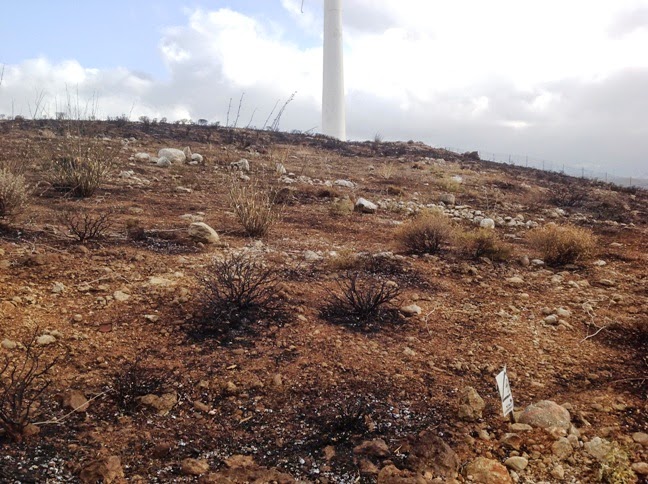 Must do a compare and contrast with this picture. Earlier in this blog you’ll find exactly the same view, though in the Spring… 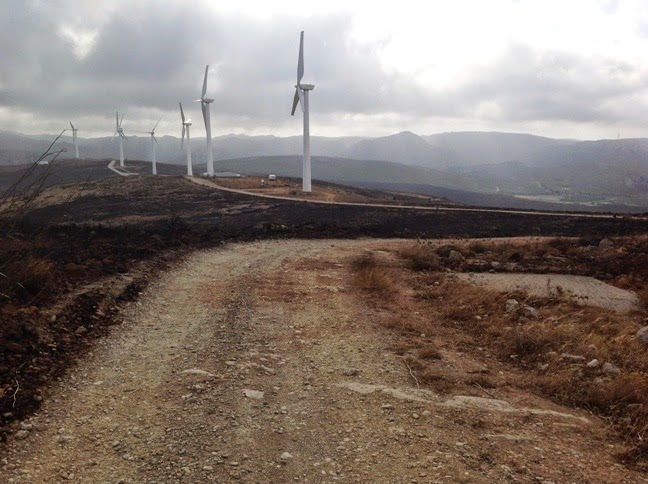 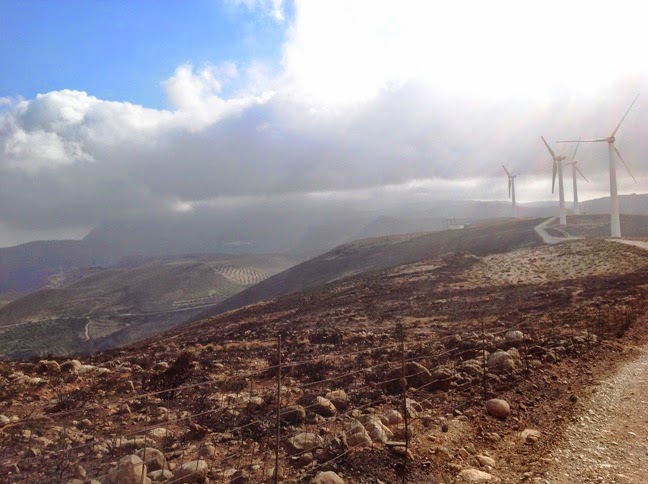 A couple along the line of the turbines again. 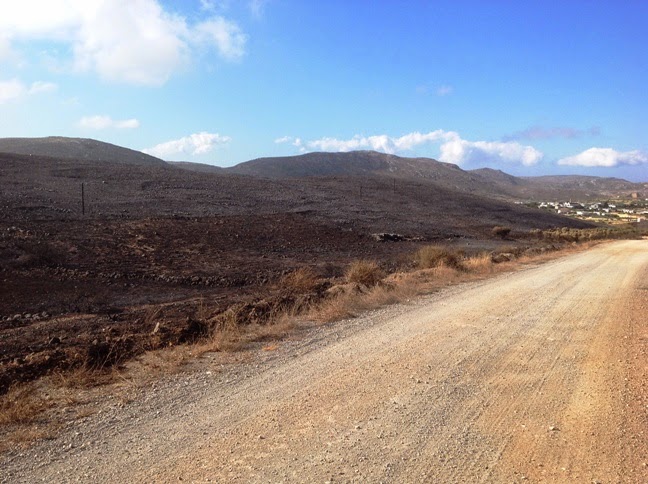 Burnt out slopes on the way down to Handras. 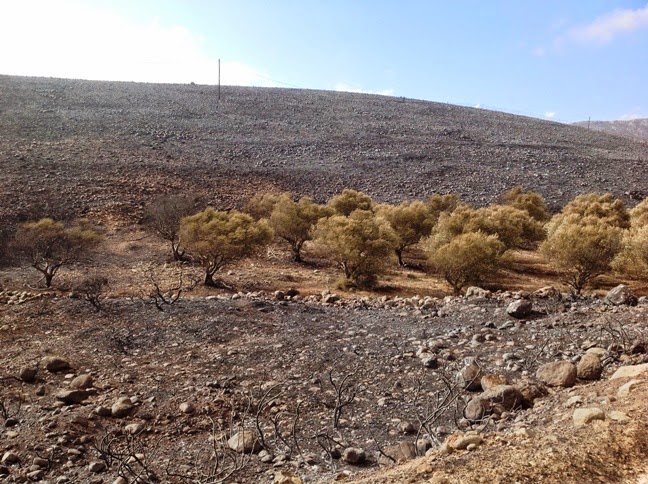 Slightly sick looking olive grove. Not sure how far beyond what you see here the fire went. It might have gone on for miles more. 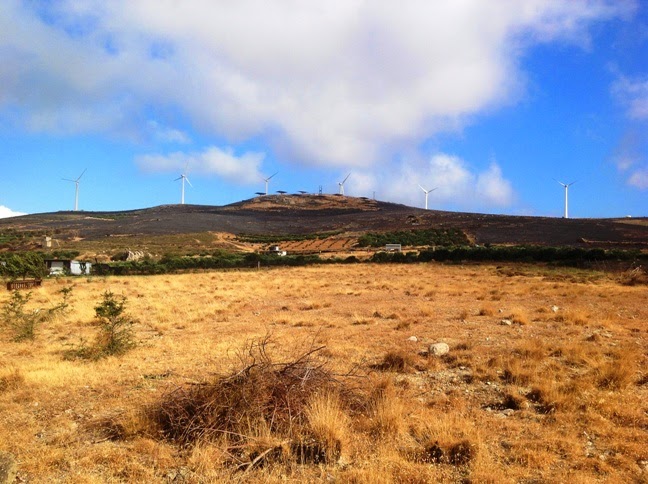 Looking back towards the mountains from Handras. 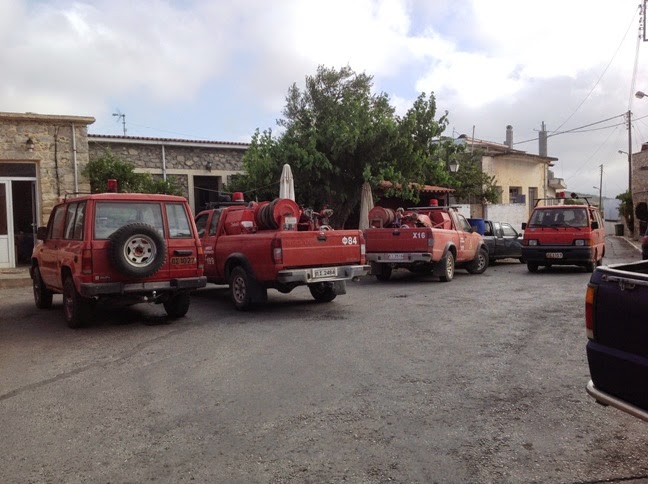 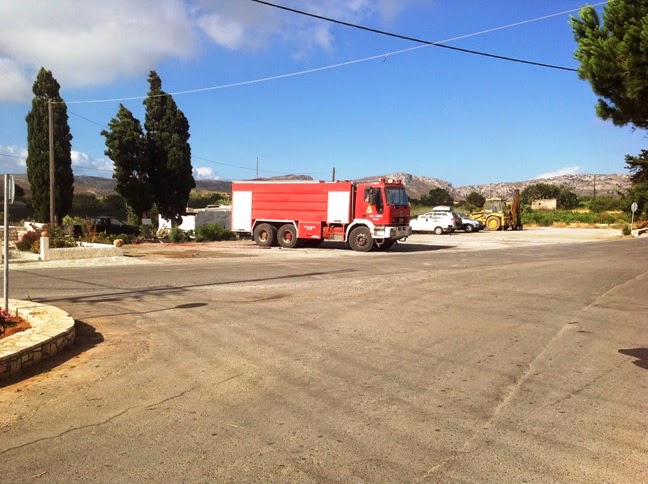 One of the many sentinel tenders parked all around the fire. Apparently they stay in the area for days just in case the fire flares up again.