I’m grumpy this morning. Doing my usual insomniac thing I was awake at 4.30 and just couldn’t get back to sleep. Next, upon getting up at about 5.30, I saw that rain had managed to get into the stove flue and sooty water had dripped over the tiles and splashed up the kitchen cupboard. This is doubly annoying because it leaked last week and, yesterday, I decided to solve the problem: the first section of flue sloped down as it entered the house so any water that came down the chimney and managed to get in the end would run inwards. I chiselled out the hole in the wall by hand to alter the slope of that section, then chiselled outside to ensure water coming down the chimney ran out of the wall (the chimney is set in the wall) and into a drain pipe connected to our waste water. I can only assume that our revolving French chimney pot, which has nicely increased the draw on the fire, isn’t keeping the water out, and that last night we had one of those ‘vertical sea’ rainfalls we get here. I need to buy an electric chisel to open up the wall to increase the slope of the drain and fit some kind of baffle.

But things aren’t as bad here as they are for our neighbour. Like us four years ago he is about to spend his first winter in a house that looks wonderful and is in a wonderful location, but was built before anyone thought of damp courses, has a soggy garden sitting against the back wall (three metres deep) with no drainage at all, and was renovated by the sort of monkeys who would sell you a car in England that looks okay until you get it round the corner, whereupon the filler falls out, the exhaust drops off and the engine heat burns a hole through the wooden piston. He has mud leaching through to stain the paintwork of his back wall, leaking windows and has already experienced the joys of stepping out of bed into a swimming pool. Later he’ll have the pleasure of watching his ceilings turn black with mould, and falling asleep to the sound of water dripping into buckets.

Friday 14th October
Here are some pictures for Chris Haringa and others who have visited Makrigialos over this last year. This disappearance of the beach seems to be becoming a regular yearly thing. From hearsay I learned that this has always happened, but from hearsay I have also learned that the beach used to be twice as wide (possibly until they built a rock barrier across the harbour). It gets eaten away like this when the wind is from the south and there have been storms out at sea (apparently). 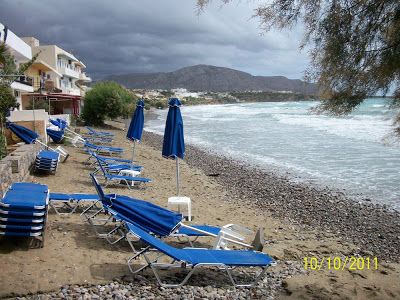 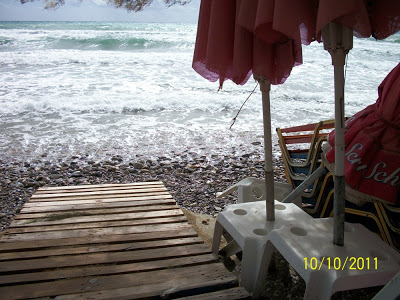 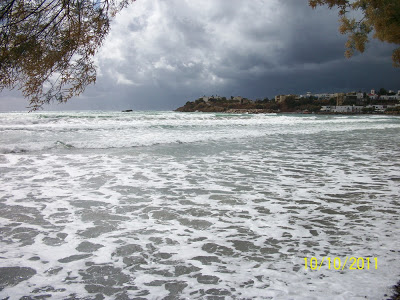 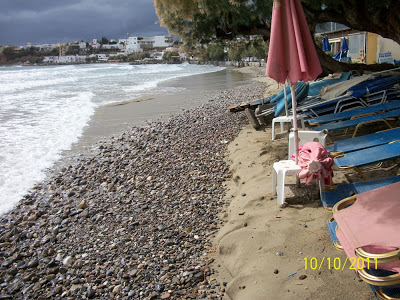 One must always take people’s assertions about what the weather does with a large pinch of salt. Weather changes by the hour, day, week, month and seasonally and it changes in cycles of years, decades, centuries and of course thousands of years and more. When someone told me it never rains here from June to August, I should have remembered that she had only lived here for three of four years, or when Yorgos in Revans was amazed by a heavy downpour in June, I should remember that he has lived here for a mere lifetime. Our weather forecasters can’t predict the weather, except in very general terms, for more than a week (though Piers Corbyn manages to do better than the Met Office super computer), so hearsay should be ignored. When someone cries, ‘This has never happened before, something major is changing!’ I should note that an ant here might say the same the first time its nest gets hit by the garden hose.

And here, four days later, the beach is back: 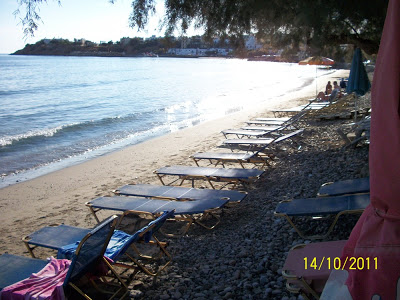 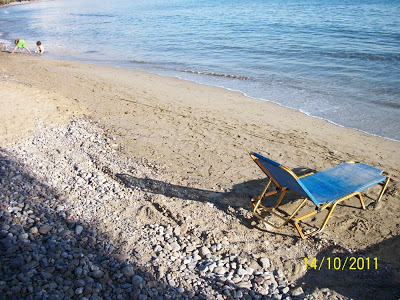 I’ve maybe solved the leaking stove flue problem. It leaked again on Thursday and I realized, by the position of the leak and the lack of rain, that the problem wasn’t really rain getting inside it. It is very damp here at the moment and the enamelled insides of the new flues are perfectly smooth. Condensation is gathering and running straight to the bottom of the flue and then into the joints, subsequent heating flexes those joints and boils the water in them, pushing it underneath the aluminium tape. I’ve now used heat-rated instant gasket on them and on the worst one wrapped round thin steel and a large jubilee clip, then the aluminium tape. Fingers crossed!

Monday 17th October
Well, using the perfectly unscientific method of estimating from how much buckets sitting out in the garden have been filling up, I would say we’ve had over a foot of rain during the last week and a half. The water butt filled up during the first day of heavy rain and I’ve now diverted the drain pipe so the water runs down the path to our house. I’ve no need to collect the grey water from the house, and I finished connecting up the drain pipe from the ‘ruin’ to take the water off the back garden. Thereafter I sealed various broken tiles and cracks (the second step between roofs is still in need of work and won’t be done this year, so there was plenty to do there) and now I keep checking the internal walls and ceilings in the expectation of seeing water coming in. I rather suspect our neighbour is looking for places where the water is not coming in, and is probably going to bed wearing a snorkel. 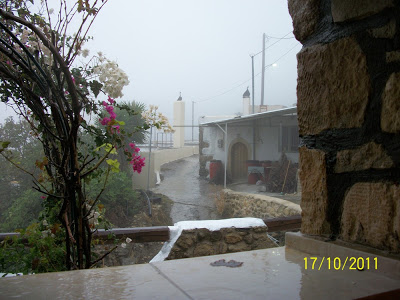 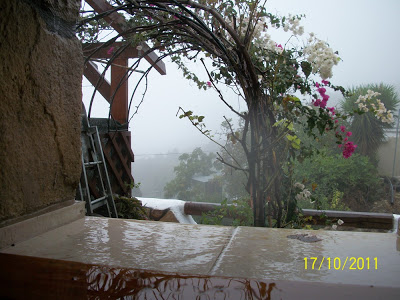 I see we have George Soros (the absolute apex of lefty hypocrisy with his righteous prating while sitting on a $22 billion fortune) funded protests on Wall Street and elsewhere in the world. The usual anti-capitalists are there, and all the sign-wavers are objecting to corporate power and profits, government-enforced austerity, governments supporting the banks, the rich getting richer and the poor, well, not getting richer, and a lack of jobs (and in the mix are a few puzzled looking hippies who dug out signs they used to wave about in the sixties). Some of what they are saying I absolutely agree with, and some not. Objecting about the rich getting richer is just the plain envy that is the engine at the heart of socialism. The lack of jobs should not even be in the remit of governments, and them creating jobs (usually in the public sector) is one whole chunk of the problem: using tax money to create jobs is like running a car by taking out the petrol, then spilling half of it while putting it back in again.

Austerity is a good idea, however, if that means hacking down the state sector, but it’s a really crap idea for wealth and job creation if it means ramping up taxes to keep the state sector funded. Even an idiot must realize that by putting up taxes you get a toxic combination of everything going up in price while people have less to spend. Supporting bankrupt governments is a mistake: we need something better than them mortgaging our future to support bloated parasitic state sectors. Supporting the banks was a mistake too: they should have taken a fall and those responsible should have been prosecuted for fraud. In fact (and I hate to say this), they should not have been allowed to fuck up so badly in the first place, because it’s true that they, and those wielding corporate power, do need to be controlled. Where was the legislation and oversight to stop them playing fast and loose with other people’s money? Probably either unavailable or unenforced, because the problem we have here is that our legislators, who managed to piss all our money up the wall and rack up massive debts, are precisely the wrong people to draw up the rules and enforce them. You don’t put paedophiles in charge of the day-care centre. What’s the answer? I think it starts with a combination of ropes, lamp-posts and politicians, but then that’s just me.

Tuesday 18th October
I few days ago I felt a pain in the sole of my foot and, inspecting it, saw what looked like a thorn stuck in there. However, closer inspection revealed a white sac on the blunt end. It looked like a torn-off sting from one of the scorpions around here. My foot was hot and painful for just a few minutes, and then it settled down to itching, which it did for three days. If the sting had been elsewhere I would have gone through the skin with my fingernails, but then such itching is the same with mosquito bites so nothing unusual. I never found the rest of the scorpion, and I wish I’d kept the sting to put under my USB microscope!

Raki time draws nigh and, in preparation, Nectarius was here with three Albanian masons who stone-clad the back concrete wall of the kazani. Whether they were going to clad all the concrete I don’t know. It might be that the heavy rain or Nectarius’s generosity with the raki finished their working day. Certainly the stone already up needs pointing: 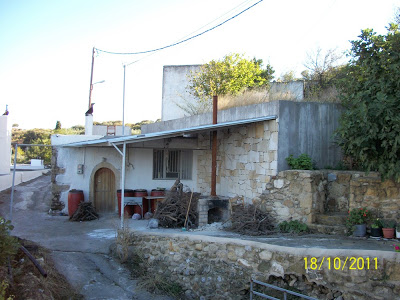 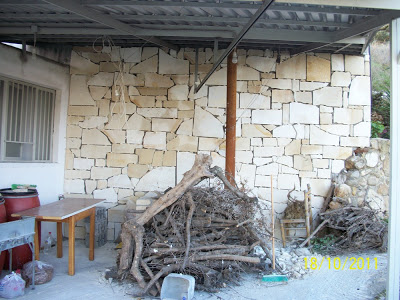 So Hamas are getting a thousand prisoners back in exchange for one Israeli soldier and of course consider that a victory. It occurs to me that the Israelis could assert that one of their soldiers is worth a thousand Palestinian terrorists.

We sat watching a satellite channel called Persian Star last night, which shows English language films etc. The commercial breaks are hilarious and consist entirely of adverts for hair care products, condoms and slimming pills. Apparently using the condoms results in couples leaping through falling rose petals, one of the hair products is a miraculous herbal cure for baldness and the slimming pills knock twenty-five years off fat fifty-year-old men and provide them with a six-pack. I just have to wonder if Persian Star is broadcast in Iran, and why the people involved haven’t been stoned to death yet. Or could it be that the way the majority of the people live there has little to do with the jingoistic drivel coming out of the mouths of their politicians (rather like us), and even less to do with religious fanaticism and nutters with bombs?