Yeah yeah yeah, as people have delighted in telling me I got the last two dates on my blog wrong. I put it down to losing track of time here and, frankly, not giving a toss. I might go and correct it or I might just leave it as it stands, for the historical record or something.

Work on the Tuppence thing continues apace but I have no word counts to write down. Roughly the chunk of text I had started off at about 18,000, lost 3,500, gained a 1,000 and has had all sorts of stuff completely rewritten. I reckon the end result will be a short story of about 20,000 (if you can actually call something of that length ‘short’).

Well, dancing to the Wii has resulted in me dropping 1 stone 4lb since January and I now weigh 12 stone 6lb, yet it still doesn’t quite feel like enough. It’s not the weight I want to lose, but the stubborn gut that seems to be clinging like a limpet. Maybe it’s loose skin yet to shrink to fit my new form (I wish). No more dancing now since in the afternoons we head down to Makrigialos beach, however, I have swum a few miles over the last few weeks and hope this will be enough to stop me turning back into Mr Blobby.

Saturday 7th July
As I’ve probably noted before here I’ve been a bit lax in my reading, in fact, until recently, I hadn’t read a book since April. The first book I started with, about a week ago, was Ben Bova’s Return to Mars. This was enjoyable in its way, but I started to get seriously annoyed with the central character. This semi-mystical half Navaho scientist was horrified by the idea of tourists on Mars, of hotels being built there, various tours, maybe people mountain climbing offered on Olympus Mons. These horrible ignorant tourists would be tramping all over the place, maybe picking up souvenirs etc. Mars, it seems, should be the preserve of serious scientists and academics only, none of the plebs should be allowed to go there and it should remain untouched by crass commercialism. Apparently the working plebs must put their hands in their pockets to pay for pure science, and how dare they expect that science to benefit them. 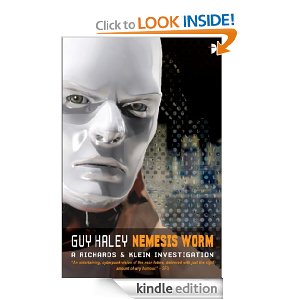 Having skipped through the last chapters of that book (and laughed at Mars being claimed by the Navaho nation) I then turned my attention to my Kindle. When I first got it I loaded it up with some bargain SF short story collections. I also picked up a novella by Guy Haley called Nemesis Worm, and this is what I started on. This was an enjoyable read and an enjoyable romp with an AI gumshoe and German cyborg on the trail of a homicidal AI. It was the perfect length for a beach read too. The only negative thing I would say about it is it needs a bit more copy editing as there are quite a few errors in there. For example, is it Smillie (which in my mind comes out as S-milly) or Smiley (as in George Smiley and Smiley’s People)?

Sunday 8th July
We’re into day two of a hot moisture-sucking wind – the meltemi (or it might be the sirocco – hard to tell up here) has arrived. Just like last year it is stripping the grapevine of leaves and leaving them green and crispy scattered across the garden or piled on the terrace behind plant pots. I’m coming to the conclusion that we’ll never get more than a handful of grapes off this vine because where it is on our house it’s just too exposed. Vines that produce up here are generally low and clustered together in fields or sheltered by other buildings. The wind is also stripping the datura tree and generally frazzling all my other plants – drying out their pots in no time at all. This is a bit of a worry because we’re going to Agios Nicholas for two nights from tomorrow for Caroline’s birthday. I might be losing some plants and our time in Agios Nicholas might be spent dodging tumbling umbrellas and generally finding places to shelter from the perpetual blasts.

I’m sitting on a hotel balcony in Agio Nicholas now with the luxury of WiFi. The ruddy wind is still blowing, I have a Metaxa hangover … ach, that’s all for now.