Damn, after a week of stillness or balmy breezes the Meltemi is back. Bead curtains have to be tied up to prevent them turning into Gordian tangles, chairs and tables are going walkabout outside. Our flowering tree, which we were told was a datura but which might be (according to Barry Arrowsmith) a brugmansia, had begun to put out flowers but now they’re being shredded. 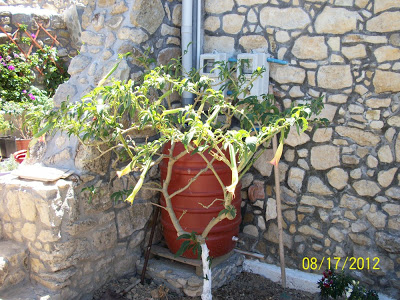 But on the plus side it is still lovely and warm, my chillies are doing wonderfully… 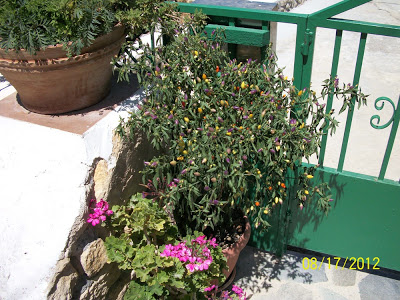 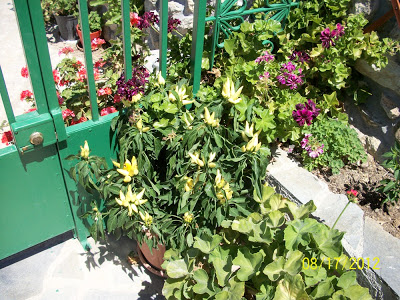 …and nothing is slowing the pace of my writing.

Penny Royal II is at 32,800 words is five chapters in and developing nicely. I’m presently writing a conversation between a King’s Guard (remember them?) and another prador who has been undergoing a rather odd transformation. In fact, if you wanted to nail my stuff with one word then ‘transformation’ wouldn’t be a bad one. Examples abound: the King’s Guard themselves and the prador king, the Old Captains, Vrell, Cormac … in fact choosing characters who do not transform physically or mentally would be a more difficult option. But I’m waffling, all fiction, in essence, is about transformation.

Friday 17th August
I would like to suggest, just mildly and by the way, as a point of discussion, that dog owners who allow their dogs to yip, yap or bark continually, especially in a hot country where most people leave their windows open, should be strung up from the nearest lamppost with a choke chain. I would just like to raise the point that while Tinkerbell’s yip yip yipping might be cute to you, that your neighbour is steadily emitting steam from his ears and would like to come round and stamp it into a fluffy smear on the floor. I would further like to suggest that Tyson’s deep and loud bark, to which your main reaction is an ineffectual ‘now now then’ and a secretive tensing of your testicles, is extremely irritating to others. Perhaps you should also consider that getting yourself a dog is not a great idea if you’re going to leave it alone either in the house or tied up in the back yard all day while you’re at work. You know, there is something about the continual yapping of a dog that makes me want to dress up in dark clothing, black out by face, and take a little wander in the darkness with a very large knife.
I’m just sayin’.

Monday 20th August
It’s starting to feel autumnal here already, but that may well be due to the constant wind having cooled everything off. It’s also the case, as ever, that when it turns hot in Britain it turns cooler here. I’m sure some weather forecaster would be explain to me why – doubtless something to do with where high pressure and low pressure cells are sitting etc. Hopefully it’s not going to be downhill from now on and we’ll get a rise in temperature from today what with the wind having eased off.

Ah, good news from Sheila Williams: my story The Other Gun has been accepted for Asimov’s.

Oh, and here’s an interview for SFX.