Part of the Standalone series:

Mason has a rat problem on his farm, a serious problem, for these rats are armed and dangerous. But he soon learns that rats in suits are even worse.

What do you do when rats invade your barn? Kill them or negotiate? Mason finds out the hard way that force does not always work!

An allegory of war and violence? A statement on the arms race? Neal Asher’s work takes Orwell’s Animal Farm into a grimly humorous future where evolution is outrunning humanity.

You may never trust a rat again!

“I’ve never read anything like MASON’S RATS before … it’s sharp, funny and highly inventive. There’s more fun in this one slim volume than in many a full-length novel!”
– Stephen Gallagher

This can now be bought for Amazon Kindle: 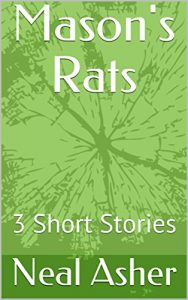