I stopped in at a pharmacy in Makrigialos the other day to stock up on Depon and Brufen – the versions you buy here respectively of Paracetamol and Ibuprofen. I stupidly wasn’t paying attention when I bought them, probably because someone we knew was in the pharmacy, because we were in a hurry, and I was vaguely grateful to be able to change a €50 note. Only afterwards did I realise that I’d been charged rather a lot, and only later still did I decide I had been ripped off and become determined to go back and raise a stink, even more so when I checked the receipt.

It made no sense. The Depon was correct: I bought two boxes at 78c each – the price was on the boxes. The prices were on the boxes of Brufen too, one was €2.04 the other was €7.76, and I was charged in total €15.22 for them. Boiling, I went into the pharmacy demanded to know why I’d been charged so much. Apparently, so the pharmacist told me, the price on the boxes is irrelevant. It scanned at €7.61 a box which is the price I would be charged in any pharmacy in Greece. I said this was crazy since I was paying about €2 last year and demanded and got my money back.

So what the hell is going on? One point to note is that you simply cannot buy drugs in a supermarket here – one of those closed shops that kills business here – but whether the prices are set by government or the pharmacists I have no idea. Maybe the Greek company that supplies these pills is on the ropes and has whacked its prices up, which is the usual silly reaction here. After this episode I checked British prices. Here the pack of Brufen contained 20x400mg pills. You can buy a pack of 16x200mg Ibuprofen pills from ASDA for 41p, which works out at 5.125p per 400mg, so multiply that by 20 and you get £1.02. €7.61=£6.18 so for the equivalent here I would be paying six times the price. Madness, but then, you’ll get ripped off in either country. If I want one of those blue inhalers in Britain I have to go to the doctor’s, get pilloried about my smoking, then take a prescription to the pharmacy and pay the prescription charge of between £7&£8 for one inhaler. Here they can be bought over the counter for about €3 (£2.43) … well, that was last year’s price…

Monday 11th June
I finished off some bits and pieces on Sunday and now, but for an irritating double light switch – I bought a new one but the way it is wired up is completely different so now the old one hangs out the wall since the thickness of tiles makes it a bastard to secure – and some end shelves I have to build at some point, the kitchen is complete. On Saturday we even managed to get the remainder of the door handles. Apparently the shop managed to get hold of them from another branch in Athens.

The temperature has soared here. Yesterday, when I remembered to move the temperature sensor to the shade, it read 32C, though part of that may be due to it sitting on warm tiles and not having quite cooled down. Most of the evening we spent sitting outside playing Yahtzee, well, until our ancient eyes failed us.

The first succulents are now flowering round the garden stepping stones and I’m glad to see I have the full range of colours. Lilies and other flowers are opening too. I have two small shrubs growing called Monk’s pepper (it produces peppercorns) and have bought mandarin and apricot shrubs to replace a couple of the yuccas on the bank. 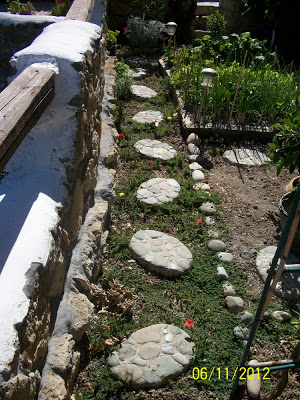 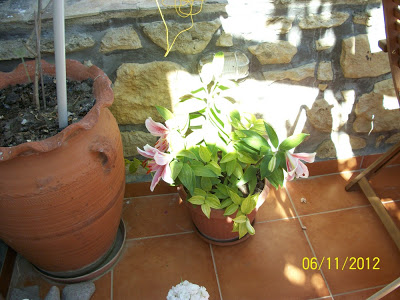 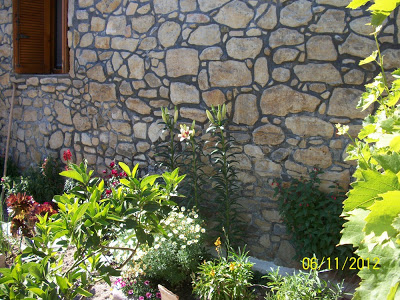 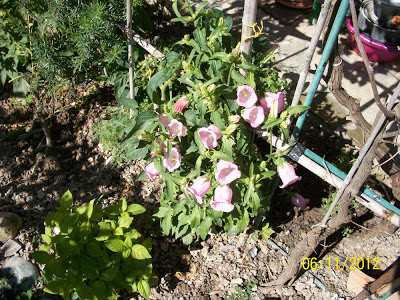 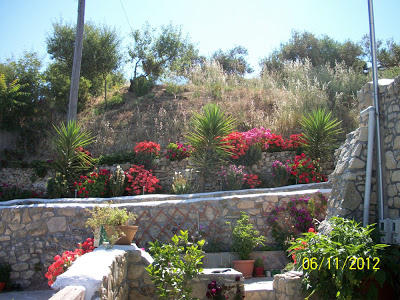 Things do grow really well here, which is why so many Greeks are now retreating from the cities to the countryside where they can at least survive, which is an advantage they have over countries like England. I suspect that if Syriza get in next weekend this exodus will increase. In its way Greece is a microcosm of the rest of Europe: big sprawling high-spending socialist and often corrupt governments (including that crowd of jerks in Brussels) have completely arse-fucked their countries. Realizing far too late that the answer, surprise surprise, is to stop pissing the money up the wall, some have tried ‘austerity’ (ho ho). Unfortunately, they can’t stop spending, since most of their citizens, having been turned into employees, dependents or clients of the state, want the money to keep flowing so vote them out of power, then vote for the empty promises and impossible to finance plans of those parties even further to the left.

Meanwhile, others are stepping further to the right, as sure as those voting for the other wing that more authoritarian government is the answer. It isn’t.

Tuesday 12th June
I’ve got a little bit of a hangover this morning and am struggling to get going. I blame Toplou. Surprisingly for an island covered in grapes and supplied with 300 days a year of sunshine Crete is lacking in good wines. Most of the local stuff is pretty rough, the only decent red wines are in Lidl and from South Africa, Australia and California etc, and since in such a hot climate we like chilled white wine we had settled on cartons of a white wine from the same shop, imported from Italy. However, our Belgian neighbour introduced us to a wine made at a local monastery called Toplou (this means ‘with the gun’, apparently – the monastery has an interesting history). It is very nice and very more-ish, and I certainly had far too much last night. Zero alcohol today. An ophthalmoscope down my throat would reveal my liver waving a white flag. 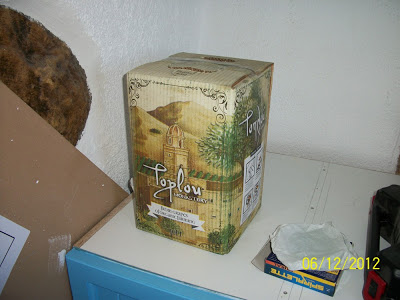 Final plot elements of Penny Royal (1) are slotting home nicely, with a sound like a knife being drawn across a sharpening steel, and I’ve found a way to drag in a gabbleduck and the Technician, and have other elements in place for the start of the next book. Currently this one stands at 118,000 words and so, if I keep up my present pace, is maybe a few weeks away from completion (Cowl was 125,000 while The Line of Polity was 175,000, and between those two figures has always been my target), which should put me one year and two months ahead of Macmillan. Thereafter I’m considering diving straight into the next book, and then the next. It would be seriously gratifying if I could get three books done before the first has to be delivered – books in the bank, so to speak. I would have completed my five-book contract with Macmillan and put myself three years ahead of their present publishing schedule. Maybe then I would feel ‘safe’ enough to turn my attention to the fantasy trilogy in my files, maybe the contemporary novel there (though it’s not so contemporary now – not a mobile phone in sight) or tackle a load of short stories. Then again, maybe I’ll do some short stories after this one, maybe a novella or two – I haven’t sent anything to Asimov’s for years and there’s always the Kindle route to explore further.

Wednesday 13th June
After I polished off my 2,000 words yesterday, and it being very hot and still here, we headed down to Makrigialos for a swim. We had absolutely no problem getting sun beds next to Revans bar – there wasn’t anyone there. It was 30C there, the sea was lovely and warm and a slight breeze prevented us from feeling like we were being grilled. Scanning each direction along the beach I counted fourteen people sunbathing or swimming with maybe another four over on the harbour beach … on June 12th, nearly halfway into the first month of the tourist season. Not good.

Thursday 14th June
Yesterday the beaches were again nearly deserted, as you can see: 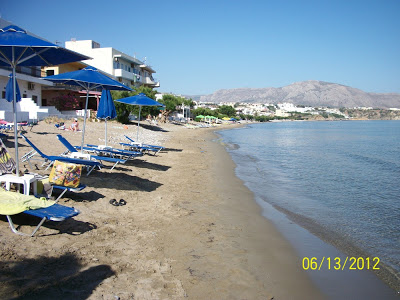 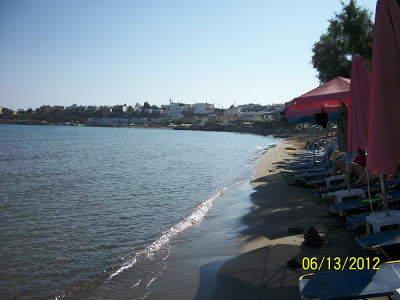 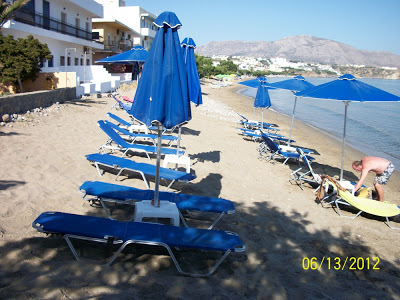 I must also take a photograph of the practically deserted high street. I have to wonder how some people are going to survive in business here, like Makis, who had a gyros shop on the street before but last year opened a big place on the harbour, or like the English couple who opened a bar on the beach and who will, therefore have to stump up rent unlike many of the Greek-owned businesses. Meanwhile Yorgos at Revans is insuring he actually has some beach to put his sun beds employing a piece of earth-moving equipment called Ali: 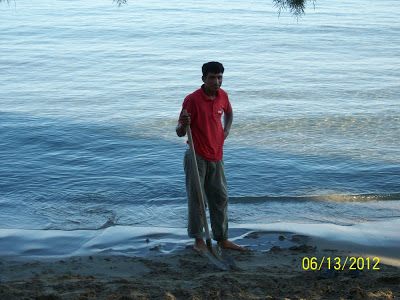 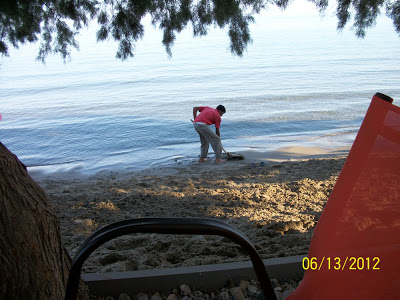 I’m slowly coming to the conclusion that our garden must be radio-active. With the succulents I plant around the stepping stones I started off with red, then pink, salmon pink and yellow flowers. Last year white ones appeared and quite possibly an orange one, though I’m not sure. Now we definitely have two shades of orange: 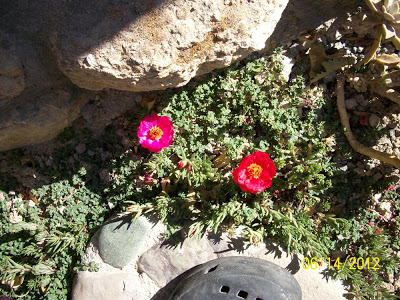 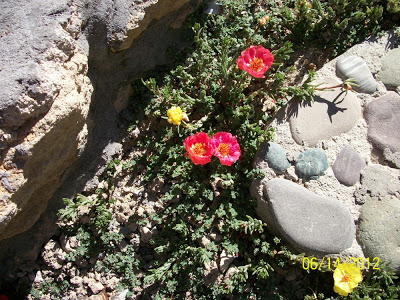 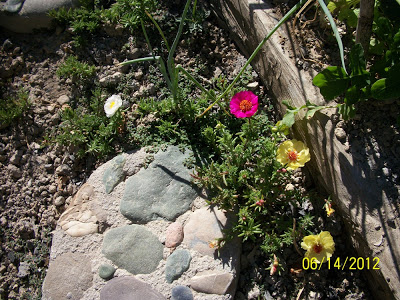 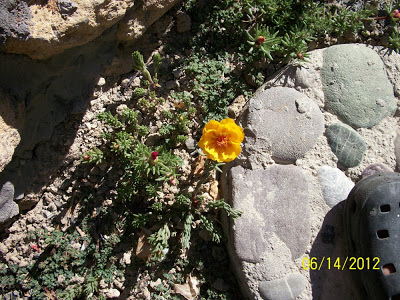 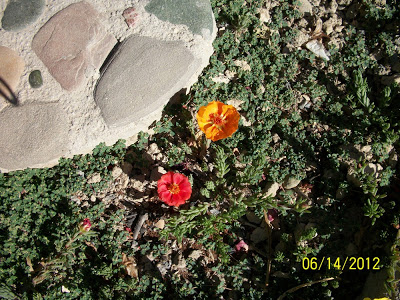 Friday 15th June
Not being a particularly trusting soul (and having wrenched my back a bit) I went to the pharmacy in Koutsouras to check on the price of that Brufen I mentioned before. It turns out that a box of 400mg Brufen does cost €7.61, which is of course ridiculous. However, what the chemist in Makrigialos failed to mention was that a box of the same number of 600mg Brufen costs €2.85. Go figure. Apparently, because the 400mg are the most popular, that’s the one the price has been racked up on. I submit that should only work as an income-gathering strategy if people are too stupid to figure out how to cut a pill in half. Um, I’ll stop that line of thought right there.