You would think, with all the problems Greece has, all the austerity, riots, wage freezes and sackings and people shooting themselves outside parliament, that there would be some effect on prices here. Things should be cheaper, and almost certainly they would be if Greece didn’t have that huge millstone round its neck called the Euro. Instead, everything is getting more expensive as the government sucks harder and shoves up business costs, and while the Greeks pursue their idiot inclination to screw the maximum money out of every sale rather than reducing prices to sell more. Let me give you an example.

Last year as we completed work on our ‘ruin’ we of course wanted windows. From a local supplier they were more expensive than what we would have paid in England, however, because of the hassle involved in getting hold of anything cheaper, and of course the extra cost in shipping or whatever, we just paid up. After that we wanted a 2 metre kitchen unit with integral sink. This was silly money, but we paid it anyway. However, on the basis of the price of that unit and sink I damned well wasn’t going to buy a new kitchen here for the main house.

Instead, while in England, I went to Screwfix then a carrier called Nomad. The result of this is that we’ll get a flat-packed kitchen, consisting of 3 metres of work-surface, six cupboards plus doors and a sink with all taps and fittings, delivered to our door at just £100 more than we paid for the unit up in the ruin. Of course I’ll have to fit this all myself but it’s not exactly rocket science. Without any tiling I reckon on a couple of days of work. End result? Buying the kitchen in England, paying to have it shipped and then spending two days fitting it myself will have saved me, at a minimum (because I’ve heard how much others have paid for their kitchens here) about €3,000.

It’s a ridiculous situation and, until Greece gets out of the Euro, until it brings its prices down to where they should be, which by some estimates are a third of what they are now, until someone lets the pus out of its artificially inflated economy (and bloated government), it’s not going to change.

Here’s another price for your delectation: petrol is now €1.95 a litre here.

Ooh, bit of luck today: Michalis arrived with his strimmer, which he was going to loan to me to knock down the weeds on our bank, and did the job himself. 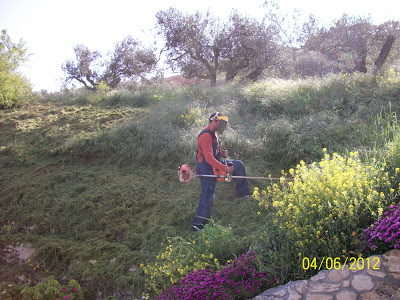 Saturday 7th April
Yesterday I only managed to write just over 800 words rather than my target of 2,000, but never fear, I have justification. I’ve reached a point in the story where I’ve realized I been overdoing it with the plot threads. Two characters seem to be blending and indistinct, and one of them is turning into a complication that distracts from the main thrust of the story. I’ve mentioned this character before. He’s called Tuppence, with his sidekicks Dr Whip and a troodon dinosaur called Harriet. I really enjoyed writing about these – their general weirdness, power and strange motivations – but they are too much. I am, therefore, stripping out the entire plot thread involving them. 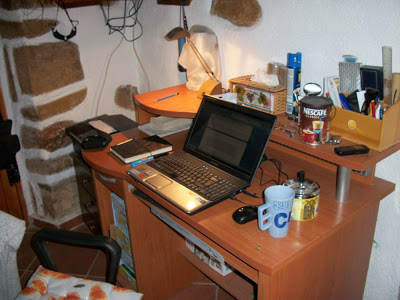 I don’t know who said it, and I’m not entirely sure of the exact quote involved (of course if I was on the internet I could give it to you verbatim and appear knowledgeable) but someone said that in writing it is necessary to kill your babies. This is what I am doing now. But in reality this particular baby, or collection of babies, won’t die. I’ll transfer the thread I strip out into a file called ‘Tuppence’ and it is quite likely this will form the basis of either a novella or another book. Thereafter, with the present book reduced by 18,000 words from 88,000, I can concentrate more on the main threads, the main characters: Isobel Satomi, Thorvald Spear and Penny Royal.

Monday 9th April
We’ve had four days of lovely low twenties weather which, with the powerful sunlight here, means shorts and sun lotion (especially on my nose). Over the last week I’ve been tracking the temperature at 9.00 in the morning every day and it climbed from 12 to 18. Now, however, it’s dropped back down to 12. No matter, since it’s still a lot better than it was this time last year.

I just watched a BBC report on alpine resorts going green. Apparently they need more power there but don’t want to spoil the mountain views with power lines. The answer? They’re building great big banks of solar panels which of course look so much better. I despair.

I’ve always been of the opinion that if I was to get something like lung cancer or oesophageal cancer (like my brother) I wouldn’t bother with treatment other than pain killers and, at some point, sleeping pills and a plastic bag. The odds for both of these have always been crappy, something like one in twenty of surviving for five years, with treatment. I’ve seen what that five years means with a neighbour who died of bowel cancer. You might survive for five years but you don’t live them. At the beginning of his treatment he had six ‘good’ days a week and by the end of it he had none. On balance, how many ‘good’ days would he have had if he’d had no treatment at all? And with by brother I’ve seen what it means when the treatment doesn’t really work at all.

However, my opinion is in a state of flux, mainly due to reading numerous science articles on various sites and the generally optimistic stuff on places like Singularity Hub. We’re right on the edge; we’re entering the age of miracles. When you read threads in which scientifically literate people are seriously discussing whether or not any of the baby boomers will enter the age of permanent life extension you have to think a bit more deeply about these things.

A few years ago I read about a scientist who had managed to tissue engineer a human bladder, now I read that he’s making these things constantly and implanting them in people who need them. I’ve always been fascinated by the development of exoskeletons, now one example has passed all inspections and is actually being used … cripples are walking. Stem cell advances are occurring every day, heart muscle and other tissues being renewed. Magic bullets for various cancers are being designed all the time and the odds of survival just keep on changing. I was reading about new treatments and understanding of Alzheimer’s almost on a weekly basis, which is why I would say to Terry Pratchett, just hold on a minute. So, in the light of just these few examples I take the view that maybe a visit to Dignitas should be delayed for as long as possible. You could be taking that drink just at the moment that someone, somewhere, is having a Eureka moment.

Wednesday 11th April
So much for the wonderful sunny weather here. On Monday the morning temperature dropped 6 degrees with cloud gradually filling up the sky. It started raining in the afternoon and ever since it’s been cloudy and cold with frequent downpours. The forecast today is for sun all across Crete but there are no signs of it yet this morning – the 9.00AM temperature is 9 degrees.

I’ve again worked my way through Penny Royal and am back on the word counts hoping to polish off 2,000 today.

I’ve been noticing how the exchange rate of the Pound with the Euro has much improved this year, well, for me. Last year I don’t think it went much above €1.16 but now it seems to be hovering around €1.21. Unfortunately I don’t think this means the Pound is on the rise, but rather that at the moment the Euro is winning the race for the bottom.

Saturday 14th April
Heh, as well as writing, gardening and doing stuff on the house I’ve found myself some more chairs to repair. The Belgian neighbour bought some cane furniture just like the chair I repaired a couple of years ago and two of them have collapsed. I suspect he bought them new. This was just the kind of furniture we originally wanted for outside, but five years ago decided it was too expensive. Seems we may have made the right decision. 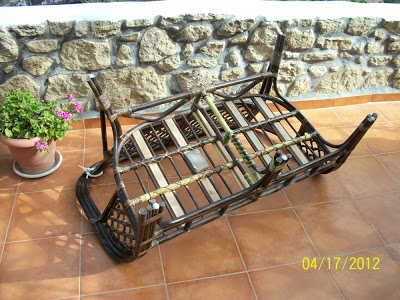 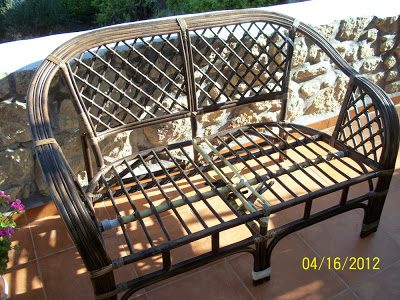 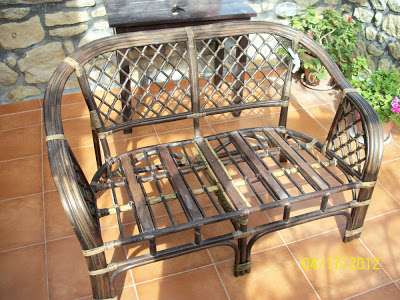 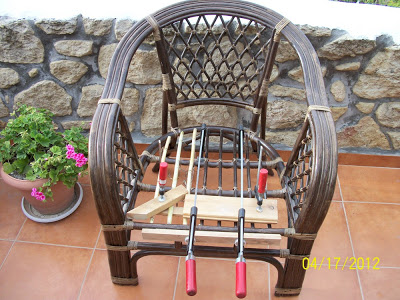 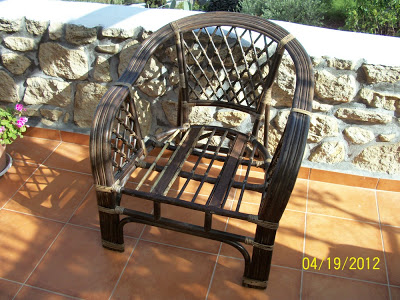 Monday 16th April
After severe weather warnings for the Midwest of America the tornados duly turned up, people are being killed and property is being damaged – all this coming after that really cool video clip of a bloody great truck being tossed about in Texas. And all throughout the reports on this is the implication that, ‘Oh my god! Something is changing! The weather is going crazy!’ I wonder, is the place where this is happening called Tornado Alley for a reason? Could it be that tornados have been having a yearly gathering there for hundreds, thousands or tens or hundreds of thousands of years? But it is absolutely true that something has changed in the last few centuries. Now, when the tornados touchdown and churn across the landscape like titanic wood routers they are no longer just tearing up grass, trees, buffalo or the occasional unlucky Indian. In the place of these are buildings, loads of people, trucks and cars and all the infrastructure of civilization. It’s the population, stupid.

Thursday 19th April
I was hoping our remaining wood was going to last until the temperature ramped up but it looks like that is not to be. Yesterday, it being cold with a wind sucking the heat out of the house, us having the stove on all day and having just a few days of wood left, I decided to go in search of some more. We’d been told of a local guy selling it for €100 a pickup truckload so via some friends in a nearby village sought him out. He’ll deliver either today or tomorrow, which in Greek could mean any time in the next few weeks, if at all. 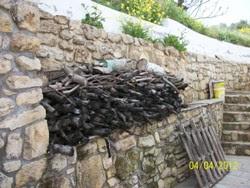 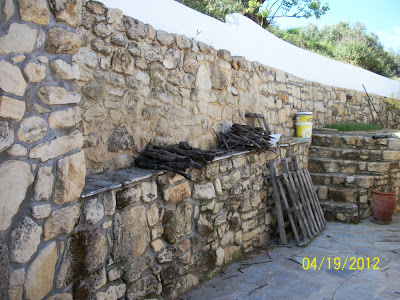 €100 is a good price because others have been charged as much as €180 for the same amount, yet I still wince at the price of wood here. Back in England I could venture out with a chainsaw and in a morning collect an equivalent amount in trees knackered by Dutch elm disease from a few hedgerows. However, I have to rationalize this. It costs two or three Euros a day to heat the house and I compare that to how I’m quite happy to spend €10 on a couple of carafes of wine in some local bar or much more than that on a meal out.

Oh, and now we’re getting some more wood delivered it’s still and sunny with the temperature rising rapidly. Meanwhile, for Paul and Heidi, here’s how the veg patch is looking: 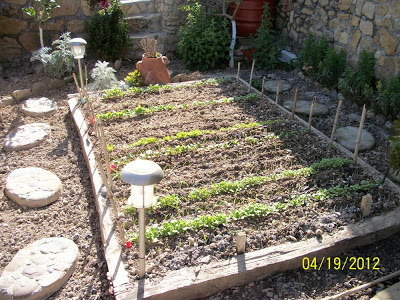