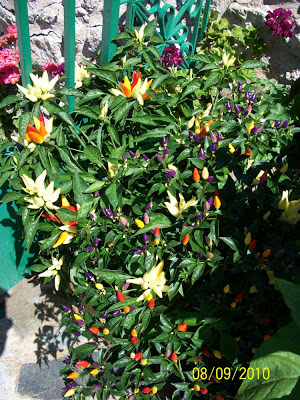 I finally managed to accumulate just shy of a kilo of assorted chillies and most of them being pretty damned hot I decided to bulk them out with a couple of red peppers. Into the pan I put a cup of vinegar and one of sugar (though part of that sugar was actually honey). I blitzed the chillies, the peppers and a whole bulb of about twenty or so cloves of garlic and bunged them in the pan too. I started heating this, to melt the sugar and render things down a bit, but noted that the whole mix was a bit dense, so added another cup each of sugar and vinegar. I brought it to the boil, let it cool a bit then whisked in a dessert spoonful of plain flower to thicken it. Still not the right consistency so I added another spoonful, then brought the lot up to a rolling boil ready to jar. I heated some jars (burning my finger in the process), scooped the mixture in and popped the lids on. There was just a little left over which went into a small bowl. In the evening we had samozas, bhaijas and spring rolls, dipped in this sauce and lathered with a peanut sauce Caroline had made. Absolutely delicious! 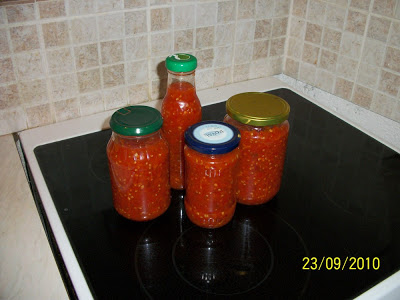