Skip to content
Wednesday 22nd August
That’s better: the wind started to die on Monday but the sea was still colder than usual. It died completely yesterday and the sea immediately turned warm again (and I was able to take a long swim without the wind blasting sea water into my mouth every time I faced into it to breathe) and today there’s little wind too. I was also hoping, what with the Greek holiday coming to an end, for the beach to be less crowded, but a wedding party of 32 people turned up to occupy the apartments beside the beach. Sigh.

But things are otherwise fine. Penny Royal II is rumbling along nicely with targets and story threads clear. As I wrote previously: Sheila Williams of Asimov’s has accepted my story (about 20,000 words) The Other Gun. I had half expected it to be rejected as too Polity-slanted but she says I have enough back-story there for non-Polity-readers to understand it. There was also the possibility of a response of, ‘Well, it’s okay but…’ Next, if I don’t use it in my present books, I’ll turn that Dr Whip stuff into a story and bang it off to Asimov’s too.

Sunday 26th August
Okay, time for a little catching up. I ran my niece and her boyfriend back to the airport on Friday and surprisingly (for me) was quite sad to see them go. Before they went they caught some very nice days here with the wind stopped and the sea temperature on the rise again and the same weather has continued ever since (though apparently the wind will be back on Wednesday). Now, with our visitors gone, I’ve been turning my attention to an important matter: chilli sauce. 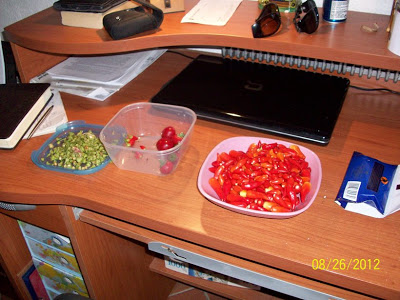 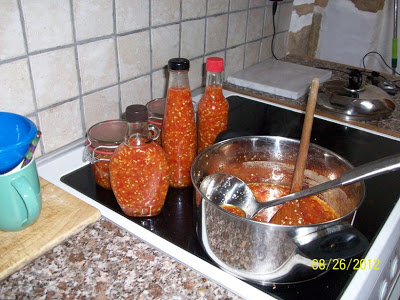 Having gathered in the first half a kilo of chillies I’ve produced a nice quantity to be going on with, and with the amount of chillies growing and the rate they’re ripening at I’ll probably be picking half a kilo every week. I’m hoping to take back to England a couple of 1.5 litre plastic bottles of the stuff. This time I won’t make the mistake of packing them in the centre of a suitcase surrounded by all the wires and adapters we take back. Last time, after my case was X-rayed, they had me open it – the combination of a large bottle of liquid surrounded by wiring arousing some suspicion. 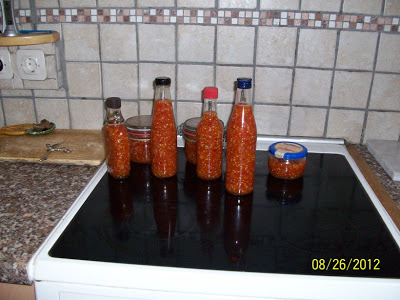 Monday 27th August
Right, in the tradition of many Internet blogs, time for some cute kitten pictures: 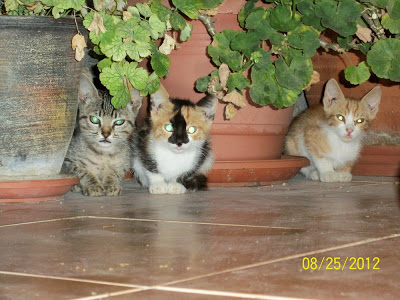 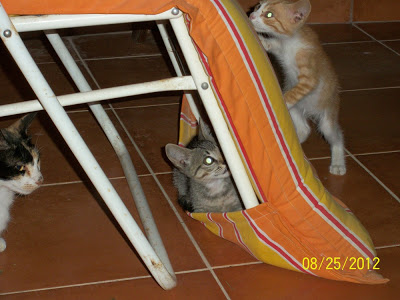 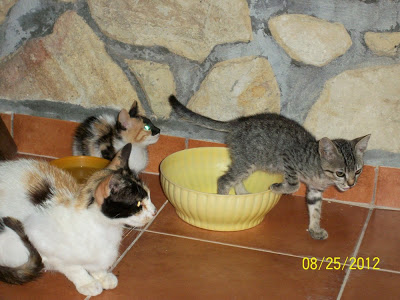 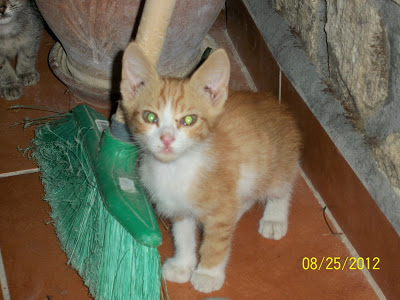 And now, in the cynical tradition of this blog, it’s time for a reality check. Previously there were three kittens but in the picture below you’ll see that there are now two of them – one of them with its eye closed up. There was no sign of the other one and the reason for that could be one of many. I know that there are weasels in the olive grove where the mother is keeping them. There are also sand martins all over the place (bit like a polecat or pine martin) and no shortage of birds of prey. Sickness is also an option as is that old favourite: a Greek boy with a rock. A local tosser with an air rifle is not to be ruled out either – a guy for whom I’ve made up a little aphorism: if you shoot cats all winter you end up with rats all summer. 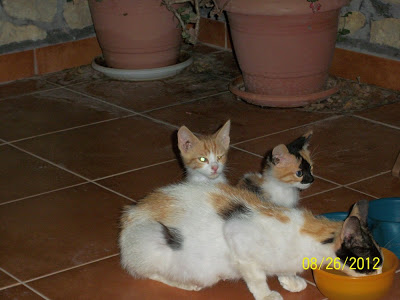 Tuesday 28th August
Really, some people just don’t get it. The batches of sun beds on the beach are owned by various establishments fronting the beach – they in fact pay rent for their section of beach and the number of sun beds on it. The ‘free for customers’ concept is a fairly recent one, brought about by the steady decline in trade. If you use a sun bed and don’t buy anything from the bar or restaurant owning it you’ll get charged by that establishment because it is, well, a business and not a social service. Charges for a pair of sun beds, plus umbrella, range from €5 to €10 on Crete. Therefore, if two of the four or five of you buy a bottle of water each at 60 cents, while the rest of you get your food and drink from the local shop, if you chop and change between sun beds while you’re there – occupying one of each pair so arriving couples cannot use them – and leave all your stuff scattered across them while you’re off for three hours eating a meal elsewhere, it is not beyond the bounds of reason to understand that the bar owner is going to be a little miffed.

The last few days have been hot, but not according to the thermometer. When outside up here it felt like it was in the 30s yet was in the late 20s, while down in Makrigialos it’s felt like it was 40C yet the thermometer read 30. The reason for this of course was humidity, which seemed to reach saturation point yesterday with the gravel between the bar and the beach looking like it had been hosed down, skin feeling clammy, dew dripping from the tamarisk trees and beach bags and clothing turned dark with damp. Now all is changing with the North wind coming back (predicted to be force 8 but just breezy up here at the moment) and the temperature here reading a few degrees down but feeling much lower. This bodes ill for the wedding ceremony due to be conducted at Revans bar on Wednesday. I predict sand in the buffet, the bride hanging onto her skirt and hat as she enters and any sound recording marred by the flapping of umbrellas and the roar of the wind.

My decision to write the trilogy of Penny Royal books all at once has been proved the right one. I’ve already gone back to the first book to alter a conversation by adding just a couple of lines, but they’re critical for the book I’m on now. Next I’ll be going back to alter the history of Riss – an assassin drone made in the shape of an ancient prador parasite (which resembles a cobra with an ovipositor extending from its tail, small grasping limbs under its hood and a third eye on top of its head). Riss must now be made a witness to what happened to factory station Room 101…