It’s been hot and humid for a couple of weeks now, not the usual dry heat, and lately the sea has been as warm as bathwater. Now I know that’s a description somewhat undermined by misuse since you don’t tend to walk into the bath wincing as the water level reaches your genitals, but in this case it’s true. The water is the temperature of bathwater that’s been left for a while, lukewarm, but near the shore, where the waves are meeting the hot sand, it often feels like someone has turned on the hot tap. If you swim any distance you can feel yourself starting to sweat. Just floating about in the waves or lying sprawled across a lilo seems the option most people are taking. 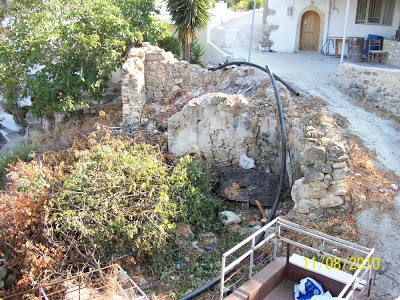 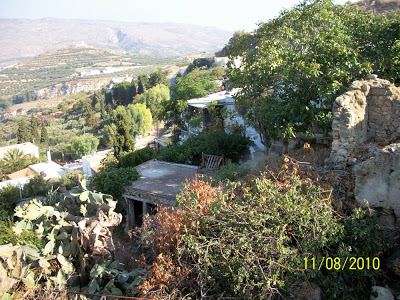 Another result of this heat, perhaps in combination with someone cutting a couple of trees down in the land directly in front of our house (pictures above – note the rubbish, which is something you never see in the tourist brochures), is that we’ve had some visitors. Having done my 2,000 words yesterday, then us having gone to wet ourselves first on the outside then on the inside, we returned here. Whilst then heading to water the garden I noticed something black and curly lying on the garden wall and wondered what it was, a twig, bird crap, maybe a crack I hadn’t noticed before? It turned out to be a little snake. To me this was good to see – just an enjoyable bit of wildlife to observe. Caroline’s reaction to these animals is slightly different, being of the mildly spooked ‘I ought to be scared of this’ kind. I tipped it off the wall into the weeds below. Then, this morning, I noted her opening the patio doors rather cautiously. I thought this was about snakes until I saw the scorpion folded up on the floor. It then unfolded, stretched out to about an inch long and made a dash for our sofa. I got the bugger with a teaspoon. Yeah, I like wildlife, but we tend to prefer to share our house with geckos only.

They have chilli plants here on Crete that are quite beautiful, especially near the end of the year when the chilli colours range from green, yellow, orange, red, white and purple. These are mostly used for decoration rather than gustation. It’s weird that here’s an island with a climate in which it is possible to grow every herb and spice under the sun, yet Greek food is bland. Having previously grown chillies from seeds brought from England I decided last year that I would next grow these colourful Cretan chillies. We first gathered some large chillies from a nearby village called Vori, then a Dutch woman called Honi gave us a branch of small chillies torn from a plant in the garden of the property she was renting. I removed seeds from the ripe chillies on all of these, dried them and stored them away. This year I planted them, and ended up with so many plants I supplied them to five other people and also left a box of them in the Gecko Bar for yet others to help themselves to. Anyway, here’s the result: 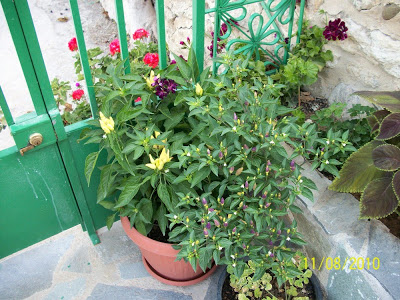 Above I mentioned the Dutch woman, Honi. She used to run the Status Bar in Makrigialos, but last year she left the keys and buggered off, also leaving, allegedly, numerous debts. The bar is now closed. I also mentioned the Gecko Bar. The proprietor has been trying to sell the lease and now it is closed. She closed it in July to take some time off for her ‘tennis elbow’ to heal a little. It is still closed and now her arm is in plaster – probably the result of trying to single-handedly manage a bar that could stay open for upwards of 12 hours i.e. closing time would be when the last drunk staggered out. Both these bars have struggled in the present financial climate simply because they are not owned but rented and, understand this, the rents are all year, tourists aren’t. There’s a big similarity here with the British pub, in that the breweries make their money more from rents than beer sales, steadily turning over publicans foolish to maybe remortgage a house to finance a refit and pay rents that profits are simply not covering. Turning optimists into cynics. Here it’s Greek owners rather than breweries.

On Wednesday, after having polished off 3,000, I felt quite justified in visiting what has become our usual haunt this year, the Revens Bar, first for frappes, then for a swim and later for a miso kilo aspro krasi or a half kilo of white wine. As is usual with me I order stuff in Greek no matter what language the one serving me speaks. On this day Yorgos was leaving the running of the bar to Kostis, whose English isn’t great. As he delivered our usual of a miso kilo I then said to him, ‘Sto melon milou ta synithismena parakalo’ which I thought translated as ‘In the future I say to you the usual please’. He looked at me in puzzlement and in broken English said, ‘You want some melon?’ I said no and tried to explain what I thought I had said with, so Caroline tells me, my face turning increasingly red with embarrassment. He came back five minutes later with a plate of water melon and honeydew melon on ice. So much for being a smart arse. In retrospect I realise it’s something like leh-o or lego for ‘say’ and I probably should have stuck a tha in there for ‘will’ or ‘shall’. I’ll ask Yorgos about that, and ask him to explain to Kostis that I wasn’t demanding a perpetual supply of melon with our wine.

Zero Point is coming along nicely though I have to admit to not achieving my 10,000 words last week. I’ve also learnt from Julie Crisp that the edited typescript of The Departure has been sent, but is still sitting in some DHL store room at this end since the petrol strike. Caroline is keeping her mobile phone on ready for a call from the delivery man, but nothing yet. What else? The temperature here is high. Right now as I write this at 10.30 in the morning it is 30 in the shade and still climbing. Oddly, it has again been hotter up here in the mountains than down in Makrigialos – the sea breeze, even though from the South, makes a big difference. However, down there the sea is still like a bath.

The temperature yesterday down in Makrigialos was 37 in the shade with the sea being whipped up by a constant wind. When I went in I thought it was cold, but that was just the contrast I was feeling because when I did my swim across from Revans Bar to the harbour my body adjusted and it again felt like I was in a bath. This is one of the things I’ve discovered from living in such a hot place; very often it’s not the temperatue on the thermometer that’s important but contrast, whether there is a breeze and humidity. I’ve shivered and wished for a jumper in 26 degrees because we drove down into it from a mountain temperature of 30, I’ve poured sweat in a temperature of 28 yet felt quite fine in a temperature of 32 because it wasn’t so humid and I’ve sat outside to cool off in the breeze even though the thermometer read 27 inside and 28 outside. Then there’s acclimatizing to all this. You certainly know you’re acclimatized when you find yourself, as we did back in May, sitting at a table by the beach wearing jeans and a jumper whilst just a few yards away people are sprawled out in bikinis and swimming trunks. Anyway, the overall temperature for Crete today is predicted to be 40 in the shade, so I think the jeans can stay in a draw for a while yet.

2,000 words done yesterday and Zero Point has now passed the 50,000 mark. I’ll see if I can polish off another 2,000 today before we head down to use the Internet (Tuesdays are Internet day).

Further note: I did.