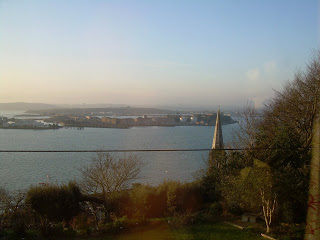 A few weeks back I visited Ireland for the first time. Caroline booked us into a guesthouse/B&B called Amberleigh in Cobh, formerly Queenstown after a visit from Victoria and now pronounced ‘Cove’ i.e. when Southern Ireland gained independence the residents changed the name to Cove but spelled it the Gaelic way so it means nothing in Gaelic and is nothing but confusing to English readers. Very Irish.

We took a Ryanair flight from Stanstead that Caroline had booked and paid for some time previously. For this she recently had to pay an extra £20 flight tax because the Anti-Midas Brown has found this new toy called ‘the environment’ that he can use to screw tax payers for further money to fund his legions of diversity managers, focus groups, spin doctors and general thumb-up-bum bureaucrats. 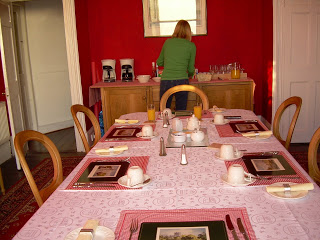 We booked in with hand luggage that then went through scanners along with jackets and belts. Caroline was searched again, but she often is. After this there was another set of scanners for our footwear. As usual, off to one side, there were bins filled with bottles of shampoo, gel, hairspray, deodorant etc. 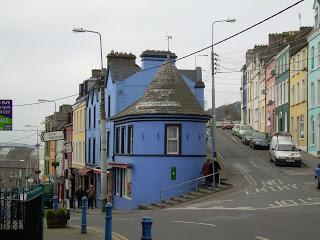 The flight took one hour five minutes and since we had taken only hand luggage we were off the plane and heading out of the airport very quickly – seeing a taxi driver on the way in with a sheet of paper with ASHER written on it. He took us to Cobh in darkness and there were many of those ‘what?’ moments as we tried to adjust our Essex brains to the Irish accent. Only while being driven there did we discover that Cobh sits on a sort of island in the bay – with one road on and off. Finally our driver deposited us at Amberleigh Guesthouse – the place is actually a B&B but such a description seems inadequate.
Michael and Thelma were very welcoming. The guesthouse was a big Victorian building; high ceilings, spacious, furnished like a stately home and our bedroom, with its double bed rather than twin beds, overlooked the harbour – a view impressive at night, with lights reflecting off the water, and even better during the day.
With little time left we shot out for something to eat. It being out-of-season in Cobh there wasn’t a great deal open, and the restaurant M&T recommended was packed. We ended up eating in a Chinese restaurant, and very enjoyable it was. 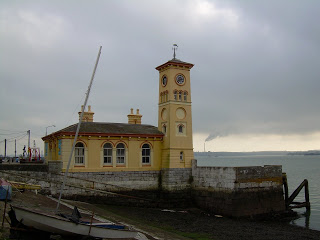 The next day we woke to appreciate the wonderful views from Amberleigh. Downstairs we enjoyed a huge Irish breakfast, in my case: cereal with milk, orange juice, fresh coffee then bacon, eggs, sausage, black and white pudding, fried tomato and fried bread. I could feel my arteries creaking even as I ate. The harbour, which we could also see from the breakfast room was surprisingly huge to me, but as, over the next few days I began to learn something of its history (mostly from Michael), I again realised the truth in that ‘travel broadens the mind’. Michael was involved in saving an island, in the mouth of the harbour, from being again built on and was also striving to have it turned into a world heritage site. Spike Island has a wonderful old prison on it and more history per square inch than you would ever find at Alcatraz. Tourism in Cobh would of course benefit hugely.
After breakfast we took the Titanic Tour. Cobh was the last port of call of that massive ship and 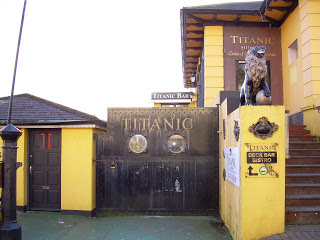 the history of it is scattered all over the town. Just as is history of many other vessels and events: the Lusitania survivors were rescued by people from Cobh and those that didn’t survive are buried there, something like six million Irish went through this port on their way to America … go right back and the Phoenicians were here. History drips from the gutters.
Our second Michael was very knowledgeable – you could tell by the way he answered out-field questions, in my case one concerning refrigeration aboard the Titanic. He was an ex-Navy guy and an avid historian – even having been consulted for the film. At the end of our tour we drank Guinness while Michael II talked a 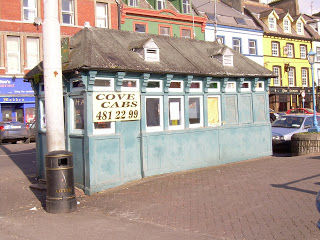 little more about the plaque from the people of Cobh he organized to be placed on the deck of the Titanic. He also showed us what the pressure down that deep does to a polystyrene coffee cup. Those who laid the plaque took one down in an onion bag, being returned to the surface it was lucky it didn’t fall through the bag’s mesh, since the pressure had reduced it to the size of a thimble.
About the Guinness: it is better over there, but I’ve come to the conclusion this has nothing to do with the water – it’s the frequency of use. Order a Guinness in Britain and because it’s not drunk here very often the pint you’ll receive has likely been sitting in the pipes for hours if not days. Order a pint of the same in Ireland and quite often you have to wait your turn. It comes out black as sin with a texture to the head like double cream on a floater coffee. Nectar.
We spent a few days in Cobh (it was for my birthday), then regretfully headed for home and chaos. Caroline was searched again and a tin of hairspray was confiscated from her bag – one the customs women missed on the way out.