Skip to content
Wednesday 18th
To start us off , here’s a picture of Yorgos, the boss of the Revans Bar, hard at work. He was trying to catch forty winks on a sunbed but, being unable to get comfortable in the heat, decided to cool off. All perfectly understandable when last night he closed the bar at one and the night before at four. 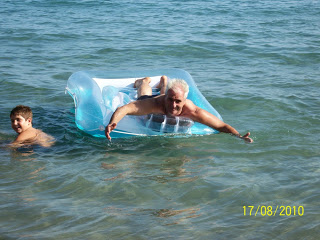 Time for a little rant:
You’ve sold your house in England and gone through all the grief of buying yourself a house on the island of Crete, either in the seaside resort of Makrigialos or up in a mountain village nearby. One would have thought that you would be satisfied, that you’d achieved some sort of goal you’d fixed upon as retirement drew close, but no, here are just a few I’ve heard:
You don’t like the heat, you don’t like olives, you don’t like sunning yourself and you’ll only get into the sea when fishes get out to go to the toilet. There’s no Tescos or Asdas here and it’s difficult to buy your Homepride cook-in sauces. There’s no Chinese or Indian restaurants, and cod, chips and mushy peas are a forgotten dream. You can’t get British TV. You pine for green fields, and for snow at Christmas. You miss your relatives, though after just a few days you want to kill them when they visit. You want to go home where everthing is easy and familiar, wrap yourself in a duvette, eat oven chips and watch Eastenders every day.

Y’know, there are ex-pats here in extreme need of a slap. How well now I understand that Australian appellation for the British: whingeing poms. Many of them are living in a place tens millions of other British would kill to get to, yet all they seem to do is moan.

And when they’re not moaning about Crete they’re bitching about each other. They tend to form up into cliques and chunter on about ‘them in that other clique’. When we first came here we associated with a couple who, so they said, didn’t like the cliquishness of Makrigialos, then got huffy when we didn’t want to go off drinking with them in various mountain villages. We realised then that they were pissed off because we weren’t joining their particular clique. Others here have had rows and fights (hot sun and alcohol, go figure) with the result that so-and-so is no longer talking to so-and-so. Leaving this place for five months every year we tend to to see all this from a perspective that’s lacking in the full-time residents here. It is all rather pathetic to see adults behaving like they haven’t yet found their way out of the playground.

Oh damn, I was bitching and moaning.

Perhaps I’m starting to get blasé about these things because I’ve failed to mention until now that The Technician is sitting at the top of the ‘New & Future Releases (science fiction)’ list on Amazon, and has been doing so for three weeks. This happened last year with Orbus, and that book also got to number one in the ‘Bestseller (science fiction)’ list. However, I do wonder if that’ll happen to The Technician since I see that Banks fella has an SF book out, the bugger.

Yesterday we again met a couple who have just returned from Norway to spend a a few months in their house here. Tor and Tova are definitely not a couple of moaners like those I mentioned before – they too get some perspective by leaving this place for a little while. We had a drink with them by the beach, then proceeded to a meal at the Cabbiano where the Greek waiters felt inspired to do one of their dances. Here’s a picture of Niko in mid-leap and Stelios behind him. We bought our house from the latter of these but our problems with it doesn’t keep us from his restaurant, which is always pleasant. 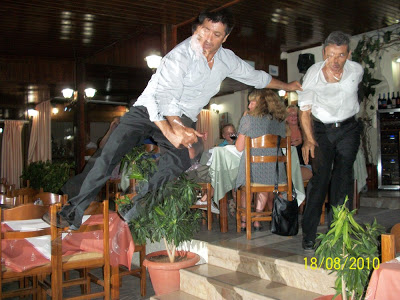 I’ve been quite remiss this morning, sitting and reading the last few hundred pages of the last book of a trilogy I was particularly enjoying, rather than knuckling down and getting on with some work. But before I tell you about that trilogy, I’ll rewind back through my reading list. After finishing the Karin Slaughter books Skin Privilege, Fractured and Genesis, and enjoying them quite a lot, I felt it was time for me to read something a bit less bloody and traumatic, so I picked up a book Caroline’s parents had brought with them when they came. 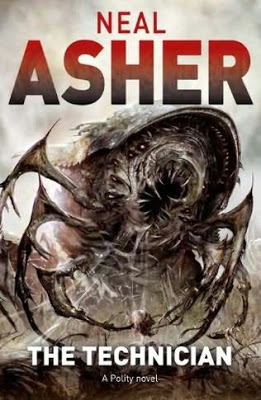 Unseen Academicals is the latest Terry Pratchett out in paperback. This was one presumably written with Mr Pratchett’s voice recognition software, now his Alzheimer’s has killed his ability to type, but it was still a thoroughly enjoyable romp. I felt it wasn’t quite as good as a lot of his other books, but it still stands a head and shoulders over the majority of what makes it onto the bookshop shelves and I’ll certainly reread it. 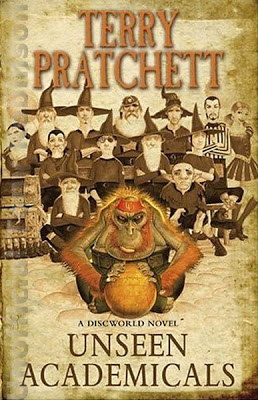 After Pratchett I obviously felt the need for some more murder and mayhem – a need quite adequately catered for my Bait – Nick Brownlee (just read the first paragraph of this book and you’ll see what I mean), and then Evil at Heart – Chelsea Cain. The latter book turns out to be the third in a series, the first two of which I haven’t read. I do wonder if my enjoyment of it might have been spoilt if I actually had read them. Reading references to what has happened in the previous two books I do wonder if this one is a bit of franchise extending. 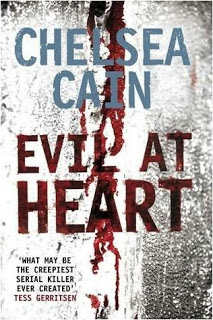 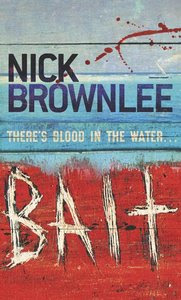 After these I read The Disappeared by M R Hall. I did like the book prior to this, The Coroner, though the heroine was definitely one that started to irritate. Here we had a fascinating story to follow, which I enjoyed, and a heroine who had moved from the irritating category to thoroughly annoying. 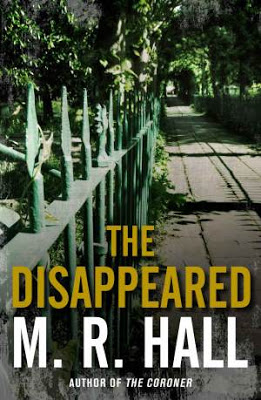 It’s funny, but there’s a thread that connects the trilogy I’ve just read, right back through everything else I’ve read to the Karin Slaughter books: the damaged hero or heroine. It’s starting to get annoying. Do these people always have to be: in the midst of a divorce, recovering from abuse either recently or in childhood, have some sort of problem like alcoholism, drug abuse, depression or in one case dyslexia? Y’know something, a modern police procedural or thriller would be unique if the central protagonist had a happy and relatively uneventful childhood, a happy marriage, good health and complete lack of psychological problems. 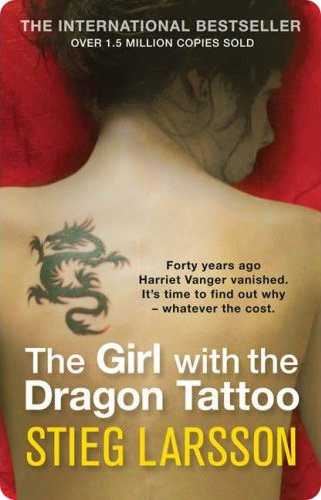 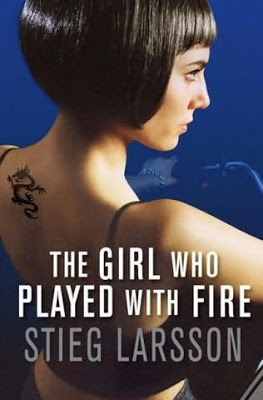 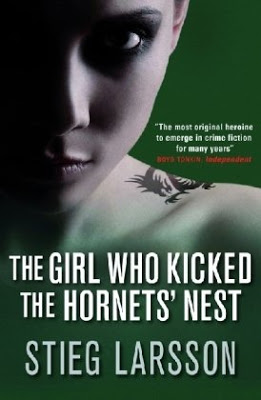 Next I read the Steig Larsson trilogy: The Girl with the Dragon Tattoo, The Girl who Played with Fire & The Girl who Kicked the Hornet’s Nest. Caroline read the first of these before me, as had others I’ve talked to here. All said these were excellent and I would enjoy them. The first third of the first book I found a bit leaden and clunky but by the time I got beyond that I was hooked, mostly by the (damaged) character Salander. There’s not much point in me recommending these books (though there is a point in me saying you must persevere with the first of them) since people only need to take a glance at the bestseller lists over the last year or so. They’re very good. I do however have to comment on one thing that did begin to grate: every bad guy was always a guy, a bigot, always referred to women as ‘whores’ and usually had a penchant for kiddy porn, every woman (except for just one in the first book to whom just a few hundred words were devoted) was strong and on the side of right. Testament to the mind-distorting powers of political correctness.

Oh dear, windy and cool on Sunday – I even put on a T-shirt – and cool again this morning. I do hope this doesn’t mark the end of the hot spell and descent into Autumn…

Whenever I casually chuck into conversation that we have scorpions around and sometimes in our house here, this usually raises a shudder only somewhat ameliorated by me telling the listener that they’re never bigger than an inch long. I then relate how, when we first came here and everything seemed to be going wrong, I heard a thud on my pillow in the night , and how it was almost with a feeling of inevitability that I turned the light on to find a scorpion there. I further add the story about the scorpion I found here, some distance from our house in a pile of olive stumps I was cutting up. This one was nearly three inches long and had a nice big fat sting. I’m a story-teller after all.

Talk then usually turns to creepy-crawlies of very stripe. Snakes get a mention, but we don’t see many here. Then there are the beetles that seem to wear hobnail boots and others that fly at you like seeker bullets, the crickets the size of cigars that land with a sound like someone dropping a bag of spoons, the praying mantises that watch you with odd intelligence, the ants that range in size from flecks of dust to an inch long, the black bees as big as strawberries and the hornets that look like they’re made of coloured plastic. ‘Spiders?’ the listeners will enquire. No, not many – they’re bigger in England. I say this with just an element of doubt because I once heard something drop as I opened window shutters and, by the sound, thought it must be a gecko till I noted, just as it scuttled out of sight, far too many striped legs. I recently commented to a couple about this lack of big spiders here and, bloody hell, I walked outside two days later to find this bugger (below) on our geraniums. It measures about two inches from leg tip to leg tip. I comfort myself with the observation that the shrouded corpses in its web seem to be wasps… 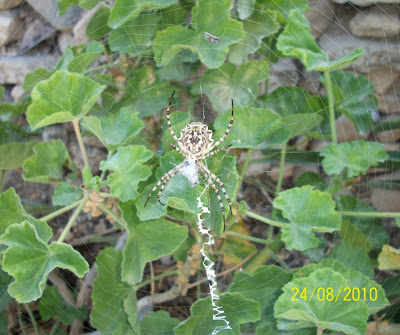