Well, apparently ‘the public’ is ‘shocked and horrified’ by this ‘phone hacking scandal’. Personally I’d like to know where we can find this public (first name Joe?) so as to tell him to stop it so we can get back to some interesting and relevant news stories. Of course the cynics amongst us might note the relish with which Murdock’s competitors are attacking him. The BBC presenters and reporters are positively dribbling at the mouth as they wheel out endless bumf about how horrifying it all is, meanwhile quickly skimming over unimportant stuff like wars, earthquakes, financial collapses, plagues and assassinations (of course the elitist lefty pricks at the BBC have no interest in who ends up in control of BSkyB, ho ho). They even had the temerity to take the hockey mask off a tearful Gordon Brown so he could witter on about how terrible it all was for him. Oh yeah, well I think a few more tears have been shed by the millions of people that Anti-Midas butt-fucked over a decade and a half. Next, after a few other outraged Labour Party MPs, we got the goggle-eyed millipede demanding controls and jail time for anyone who does not love Labour. What a wanker. The Cameroon got a bit of air time too, for balance, but I couldn’t distinguish him from the previous lot.

Still considering things political I see that now Ireland’s credit rating has been cut to junk status, now joining Greece and Portugal (and Italy soon). Meanwhile the Euro MPs demand controls on and sanctions against the credit rating agencies involved. Nothing must stand in the way of the European project, not even reality. Of course the MPs aren’t getting into a panic because of how the financial collapses of countries might affect those who live in them, but because their whole project seems to be falling apart and that could result in a termination of the flow into the Brussels’ trough.

Ack, enough of that. I’m working my way through Zero Point and should be sending it to Macmillan by the time you are reading this. I think you’ll like it but, of course, neither you nor I will know for a year or more.

Thursday 14th July
Ah, I see the Murdock has been forced to drop his attempt to take full control of BSkyB, but now lefties across the world are howling for blood. Like the cowards they are they see a weakness in an enemy and scoot out of the shadows to get the knife in and, of course, this is all a wonderful chance for them to grandstand, make political capital and a distraction from how they are just sacks of wind (Milliband being a prime example). Certainly the Democrats in America are finding this a welcome distraction from 14.3 trillion dollars of debt. Ooh I love the smell of burning witches in the morning…

Friday 15th July
With hints that the phones of 911 victims were hacked, the ‘phone hacking scandal’ grows upon the smell of a compensation feeding-frenzy in America. The Murdock-haters are doing the best they can to keep it running, but I guess Murdock himself, more than anyone else, is aware of how today’s front page news is tomorrow’s chip paper. And, regarding his dumping of News of the World, running a media empire he’s also aware that this decade’s newspaper is the next decade’s profitless website…

Now why am I writing about this? It’s a morning reaction to the news of, ‘Oh not that load of wank again’.

I’ve finished the read-through and addition of chapter starts to Zero Point – rather quicker than I expected – and have now returned to Jupiter War. I’m 66,000 words into that and presently resolving some plot points. I need certain things to happen all over a short period of time and need them to be both plausible and not too chaotic a mixture.

Okay, back to Crete and its environs. A number of years ago I bought some succulents from one of the roadside sellers in Sitia. These produced excellent flowers and I collected the seeds from them to grow them again the following year. I then bought more with different colours, and collected the seeds from them too. This year I’ve grown these succulents from seed in red, yellow, cerise and salmon pink. They’ve come up a lot better this time and there are a few crosses, mutations or reversions in there, because white and orange ones have appeared now too. Maybe I’ve asked this before (and forgotten the answer) but does anyone know the name of these? 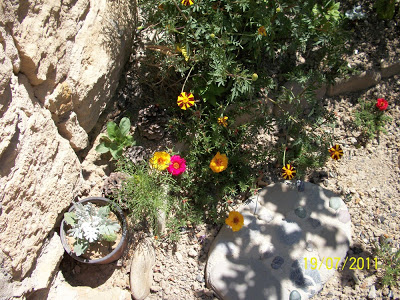 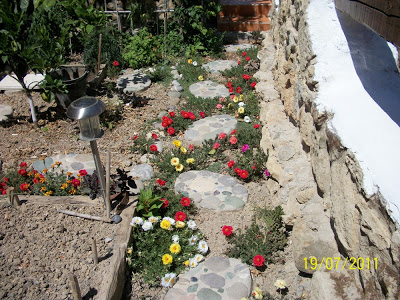 We’ve had guests in the ‘ruin’ over the last week (Caroline’s parents) and they seem to be finding it comfortable enough. Having separate accommodation like this certainly has its advantages: no need to put on pants when going to the toilet in the night, no need to cook a breakfast for four, breathing spaces and periods of needed privacy. And thinking on the last of these I see that the Cretan family, who were the bane of our lives for a couple of years with their inability (or plain refusal to) to understand the concept of privacy, have now attached themselves like leeches to the new Belgian neighbour. Perhaps he’s quite happy with that, I don’t know. We weren’t and it took me, after much agonizing, finally losing my English politeness and starting to shout to get them to back off.

It’s interesting here to see how various expats have dealt with similar problems. I see a lot of compromises around me where people are perpetually invaded by their ‘Cretan friends’ and kid themselves that this is all okay, not a problem and ‘aren’t we integrating well’. Others put up fences and have to ensure that their doors are locked, whilst still others have come out the other side of the home invasions when surrounding Cretans have either accepted their need for privacy or grown bored with the game. As a foreigner you are a source of entertainment, a curiosity, someone to be pontificated to about the correct way to do things and a person whose home can be invaded at will. Of course, if you stroll into a Cretan’s home in the same manner, demand coffee and start picking up items and asking how much they cost, you soon discover that the traffic is all one-way.

Saturday 16th June
This Belgian guy moving in next door has raised all sorts of unpleasant memories of our initial time here. Wandering back from Makrigialos a couple of nights ago we noted the Cretan female neighbour, and one of her small sons, sitting out on their roof. Now what’s the problem there you might wonder, it’s a beautiful little Cretan village with wonderful views. Well, no, they were sitting facing the Belgian’s front garden and courtyard, staring and waiting.

How reminded we were of her sitting in our house, staring, whilst I struggled with my Greek to find some way to explain to her that no, we don’t like her stepping over onto our front terrace and pressing her nose up to the glass doors, then immediately stepping inside, uninvited, when I open them and, really, we’ve got a leaking roof that needs fixing and we’re living in a dump sitting on plastic chairs and I have books to write and would she kindly piss off? And oh, incidentally, could she please stop her kids coming inside when we leave any door open, since this is our house and not their playground and our belongings are not their toys?

I actually wrote more about our first two years here but then decided it best not to publish it on this blog, it being potentially libellous. I’ve dumped it into a file named ‘Cicada Scream’ which will be the title of a book about our time here, if I ever get round to being able to concentrate on it without wincing. Some stories, really, can be too painful to tell.

Monday 18th July
I see that there’s been loads more about the ‘phone hacking scandal’ with resignations, arrests and further lefties (like the Australian Greens, who might have some desalination plants going cheap) leaping onto the bandwagon. Numerous are the cries about media monopolies and more control of the media. Okay, so who is going to ‘control’ the media and decide what monopolies should be broken up, the same people presently conducting this witch hunt? That will mean that the BBC monopoly will continue untouched because it is on-message, whilst you can guarantee that if the newspaper concerned had been the Guardian the whole damned thing would have been played down. Don’t for one moment be fooled into thinking this is all about integrity in the media, it’s about partisan politics.

The temperatures are zooming up here now. This morning at 9.00 it’s 27 in the shade and steadily on the rise. Interestingly, just lately, the addition of those roof windows and them letting in the early and late sunlight has resulted in the inside temperature being fractionally higher than the temperature outside (where the sensor is on the front wall) when, previously, the temperature inside was always two or three degrees lower. Maybe this will result in us having to use the bedroom fan – which we haven’t used – and maybe we’ll end up getting quite hot in August, but the benefits from this in early spring and late autumn will certainly outweigh that.

Oh, and here’s a picture from Revans Bar. Once, last year, I glanced over to Kostis behind the bar then, just half a second later found him standing by our table serving our drinks. I was certain I hadn’t drunk enough to start experiencing blackouts then, after a little confusion, and a ‘hang on what the fuck is going on here’ moment, it all came clear. Kostis is the one on the right and is older than his brother Lefteris by maybe five or ten minutes. 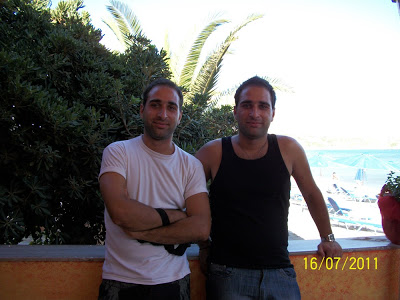 Tuesday 19th July
Oh dear, more resignations and now a death. Now if Murdock had had someone bumped off because of all this then that would be an interesting story. But it seems unlikely and really the whole farrago is just uninteresting and irritating now. Harriet Harman was this morning relishing this as a way of attacking Cameron because he hired one of those involved. Really, those at the top of Labour over their decade and a half reign should really be hiding in shame, or they should be in prison. Oh hell, Millipede and the Anti-Midas Brown again, and more about how ‘the nation has been shocked and horrified’. I feel sure that the wankers at the BBC are as disconnected from ‘the nation’ as the politicians. Only the professionally offended are shocked and horrified by this circus, the rest of us have lives to live.

Advice to foreign home buyers everywhere: make sure your house is too small to accommodate visiting relatives. Remember that people you can tolerate for one evening become potential murder victims over two weeks.

Well, the last ever US shuttle mission is drawing to an end. I wonder how long it’ll be before the space station is abandoned whilst politicians on Earth concentrate on such critical occupations like bombing Arabs, wasting money on windmills, buying off large numbers of those who vote for them by employing them in pointless bureaucracies, taxing businesses to extinction whilst pocketing huge salaries and expense claims and growing increasingly disconnected from reality by their perception of how important they are.