After spending this morning checking through The Other Gun I’m now printing it off for Caroline to check and for me to check too, since often I’ll pick stuff up on hard copy I miss on the screen. It’s a fun story I think and I hope Sheila Williams of Asimov’s, who has agreed to take a look at it, enjoys it. I do wonder, however, if it might be too Polity slanted – there’s a lot of stuff in there perfectly understandable to those who have read my books, but it might be a bit confusing to those who haven’t. Whatever, I’ll send it along.

Next it’s back to Penny Royal II, which has now passed 9,000 words. I’m beginning to divide this up into chapters and have started a contents file, which thus far looks like this:

I’m not giving a lot away here since no-one but me has seen the book prior to this. For those of you who know my books there is, however, quite enough to tease you.

Thursday 26th July
Pickled onion time! At the end of March after we arrived here I paid a few Euros for a large bunch of seed onions, which I planted between rows of other vegetables in our front garden and in a large patch in the back garden. Once these got going they provided us with plenty of spring onions until recently when they started to go over. I ate a lot of them, which is why Caroline has taken to calling me ‘Mr Onions’. Now I’ve picked the remainder and have turned them into pickled onions. Next it will be the chilli sauce – I’m picking the first handfuls of chillies now. 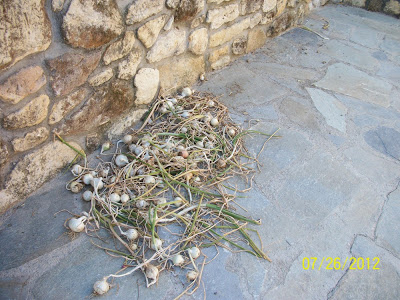 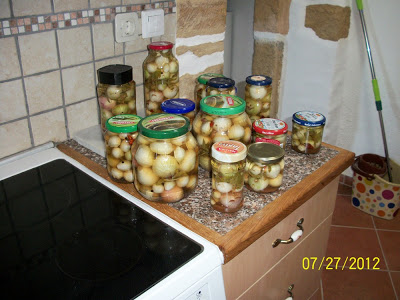 Other things are doing well. Below you see the peaches on the tree I planted last year. I was earlier disappointed when the flowers fell off the pomegranate tree I also planted, however, it has now produced more and I’m hopeful we’ll be getting some fruit there too. 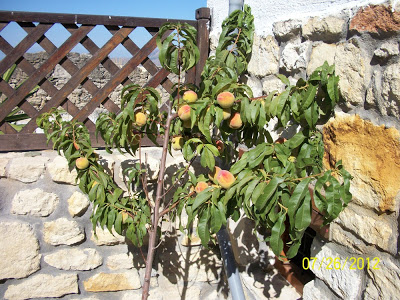 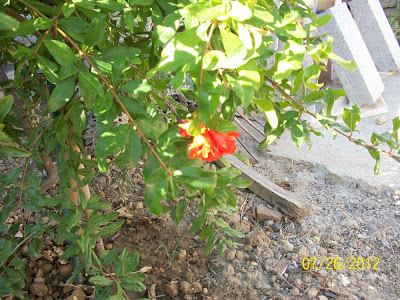 Friday 27th July
I see that Mitt Romney supposedly made a gaff criticising the Olympic Games. Then I saw that part of the interview concerned where he was asked about London’s readiness for them. He replied honestly about legitimate security concerns with G4S (let’s just remember who are most likely to be terrorist targets there), and concerns about immigration officers threatening to go on strike. Essentially, unlike other politicians I could mention, he didn’t slime his way out of it with some saccharin and placatory lies. Of course the mostly Democrat-supporting media of America jumped on this and blew it out of proportion, as did the Obama-worshipping BBC.

Here’s some pictures for Dean and Samantha. There might not be a beach when you arrive: 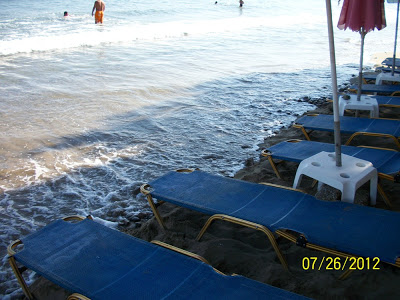 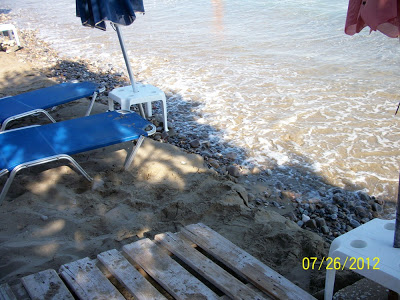 Saturday 28th July
Caroline wanted to watch the Olympics opening ceremony so stayed up until 11.00 (here) faithfully watching BBC World. I mean, it’s the British Broadcasting Corporation and this is a major British event. It’s also a world event so surely that’s a slam dunk in BBC World territory? There was a build-up in a studio which, as they repeatedly told us, was ‘actually overlooking’ it all. And what did we get? Some camera shots of crowds, an interview outside with a visiting Pakistani family, then just talk in the studio. They never actually showed the opening ceremony and Caroline had to go to Greek TV where it was shown in all its glory, and is still being shown today. I guess kids singing ‘England’s green and pleasant land’, Kenneth Branagh dressed in top hat and tails quoting Shakespeare and then the ensuing Danny Boyle celebration of the British past just wasn’t sufficiently ridden with liberal guilt, and inclusive, multicultural and diverse enough for the tossers at BBC World. Really, the BBC is a dinosaur sorely in need of Bradbury’s ‘Sound of Thunder’.

Monday 30th July
Damn, the Meltemi arrived on Saturday and is still here this morning (despite the weather forecast saying otherwise). This is a blasting North wind that wakes us up in the middle of the night and in the early hours of the morning because really it’s just too hot here to close the windows. It sounds malevolent and tetchy as it probes around the house, then chucks garden furniture about, and anything else loose outside, slams shutters about if they come loose, irritatingly keeps flipping our letter box and rips apart and blast-dries plants. I really wish it would go away now.

Because of this wind and because of the weekend Greek occupation of the beach down in Makrigialos we stayed inside our house for the last two days. I took the opportunity to read some more stuff on my Kindle, finishing ‘The Second Science Fiction Megapack’ (ed. Robert Silverberg) and moving onto a third (ed. Philip K Dick). There are plenty of enjoyable stories in these and plenty to laugh at too. I had a particular chuckle at one called ‘Revolution’ by Mack Reynolds – a story about a spy being sent to foment rebellion in the USSR because the communist regime with its ‘seven year plan’ had exceeded American production, everyone there was living a better life than in the US and because so many countries were following the USSR’s lead that communism was about to take over the world. I’ve still yet to make up my mind whether this was a story resulting from Cold War paranoia or wishful thinking on the part of one of the usual leftbots that have occupied the science fiction world from year dot.

Noticeable too is the New wave obsession with ‘soft sciences’ often fundamentally connected to parapsychology etc. Apparently the psychologists, psychiatrists, sociologists and so forth were going to save the world, they were going to reorder society and recreate mankind! Stepping back it can be seen that these ‘sciences’ simply occupy the same position in the SF world that nanotechnology (and of course the singularity) occupies now – the source of miracles and supermen, the panacea for humankind. Meanwhile, in the realm of hard technology, many of these writers were borrowing heavily from each other, with needle guns, gas guns and blasters abounding. One story I began reading, which fell firmly in the former camp, I found myself really enjoying, and so flipped back to find the name of the author. It was Poul Anderson and the story was called ‘The Sensitive Man’. Damn but I wish writers like him had been taken up in Hollywood land rather than P K Dick – some of whose stories I’ve read here and just found a bit silly. Others of note: ‘The Thing in the Attic’ James Blish, ‘The Planet Savers’ Marion Zimmer Bradley.

Tuesday 31st July
The Meltemi is still here, still chucking things about and still tetchy, though it does seem to be running out of steam … then again it did stop for one evening, as if like in a hurricane the eye had suddenly come over us, but then started blasting again that night. Whatever, we’re going down to Makrigialos for the Internet and I am damned well going for a swim even if I do get exfoliated on the way into the sea.