The new taverna at the bottom of the village is a handy addition for us here. I’ve learned that it’s called ‘To Avli’ which translates as ‘The Yard’. We like chilled white wine in this climate while the old kafenion down there was limited to beer, coffee, raki and soft drinks, not so the Avli. We don’t have internet in our house here because, until recently, every option seemed to work out at about €50 a month. Our only internet connection was a 20 minute drive away, but not any more: it is now available just a couple of minutes stroll away. It’s free for customers, but purchasing a €2.50 carafe of wine, with free mezes, is no hardship. Civilization is now reaching Papagianades, which comes as a surprise since Greece as a whole is still falling apart, tourism is down, unemployment is 27% and money is tight. 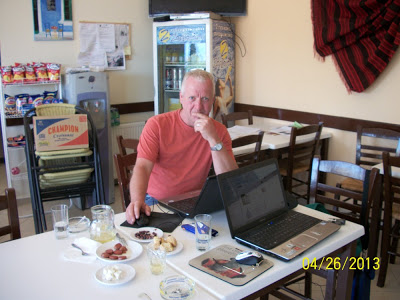 Back to work today, which seems a shame what with the temperature having climbed about 10 degrees in the last week. When I say work I of course mean writing. I was going to start yesterday but I had one more thing to sort out for the house. Our way of stopping insects getting in through the terrace doors has been a bead curtain. After last Autumn, which I shall call the Autumn of the Wasp, I decided we needed something a bit better. The problem, however, was a combination of doors and shutters which, due to the thickness of the walls, only have 90 degrees of movement, while the gap between them in just an inch or so, which leaves little room to manoeuvre. So I spent yesterday constructing a fly screen hinged at one side and in the middle, secured with magnetic catches, and with chunks carved out to stop it snagging on various items. They work, but warped wood and some slightly haphazard sawing means they are still, ahem, under development.

Damn, not a very good day yesterday at all. It was over 20C in the house and higher outside yesterday but I felt cold and quite rough. Too much wine, too many cigarettes? No, in retrospect I realise I wasn’t treating the sunshine here with the respect it is due. Having spent most of Monday in direct sunlight with little in the way of protection my head was roasted. I believe I was suffering from sun stroke. Daft really, since we always warn visitors here of that and chortle at the lobster tourists on the beach.

After further work on the fly screen it is now past the development stage and working properly i.e. I don’t have to bugger about it every time we want to open and close it. Now I just need to tidy the thing up: fill in various screw holes where I moved hinges and catches, paint the thing, cover the rough edges where I cut the netting … but I have to say I prefer this kind of work to mixing up cement to fill holes in the outside walls.

You gotta laugh at the white man’s guilt at the BBC. A clothing factory collapses in India and what do they concentrate on? Do they examine the rampant corruption in India, the politicians planners and local officials taking back-handers, the builders who increase their margin by putting just a bit less cement and reinforcing steel in their concrete, or the inspectors looking the other way either because they’ve been paid too or because they’re too lazy to get off their arses and step out of their air-conditioned offices? Do they buggery. No, in BBC land this cannot be the fault of anyone with dusky skin. It’s our fault for buying cheap clothing. What do they honestly think would happen if the price went up? Would the extra money in any way reduce the corruption and inefficiency? No, the people involved would just end up pocketing more.

In a partial answer to this a sour faced harridan said that the EU must place restrictions on such trade until such places get their act together. Oh yeah, that’ll work. The EU already has trade restrictions on other countries. Many African farmers, for example, cannot sell their goods to the EU. The result of this is less wealth heading that direction, and poverty. But that’s okay, because then we feed them money via the likes of the DFID making them dependent on charity. They can look admiringly at their fucking windmills while they starve. Gotta keep them in their place. Strange how those who are so active against racism cannot see how implicit it is in their attitude.