I’ve been reading much more lately. I read Terry Pratchett’s Snuff and it was a book I didn’t want to end; I read one about the campaign Alexander the Great in Afghanistan that started out seeming crudely simple but then grabbed me and had some interesting parallel’s with the present day; and I’ve read some other books I’ve enjoyed immensely. However, for every book I’ve read and enjoyed there’s been one I’ve made an attempt on – reading maybe a hundred pages – then finally put aside.

Was it that the characters were unbelievable, the history inaccurate, that I couldn’t picture the scenes in my mind, that the plot was daft or too obvious? No to all of these. Every time it was because despite my efforts it failed to engage – it was boring. This is why I sometimes struggle to fill out a review of something that did engage to the end. Really I should just say I enjoyed said book and will buy (or otherwise obtain) further books from that writer. All the rest is pointless decoration.

Thursday 27th September
It’s nice to see that finally, grudgingly, governments are beginning to admit to the real economic problems their countries face. A year ago it was all about the greedy banks causing the crash, which in essence is true in the same sense as pneumonia being the infection that brings a cancer patient to the edge of death. The real problem, the cancer, is governments overspending, bloated state sectors and far far too many people used to sucking on the state teat whether through welfare, the NHS or its equivalents or by being employed in the ever expanding public sector. Of course now those same governments face a dilemma. They know that they have to cut their spending but the voters they’ve bribed are objecting to this. Instead they fiddle around the edges, try to squeeze more money out of the people who actually generate wealth rather than waste it, increase business-killing taxes and talk blithely about financial stimulus. Politicians only spend on the promulgation of their particular ideology, hence the fucking windmills spreading across Britain, or on feathering their own nests. Their spending always fails to generate more wealth, and every time they do something ‘new’ they just create another stratum of bureaucracy to drain their country of wealth.

Friday 28th September
What I want to know is when is someone going to invent a device that records smells in the same way as a camera? I am of course aware of just how complicated such a task would be and I’m guessing that someone is already working on such a project now. When this machine is available I want one and with it I’ll take my first smellograph of this plant: 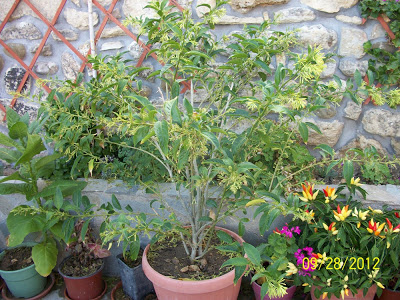 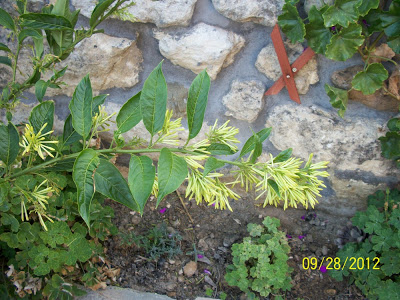 The name I’ve been given for it here is night flower. It doesn’t look like much but when it’s flowering on a hot evening (I guess it’s pollinated by moths) its jasmine-like smell is intensely powerful. We can smell its perfume even when we get out our car, which I park over a hundred feet from our house.

Monday 1st October
Last week was a good one with 844 words written on blog posts and 10279 written of Penny Royal II taking it over 80,000 words. As noted before I started this book on July 19th, so that was 52 working days. It should have been, at my supposed rate of 2,000 words a day, 104,000 words but it works out at 1538 words per working day. This means that somehow I lost about two working weeks. Some of this was because of shopping and a portion was because I did some work on the house but, if I’m totally honest, the rest was probably lost to hangovers. This is why, 10 days ago, I knocked the booze on the head and, as is usual during my temperance phases, I’ve missed it not at all.

Tuesday 2nd October
So a few days ago Kostis told Caroline about a fan of mine being here and wanting something signed. I enquired about this later noting that the book I’d left in the Revan’s book shelf was missing. I learned from Yorgos that it was the friend of a fan of mine who, ‘thinks you’re God’. What with the language barrier and one thing or another all I truly gleaned was that there was a couple here of who the girl had a friend who was a fan. Whatever – just so long as she wasn’t carrying around a sledgehammer I didn’t mind.

The two apparently turned up yesterday at four, then seeing we were on the beach left us in peace. Later, when we were up at a table, a woman called Pauline, who has been a long time resident here, wandered across. The two were friends of hers and she went back to tell them we were now off the beach. I immediately ordered a carafe of wine to settle my nerves. The couple turned up. They were from London – a bubbly hairdresser and a guy called who works in the legal profession. They weren’t fans but they were tickled by the idea of meeting the author who their friend rates (Hi Gavin). I duly provided bookmarks, signed that book from the shelf for Gavin and had my photograph taken with them.

I wish I hadn’t had the wine. I enjoyed just one glass of it and subsequently woke up in the night with a stinking headache.