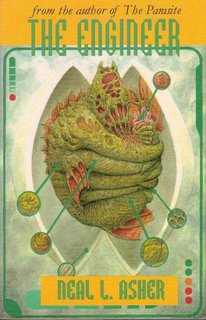 ‘This is an astonishing collection of stories’ – Genre.

The Engineer (a novella) and the short stories Snairls, Spatterjay, Jable sharks, The Thrake, Proctors, and The Owner.
Mysterious aliens … ruthless terrorists … androids with attitude …genetic manipulation … punch-ups with lasers … giant spaceships … what more do you want?

And here is the version from Cosmos books with some extra stories and introductory blurbs from me. I called this The Engineer Reconditioned because well … you recondition an engine. 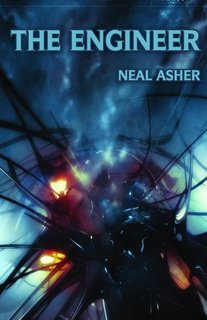 Apparently it’s being distributed by a company called Diamond and is now selling pretty well. If you’ve got a copy of the one above I recommend you go out and buy a copy of the new edition. It’s received further editing, has those extra stories and blurbs, but that’s not the reason why. You need to wrap the old version in plastic and lock it away in a safe, since I’ve seen copies on eBay up for $125.

Then again, I’m not entirely sure they sell for that since it’s a ‘buy now’ price. But buy the new one anyway!

4 thoughts on “The Engineer Books”