I cracked open the cellophane of a DVD last night and inside found a postcard I could use to enter a competition to win a further 10 DVDs. However, the closing date of the competition was December 2008, so I reckon it must have been sitting on our shelf for maybe two years. It was one of a number I bought a while ago on recommendation and because they seemed to conform to my taste. It was Pan’s Labyrinth from Guillermo Del Toro, the director of Hellboy and Blade II and, incidentally, one of those lined up as a director of a section of that Heavy Metal thing I was involved in. Despite being in Spanish with English subtitles the film was absolutely superb and I would recommend it to anyone. As Caroline said, it would have been a bloody good film even without the fantasy elements. But having watched it I do wonder about Del Toro stepping into the Hollywood machine. 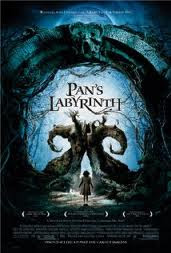 The response of some would be that he ‘sold out’ but I perfectly understand how such a move would have been the right thing to do for career opportunities and his bank account. That being said I can also see that if Pan’s Labyrinth had been made in Hollywood the likelihood of us getting a glimpse at Franco’s Spain would have been remote. Almost certainly many of the characters would have been Americans, the setting would have been one Americans could get some handle on, there would have been more explosions and CGI special effects, and it wouldn’t have been anywhere near as good.

I see ‘the critics are saying’ that the Booker Prize is being dumbed-down what with, perish the thought, books being judged on their ‘readability’. My goodness, they’ll be judging them next on something as base and plebeian as popularity. The six books contending for the prize were shown and, of course, Caroline and I recognized neither the books nor the authors. Now, I’ve ranted about this sort of thing before, but it always bears repeating. There was this guy who wrote plays and, to ensure they were popular with the plebs and that the tickets sold, he filled them with kings and queens, ghosts, incest, love, betrayals and of course plenty of murder and mayhem. Then there’s another writer who started off writing stories for magazines and newspapers before moving on to produce numerous ‘readable’ books that gained world-wide ‘popularity’ (how dreadful). The first of these was an ‘upstart crow’ full of ‘bombast’ and ‘conceit’ according to one critic, while the second was sneered at by his contemporaries. They were respectively William Shakespeare and Charles Dickens. I just have to wonder how many of the books and authors being critically praised in the rarefied field of contemporary ‘literature’ will stand such a test of time. My guess is that they won’t, and that writers like Terry Pratchett and Stephen King will be retrospectively praised by future critics long after Booker prize-winners and the pompous literary critics of our time have turned to dust.

Thursday 20th October
There were riots in Athens yesterday, on the second day of a general strike, and there will probably be more today. I had to allow myself a cynical chuckle about one piece of ‘austerity’ legislation they’re objecting to. Apparently it will now be possible for civil servants to be fired. Ah, the poor little darlings. Now they’ll have to live in the real world like those in the private sector they’ve been parasites on for so long. Now, when they’re lazy, unproductive, corrupt and generally just a waste of space, they can be shown the door. Welcome to the real world!

I’m off to the orthondiyatros (dentist) today to have my teeth cleaned. The guy is a private dentist originally from Iran, and his wife the hygienist. I consider the cost well worth it since in Britain under the NHS a clean of the teeth consists of about five minutes of scraping, followed by some paste and a polishing wheel, then out the door and ‘Next!’ The clean I get here takes over an hour with every tooth individually cleaned. It is the case that only when you start looking at private dental (and medical) care that you realize just how bad the NHS is.

But I wonder if private or public medical care will make any difference for the son of Yorgos (this particular Yorgos is one of the brothers at the Gabbiano, and runs the kitchen there). We wandered in there for a meal a few nights back and noted how down in the mouth they all seemed, and shortly afterwards we found out why. Yorgos’s son, who is 17, had come off his motorbike and broken his back. A vertebra was shattered and pieces of bone shoved into his spinal cord and, because he was thought to be drunk, some people tried to help him up. In the hospital they’re to operate and, as far as I can understand with my limited Greek, rebuild the vertebra with artificial bone. Last I heard the doctors were preparing to tell him that the lack of feeling in his legs has nothing to do with the drugs he’s on and that, at best, he’ll not be walking for a year. At the worst he’ll be in a wheelchair for the rest of his life, and Crete is certainly not a great place for one of them.

I see that Gaddafi was found, just like Saddam Hussein, in a hole in the ground. Since he was found by Libyan fighters he didn’t last for very long after that. Of course I already hear some twats crying that he should have been captured alive, questioned and tried, and all his crimes closely examined. Oh, and right now they’re whiffling on about how he had surrendered before he was shot. Bollocks. He was responsible for thousands of deaths, including all those people taken out by the Semtex he supplied to the IRA. Good riddance.

Friday 21st October
After much partying over the night many Libyans are waking up this morning with joy in their hearts and enthusiasm to rebuild their society, and hand in hand they’ll venture into a brave new future. Then, as the party atmosphere dies, and as they start clearing up the mess, and as they start turning and threading the nuts-and-bolts of their society, they’ll begin discovering that the guys they were fighting alongside have altogether different enthusiasms and a completely different idea of what constitutes a ‘brave new future’. While some Libyans will be looking forward to voting in a democracy, others will be thumping their heads against prayer mats and dreaming of caliphate, of Sharia law and insuring western influence is forced out, and they, and others, will be gathering up guns and explosives and harbouring tribal thoughts of vengeance. Expect the bickering to start if not now then in a few weeks, then wait for the killing to ensue. If I’m wrong about this I’ll be very happy; if I’m right I’ll be utterly unsurprised.

Ah, it’s like coming home hearing the sound of electric chisels, the thump of hammers and the chug of diesel engines. Mikalis, who rebuilt our ‘ruin’, has now set to work next door. First on the agenda is digging out a trench three and a half metres deep around the neighbour’s back walls ready to seal them with a membrane and concrete. Little side jobs include chiselling out cracks and sealing them, lifting broken and badly-laid tiles and making repairs. Future jobs will, I suspect, include joining roof plates with steel and concrete, tearing up all the tiles to put down a layer of sealant, and putting down new tiles with the correct slopes on for drainage since two corners of the roof collect pools of water at least an inch deep. With any luck Jean-Pierre won’t have water running out of electric sockets and buckets spread throughout his house to collect water the next time it rains.

Saturday 22nd October
Apparently the UN wants a ‘full investigation’ into how Gaddafi died. Why? Why do they want to piss money up the wall finding out? Oh yeah, got to ensure their liberal credentials. Like numerous similar tossers appearing on the TV lately they have to frown and beat their breasts over such uncivilized behaviour. They have to demonstrate their moral superiority over other more primitive peoples. Of course these liberal pricks fail to realize that their patronizing attitude is tantamount to the racism they supposedly abhor. And don’t these same pricks also believe in equality? Then why aren’t they demanding investigations into all the other deaths in Libya? By demanding an investigation into Gaddafi’s death they are showing how they feel his life was more important than other lives. But of course they are all political animals so probably don’t like seeing summary justice dispensed to their kind, since it might be dispensed to them next.

So, the world population is going to be reaching 7 billion this month. When I was born in 1961 it had just passed 3 billion and in the mid 70s passed 4 billion and by 1990 passed 5 billion. The rate of growth now, apparently, is about 80 million per year – more than the population of Britain each year. This is why a major tsunami kills 300,000, floods in India or Thailand kill hundreds and make thousands homeless (probably because so many of them are now living on flood plains and so much land that would have soaked up the water is networked with drainage ditches or under concrete and tarmac) and why earthquakes, hurricanes and tornadoes now have larger body-counts. This is why so many natural disasters are such disasters. So the next time some ‘environmentally conscious’ twonk connects such events to the usual shibboleth or berates you for not sorting your trash properly or for driving a big car, ask how many kids he or she has.

Tuesday 25th October
When Mikalis and crew did the roof on our ‘ruin’ they first piled sand and cement on the roof of the house next door, then brought up a concrete mixer, then mixed the concrete, whereupon a team of six guys hauled it by bucket to the new roof. That’s the thing about building work in these villages: the work itself is difficult enough but getting materials and machines where needed can sometimes be even more difficult. I therefore wondered how Mikalis intended to go about concreting the back wall of the neighbour’s house. Now I know: he is pumping the wet mix through a pipe: 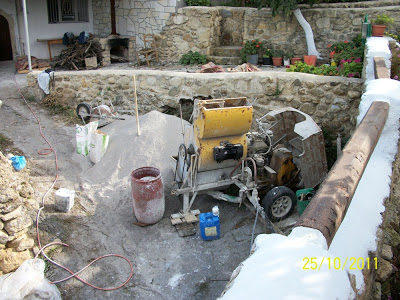 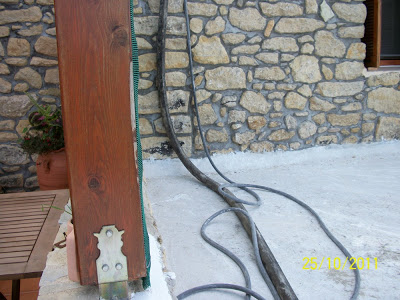 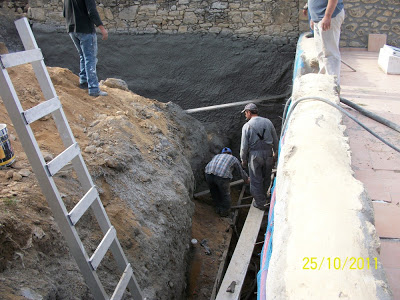 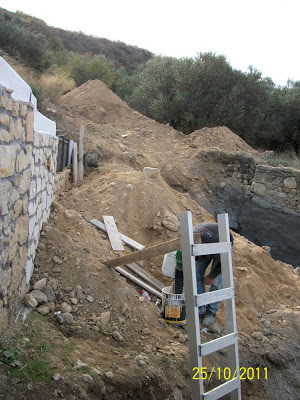 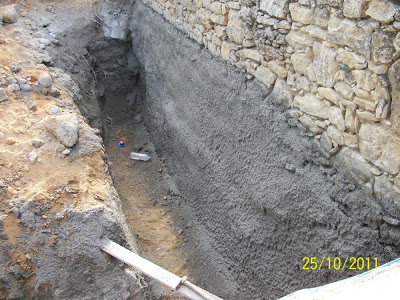 Oh, and here’s one of the builders in flight for the delectation of all those safety officers out there: 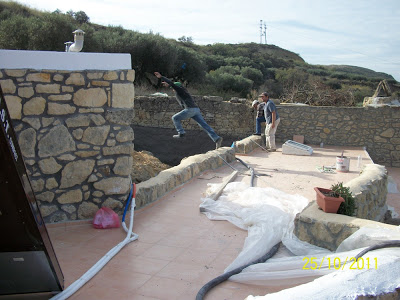