Skip to content
As those of you on Twitter and Facebook may know Caroline has some medical problems which have forced our return to England. I may write about that at some point in the future. Here below are the the posts I wrote in Crete before and as things got a bit hectic/traumatic.
Monday 1st July
As is often the case with me I woke up at 4.30 this morning, dozed until 5.30, thrashed about a bit, then got up at 6.00. This gave me the opportunity to do some watering, update my journal and have a little eke about in the garden. The light here is excellent – often brighter on a cloudy day than a cloudless day in England – but in the mornings it can be something special. I don’t know whether these pictures capture it… 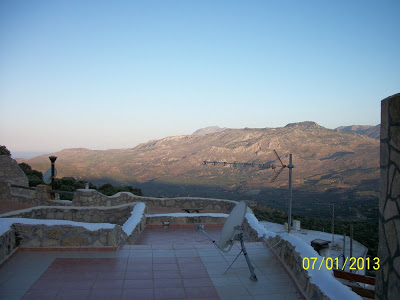 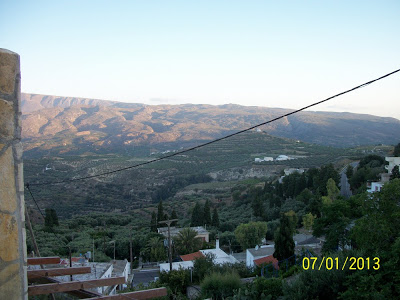 I see that many people are protesting in Egypt against the Muslim Brotherhood. The Brotherhood was voted into power and one could cynically say that perhaps the Egyptians haven’t quite grasped the concept of democracy. However, there are always protests in every country against the government in power – you only have to look at Britain to see that – and Egypt’s problems come down to that trusty old phrase, ‘It’s the economy, stupid.’ They are short of essentials like fuel there and in a steady state of collapse. According to an Egyptian (and Muslim) business man the problem with the Muslim Brotherhood is that they haven’t been working to sort out the economy but instead concentrating on creating an Islamic State. The collapse in one of their biggest revenue earners, tourism, he says, is a prime example. This concentration on Islam is, apparently, slightly off-putting for global tourists. So I guess a previous item on BBC World about a guy starting an Islamic hotel, with men and women segregated and no alcohol allowed, isn’t quite working out then? Let me use another trusty old phrase that has fast become one of my favourites, ‘No shit, Sherlock.’
Wednesday 3rd July
I was somewhat tickled by a Facebook comment on a picture of me sitting down in our kafenion last Saturday: ‘I thought all the hired muscle retired to Marbella.’ I guess I haven’t yet managed to pull of either the effete or wacky writer persona just yet. I haven’t got a big fancy hat, I don’t wear a kaftan or a corduroy jacket, I’m not baffled by practical things because I’m an artiste, I don’t press the back of my hand against my forehead and cry, ‘I’m blocked! My muse has abandoned me!’ I guess this is why when, out here, someone inevitably asks me what I do they often have a startled look when I reply. I just knew they were thinking ‘Essex builder-boy who made some money’. But then, the parody of the writer I’ve just described only applies in some cases.  and the rest look quite normal. 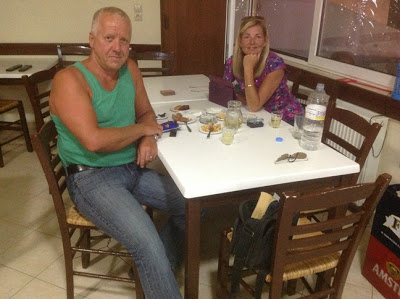 Thursday 4th July
I see that the IPCC, because of high temperatures in Death Valley, have been rolling out their usual line of, ‘It’s been the hottest decade on record’ and of course the BBC leaped on this at once with an extensive report (They have to say something because of those pension investments in green energy). A graph showing this appeared on the screen, too briefly for me to check the scales on it, then we had the line about more people dying because of the heat, which again ignores the fact that many more people are killed by cold and that on balance less people are dying from both. While Shukman was rambling on about this he did, just for balance (ho ho), manage the four words ‘temperature change has stalled’. But this is the most critical part of it all. Holding out their models as evidence they have been telling us that the correlation between C02 rise and temperature rise is plain* yet C02 has continued to rise while global temperatures have flat-lined for 16 years. Their much adapted, biased and pissed-about-with computer models that cannot even predict the past let alone the future, are wrong, and it is these models that their whole argument is based upon. But you know the part of this that always annoys me? I have yet to see any firm evidence that higher global temperatures are a cause for concern, yet there is plenty of historical correlation between higher temperatures and times of plenty. You really have to be a dick to think that higher levels of plant food in the air, milder winters, increased precipitation and hotter summers is somehow going to lead to disaster.
*It isn’t plain, unless you lie about the hot and cold periods in the past, which the ‘climate scientists’ have a history of, and manage to invert the fact that the ice-core correlation is C02 rising about 800 years aftertemperature rises and then, again, somehow forget that correlation is not causation.