Skip to content
So, Elly told us that the wife of a lawyer friend of her husband Nectarius has written a book and wants to publish it in English … or something … so much gets lost in translation when the subject is specialized. The lawyer and wife wanted to talk to me, apparently.

Nectarius and Elly are nice people, generous, and we have enjoyed their company, kazanis and gifts of raki for years. For example, the two kazanis we’ve had here over the last two weekends weren’t for Nectarius’s raki. He attended yesterday’s and at the end of it was mortified not to be able to give us raki because he has run out and won’t be making any until after we’ve left. My response to this approach, therefore, wasn’t my present, ‘I will only read hard copy of published books and comment on them, or not.’ I said I was prepared to look at maybe a couple of chapters and maybe pass them on to someone if they’re of interest, and handed over my contact details.

On Friday we got a phone call from Manolis, the lawyer, assisted in language by a younger lawyer called Yorgos. They invited us for a meal in Sitia. We thought, what the hell it’s something different, and accepted. We were to meet on Saturday in Sitia square by the statue, at 7.00 PM where they would recognize me because they had been checking me out on the Internet. We duly turned up there were a young guy eyed us for a while then approached. Maybe he did not recognize me at first because, as Manolis pointed out later, they had looked at the terrible picture of me on Wikipedia (get it changed, Manolis said, you look like a really old man there). Next Manolis turned up and we trooped over to a harbour front taverna called Gorgios where Maria and her young son Stelios awaited.

While we ate pasta and drank white wine I tried to get a handle on the situation. It turns out that Maria has written three books that have been published in Greece. She handed over a copy of her latest – pictured here – and it’s one I would love to read in English. It’s about Italians occupying Sitia during the war (the town we were in at that moment and one lying only twenty minutes drive from our house). This book apparently sold 5,000 copies, which I’m guessing is pretty good in a country where book reading seems a rarity. The cartoon on the front depicts Mussolini and of course I was reminded of Captain Corelli’s Mandolin by Louis De Bernieres, and I have to add that we also learned of another interesting authorial connection: a close relative of Maria on her father’s side was the butcher on Spinalonga – the island leper colony in Victoria Hislop’s book. 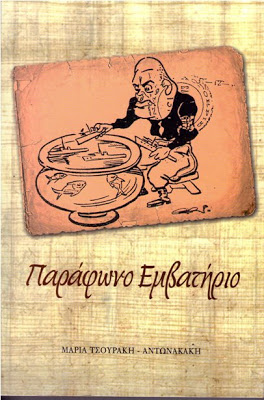 Anyway, the book pictured here, and the two before it, are not the ones with which she wants to break into the English-speaking market. It is her latest, which seems to be a biography about a rather conflicted Greek character. This guy was confused about his sexuality from a very young age which, as you can imagine, went down really well in Orthodox Greece. His life, as far as I can gather, was traumatic. Some incidents illustrate this: a sex-change operation in Morocco with a lack of anaesthesia and during which he had to be tied to a bed, an attempt to rescue two boys, in Muslim North Africa, who had been accused of homosexuality and were to be hanged. This character is now a wealthy female notary in Athens. Seems to me this is the kind of stuff that is ticking all the right boxes for Guardian readers all across Britain.

Now the problems: the book is in Greek so I’ve no real idea how good it is, nor how well it will translate. My advice was for her to write a synopsis, get that and two sample chapters translated into English, whereupon I would try to find out who in Britain might be interested. Publishers and agents please note, if this book is any good you have the added benefit of being able to write-off trips to Eastern Crete against expenses!

Note: the title of the book shown reads in phonetic English as Parafono Embatirio. The first word seems to be dissonant or discordant while the second is a military march (music). I would guess the English title would be Discordant March, Tuneless March or something like Marching out of Step.