I’m not a believer in the supernatural, but it seems almost as if the gods of Crete are smiling on me. First we had that close call on the road followed by the huge coincidence that our garage mechanic turned up in a minute or so and was able to help us. Next I find that trellis at the side of the road and, when I came to fit two pieces of it across the top of the garden wall, fully expecting to have to cut one to fit, I found them fitting exactly – they fitted with spooky precision. But of course, if the gods of Crete had truly been smiling, I wouldn’t have been run off the road by a tourist…

After the last Internet session at Revans, and feeling a bit sizzled from too much sun the day before, I decided to throw caution to the wind and take my first dip in the ocean. It was surprisingly warm and, rather than run screaming back up the beach, I did float around for a bit. Proper swimming next – over to Makrigialos harbour to see if I can lose this writerly gut. 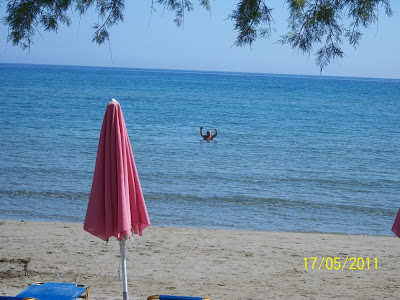 Friday 20th May
Quite often when I light the stove the initial fire is very hot and quick and if I only have the lower vents open it starves of oxygen. What happens then is that it begins oscillating. It uses up the oxygen inside, dies whilst drawing in more, ignites again to use that oxygen. It does this very fast and sounds like an engine running, it can also start blowing smoke so when this happens it’s always a good idea to open the top vents. Here it seems the weather is oscillating in a similar manner, but with a cycle time of about four days.

Yesterday we went down to Sitia in shorts and ended up crouching in a cafe waiting out a monsoon, and drove back up to here on roads turned into rivers. In Papagianades it was cloudy at first, but then the storm arrived (with accompanying thunder and lightning) and it pissed down here too. Today we were going to go swimming, but this morning it’s cloudy, rainy and the temperature is just over 14C.

But on the upside, we got a bathroom cabinet for the ruin, which I put up, ordered a fridge and small cooker which turned up yesterday evening, and also have a bathroom fan I need to put up after I’ve boxed in the pipe. I also fixed wires to the front of the house to take climbing fuchsia, have the outside paint for the upper retaining wall of the back garden and the edge of the ruin roof.

On the writing front I can’t seem to settle into a routine – spurts of writing interspersed with work on the house and garden. I’ve only just passed 35,000 words on Jupiter War and would have preferred to be much further ahead with the end of May approaching. I’d like to pull about a year ahead of my submission schedule at Macmillan (which unfortunately means books finished about two years ahead of when you see them) then turn to some short stories and novellas.

Ah, so much for my pessimism. In the time it has taken me to write this the temperature has climbed to 15.7 and the sun is out. Perhaps I will manage to get a swim in…

Monday 23rd May
Damn it the weather here still isn’t that great. Certainly we’re getting some more sunshine, but still the temperatures are struggling. Caroline spoke to her parents yesterday and where they are, in Essex, it rained for the first time since we left England in March and the temperatures have been in the mid twenties. Here it’s still struggling to get above twenty.

So, rather than sit out on the terrace in the warm evenings we’ve been watching more TV. The latest we’ve watched is ‘Weeds’ about the widow Nancy Botwin (Mary-Louise Parker) at the head of a somewhat dysfunctional family who grow and sell cannabis to make ends meet. After watching all six seasons we both agree that this was excellent stuff and up there with the likes of Dexter. Next on order is Spartacus Blood and Sand – when the price comes down a bit.

Meanwhile, here’s how things are now I’ve spread a bit of white paint about – it looks as if it’s been snowing up there… 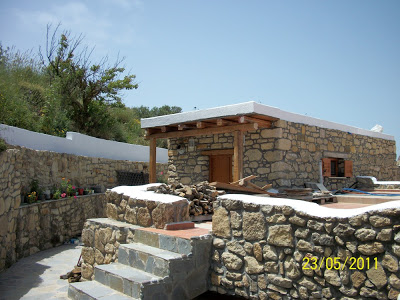 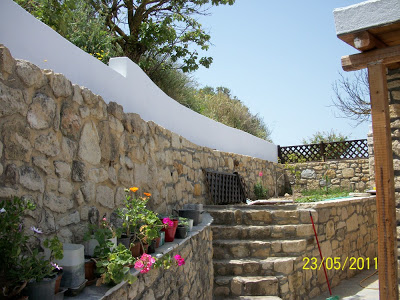 Tuesday 24th May
What a strange and illogical world we live in. Watching BBC World I see that the Taliban is letting off bombs in Pakistan for the killing of Osama Bin Laden. So, Osama managed to live right in the middle of an urban area of Pakistan, near a military base, for six years without detection. He only ended up dead because the Americans went in and snuffed him and this, apparently, is somehow the fault of the Pakistani government?

The next news story to annoy me (with its false certainty and alarmism) was one about the recent tornado in America. Apparently this was the worst tornado they’d seen in six decades. Now what exactly did the reporter mean by ‘worst’? Was this assessment based on wind strength, area covered, amount of devastation caused or number of people killed? I wonder this because six decades ago any measurement of tornado strength or size would not be anywhere near as accurate as now, and six decades ago the world population was half what it is today. If there was more destruction of homes and more people dead, then that is probably because there are more homes and more people in the way. It’s like the Asian tsunami – if it had happened a couple of centuries ago then the disappearance of a few fishing villages might be there to be unearthed in some obscure document. To point at recent natural disasters and the resultant death tolls and destruction and then imply that ‘something is happening’ is to ignore the elephant in the room, which is six billion people.

I need to kill more people. Now, don’t take that the wrong way – I haven’t been using Dexter as a ‘How To’ DVD – but I have come to the conclusion that I’ve been waffling a bit in the latest book and need to inject a bit more excitement. Chandler said that when he felt a story was lagging he walked in a man with a gun, and I use a similar technique. In the Cormac series I walked in Orlandine, a massive runcible weapon and some assassin drones. In the books I’m writing now such outfield options are not available, so I need to ramp up the danger to, and the outright viciousness of, the participants involved. And of course if I told you any more about this I would have to shoot you.