Here on Crete we have the fantasists who feel that being thousands of miles from their home country enables them to get away with the most outrageous lies (if they happen to have come from London they always knew the Krays) but there are also many interesting and genuine people here. We have Roddy and Ruth, the former of whom played with Frank Zappa and has his own band (The Muffin Men), whilst the latter makes, repairs and works with theatrical costumes, has dressed Nichol Kidman, and has just been working in Belfast on the costumes for ‘Game of Thrones’. Caroline now has her hair cut by an Italian guy in Lithines, who was trained by and taught at Vidal Sassoon. But name dropping aside, there’s a couple here who run an astronomy and art school, we have an ex social worker, teachers and university lecturers, someone who worked on the sets for Star Wars and many others besides.

The latest addition to the list above, which is by no means complete, is the guy who may be buying our old car. Whilst chatting with him and his wife in the Gabbiano we learnt that he is a Norwegian narcotics cop, which caused a pause in conversation whilst Caroline and I realized we were gaping.

There is, I think, a bit of a selection process going on. Generally the people who buy a house here, whether they are immigrants or have a holiday home, have ‘something about them’. This something has enabled some of them to accrue the money for such a purchase, but it is also what has driven them to step outside their comfort zone and take that risk. Others who have accrued no more money than what was in their house in their home country, and now live on a pension, also stepped out of that comfort zone and took a larger risk. But of course we must not neglect those who ran away; who thought that the problems they had in their home countries could be solved by a move here, and discovered otherwise. They generally don’t last.

Wednesday 7th September
Well sometimes you get blindsided. Whilst talking to a couple who we’ve met a few times before, we moved onto the subject of books and, inevitably, some mention was made of my books. We were sitting in Revans at the time so I pointed to the book shelf in the bar and said there was one they could try. The guy, Trevor, asked, ‘Which one?’ I pointed to the shelf again and said, ‘Second in from the right on the top shelf,’ and he asked, ‘But which one?’ ‘The orangey one with my name on the spine,’ I replied, slightly baffled. ‘But which title?’ he finally asked. ‘Hilldiggers,’ he replied. ‘Oh yes,’ said he, ‘I’ve read that one. I think I read most of your books before we moved here – the ones with Dragon in them, the Skinner ones and some others.’ I was a bit gobsmacked because, of course, I’m so used to talking to people who haven’t read my books, don’t have much interest in science fiction and quite often those who don’t read many books at all.

Thursday 8th September
Jupiter War has now passed the 100 thousand word mark and those of you sitting there with calculators will know that I haven’t been sticking to my ‘2,000 words five days a week’. I could of course include the word-count of my blog posts but even that won’t bring me up to 10,000 words a week. However, I know that last year I went back to England with 80,000 words of Zero Point done whilst this year it’s likely I’ll be heading back with the first draft of Jupiter War completed at, probably, about 130 or 140 thousand words. So do I hammer straight into the next book? I don’t even know the title, story, whether it’ll be an Owner or Polity book or even one set in the Cowl future. I’m thinking that maybe now is the time to turn to some short stories to send off to Asimov’s and other magazines, or to any anthologies that will have them. One of those short stories may then grow in the telling and actually turn into the next book. We’ll see.

Friday 9th September
Ah I see that Obama is going to inject 450 billion into the American economy to create jobs and cut taxes. Well, maybe if he, and other parasite politicians before him, had left that money in the economy in the first place there wouldn’t be such a problem, though of course this money isn’t coming out of some sort of emergency fund; some wodge of cash stacked away for a rainy day. It’ll just be a further addition to America’s 13 trillion debt. But don’t you just love that ‘inject money to cut taxes’? It’s rather like raiding someone’s larder then, after feasting on the food, noting that the guy stocking the larder is starving and might not be able to fill it up again, so giving him back a couple of loaves of bread to keep him alive. I often wonder how those who jumped on me, and played the race card, when I first criticised the Obamessiah, feel about him now. They probably still think he’s wonderful but hamstrung by the dark forces of conservatism. Certainly the leftist dipshits at the BBC, despite all the contrary evidence, still think the sun shines out of his arse.

Monday 12th September
Since, both this year and last year, I’ve probably given away more plants than I’ve actually planted in the garden, it’s nice when someone reciprocates, and especially nice when it’s a success. After delivering some bits and pieces to a guy called Rich, he dug up a couple of runners from plants in his garden. Of one of them he told me, ‘It doesn’t look much, but the scent is good.’ (This was a plant I’d read about in the gardening section of ‘Athens News’, but cannot remember the name) I duly planted it in a pot and it shot up over the summer. Then, two evenings ago when we came back from the beach, we noted a perfume in the air as we stepped out of the car. As we walked down to the house – about fifty yards from the car – the scent grew steadily stronger and stronger. Rich’s plant had flowered, was surrounding by humming bird moths, and had a scent probably an order of magnitude stronger than jasmine. Here it is, does anyone know the name? 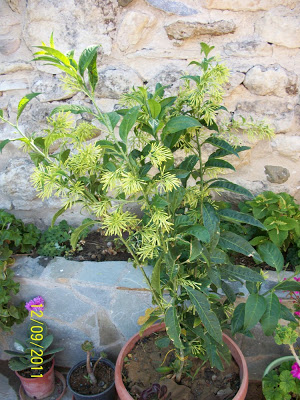 Tuesday 13th September
Ah, apparently the Italian government is to introduce more ‘austerity measures’ because, like the rest of the PIIGS it’s on the slippery slope. After overspending since year dot, mismanaging their economies, pissing money up the wall on silly social projects, hamstringing businesses with fucked-up safety and environmental legislation and always increasing bureaucracy, employing huge numbers of time-wasting paper-shuffling overpaid bureaucrats and generally demonstrating their inability to run a piss-up in a brewery, I have no doubt that the politicians will be the first to subject themselves to ‘austerity’. Doubtless they’ll be reversing the screw-ups listed above, along with cutting their salaries down to something within the realms of reality, ceasing to employ family members in non-jobs, ceasing to misappropriate funds, ceasing to submit huge expense claims, ceasing to take long expensive foreign trips and ceasing to lie and squirm and evade responsibility. Doubtless they’ll also be culling their number and ceasing to look at the world through rose-tinted glasses of party-political ideology. Oh yeah, and have you heard about the cheese mine on the moon?

The BBC is apparently going to have a discussion about the ‘doubts that the governments of giant economies can pay their debts’. Well let me let you in on a secret: most of them can’t. Let me let you in on another secret: lawyers; academics; graduates in political science and sociology; union reps; ideologues and generally people who have had no experience of real life, actually working for a living and real finances (i.e. people who don’t get that you don’t spend more than you’ve got on something that’s never going to make a profit) aren’t the kind of people you want running ‘giant economies’.

And now just for a bit of amusement, and because Chris thought it would be amusing too … Chris was so pleased to sell his wife’s car he celebrated with a bottle of cider, whilst naked: 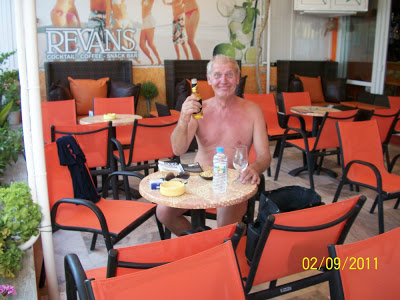