Skip to content
I just dumped a number of blog posts in my Unused Blogs file for the same reason many others are there – too miserable and negative. Now I shall try to be positive because, it often is a matter of choice. Depression can be at a point where you can choose whether to sink lower or pull yourself up by your bootstraps and so it is with grief. I can continue chewing on my own liver by hauling up horrible images and memories for my inspection, or I can choose to deny them and think positively. Hang on, this is getting miserable again. Stop now. Smile. 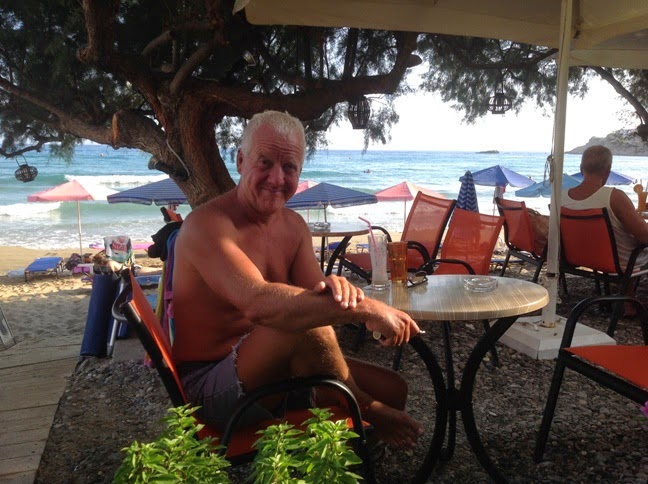 So, Transformation II or Factory Station Room 101(provisionally) has winged its way off to Macmillan. After that, being positive (this was two weeks ago) I opened up a file called ‘Dr Whip’ which I again read through (and no, this is not a short story destined for the pages of Spanking Weekly). Here is another weird character who had a nasty encounter with Penny Royal. He appeared in the first book along with that character Tuppence who appears in my story The Other Gun (Asimov’s). I removed both of these completely from the book, which I guess demonstrates that I do that editorial thing of killing my babies. Asmodeus Whipple had a nasty encounter with Penny Royal and has undergone, and is still undergoing, a transformation…
However…
Sorry to be negative again, but I just could not summon up enough interest in it to continue. Still too soon I guess. I turned then instead to Transformation III or Spear & Spine (provisionally) and started editing my way through that. I suspect that with the new publishing schedule of my books of January to February I’ll be sending that in a year before it’s due. 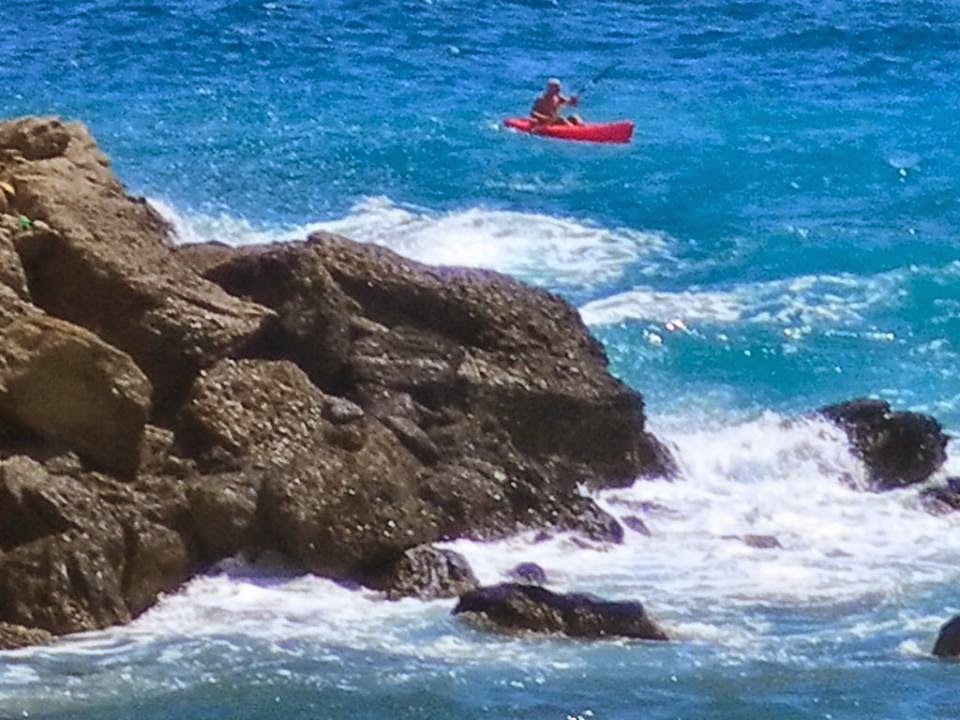 In other news it seems I am now addicted to kayaking. Only yesterday, I took the thing from Revans in Makrigialos up opposite a restaurant called the Kariotsina at the far end of Koutsouras, then later took it in the opposite direction to a beach called Lagada. Those of you who don’t know this place won’t know what I’m talking about, but suffice to say it was a good few miles. This was all after my ‘big swim’. I’m now wondering whether I can go to all three extremes in one day: the two kayak runs above, my three-quarters of a mile swim, all after a morning walk of about eight miles. Of course the problem with this is that I won’t get much else done and will spend most of the rest of the day comatose on my sofa here. 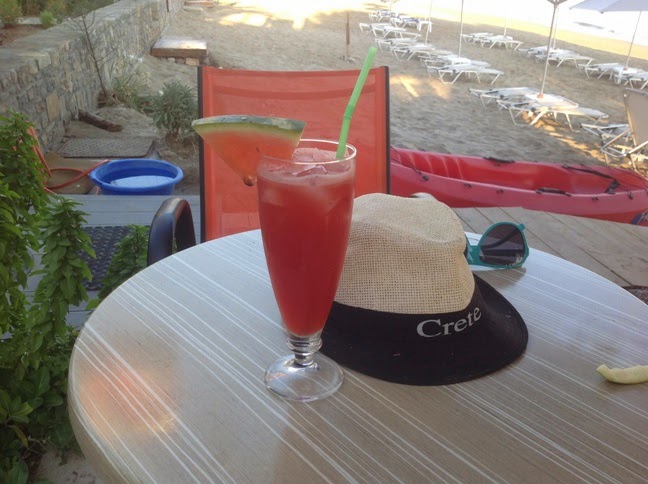 It is now September and a crappy one for Crete too and, despite the above, I am not spending loads of time at the beach. I dump my stuff by a sun bed but don’t spend much time on the thing. I sit in Revans bar, but am not boozing till darkness. I drink fruit juice and piss about on Facebook and Twitter via the internet connection there – a pastime with limited appeal. I have therefore started Greek lessons again. 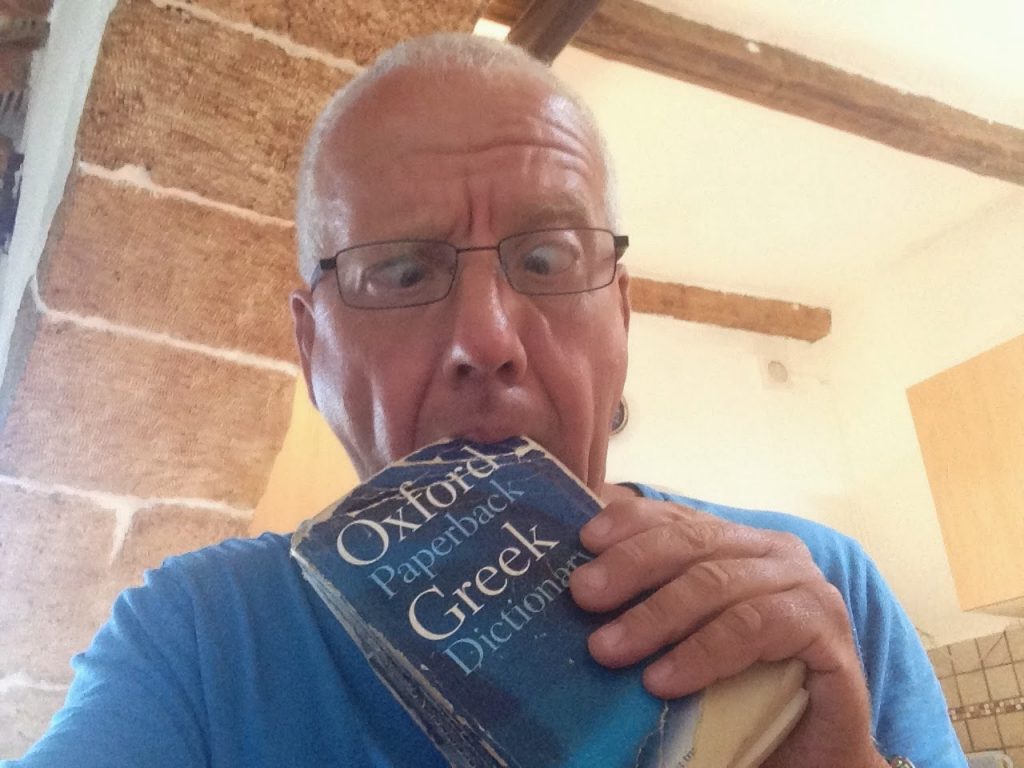 In English there are average word counts that differ for people’s speaking, reading and writing vocabularies. I’m not sure what it is for the first of these but, in Greek, I’m sure I’ve learned many more words. Sure, there are big gaping holes in my knowledge but if I could actually use the words I do know I’d have a fair shot at conversational Greek. To that end, the lessons Anna is giving me are slanted towards speaking and grammar. At present, she writes out a page long text for me in English. She reads out a sentence to me at a time, which I write down (so I don’t forget it) then speak in Greek, with her correcting me along the way. This takes up half to three-quarters of the lesson, whereupon she starts hitting me with various phrases in English that I then have to translate – testing all my weak points. Afterwards she hands over the English text and my homework is to translate it into written Greek. 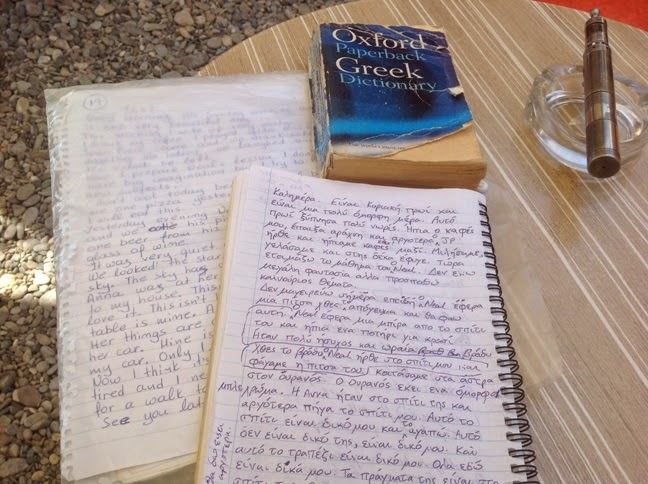 Maybe, one day, I’ll translate all of Gridlinked into Greek and get it published here. That’s if I’m still capable when I’m 86.