Somebody asked me on Twitter about my chilli sauce recipe. It’s quite simple: I put half a kilo of chillies and a bulb of garlic through a food processor (green bits removed from the chillies and the garlic peeled, obviously). This lot goes into a saucepan with two cups of vinegar and two cups of sugar and a dessert spoon full of salt. I bring this to the boil for about five minutes, take it off the boil to stir in corn flour (mixed with a bit of cold water) to thicken it, boil it up again then put it into hot jars or bottles – use those with metal lids. This is the basic recipe but variations include adding red peppers or tomatoes to bulk it out and bring the heat down a bit, and another recent variation where I’ve added root ginger which adds another dimension to the heat. I might also try adding Cretan basil too since masses of the stuff grows here. I also heard about a chilli dressing in which peaches are used and, since we’ll be getting good crops of peaches henceforth, I might try something with them. Here’s our very first crop: 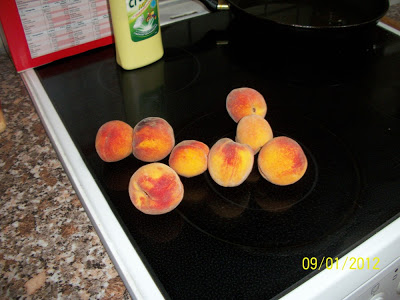 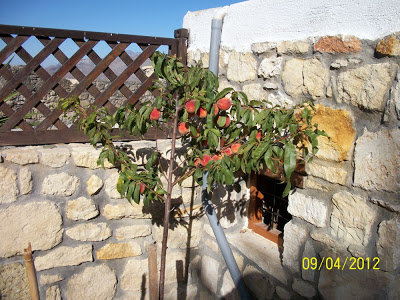 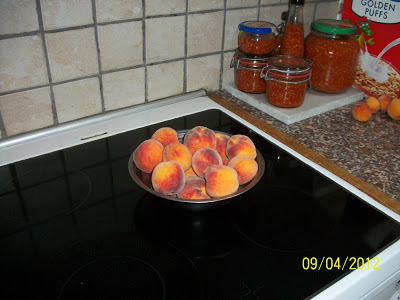 Saturday 8th September
I just watched a program on BBC World about Shanghai which was quite interesting and rather confirms my contention that in the next ten years we’ll be seeing Chinese on the beach here and buying holiday homes in the surrounding area. However, I just kept on cringing every time I heard the tagline of this program: ‘Shanghai, the city where skyscrapers grow faster than trees’. No shit Sherlock! Whoever made that one up really needs to get out of the office, and out of the city a bit more. Perhaps the BBC should employ David Bellamy as an advisor, ho ho. To be quite crass, if skyscrapers didn’t grow faster than trees those aeroplanes would have missed the World Trade Centre by several thousand feet.

Monday 10th September
Francios Hollande claims he will turn the French economy round in two years. Apparently, against all reason and the wisdom of Keynesian economics, pissing money up the wall by employing more public sector workers and driving the ‘super rich’ out of the country with a 75% tax rate doesn’t seem to work. He’s now got to make about 30 billion in cuts. Socialists talking economics would be hilarious if they didn’t get into power. As it is Hollande is like a donkey claiming to know how to drive a truck.

The paralympic games have been the most successful ever. ‘This success must be placed at the feet of athletes like Oscar Pistorius.’ Really, some BBC presenters really need to think very hard about what comes out of their mouths.

Tuesday 11th September
Ah, recovering at last. I had an infection in my eye for a few days and generally felt quite rough (hence the tetchiness of the comments above) then, as I was recovering, we went for a meal at the Gabbiano and came back here with a litre of cinnamon raki, which we polished off that evening. The next day we went along to a charity event to raise money for a dog’s home here, whereupon I drank far too much wine. So, a couple of days feeling rough because of a bug followed by a couple more that were my own fault. Back to work.