We’ve had an abrupt change in the weather here with the 9.00AM temperature dropping 6 degrees and these white fluffy things appearing over the mountains opposite. This is after a night during which I took two cold showers and kept having to turn on the bedroom fan. You’d think that such a drop in temperature would result in us feeling cool, but not so. The humidity has ramped up – the dead leaves outside are no longer crispy – and the outside temperature feels only marginally cooler. Meanwhile, the house, having soaked up the previous days of sunshine, is now releasing it like a storage heater and it’s only half a degree cooler inside. From experience I’m guessing this weather change is due to a hot and damp south wind coming in and hitting the cooler air from the North. I’m also guessing that another usual consequence of that will be occurring in Makrigialos: a rough sea driven by that wind eating the beach down there. Now we’re waiting to see how things will turn out this coming Sunday, with the forecast temperature supposedly heading for the red zone. 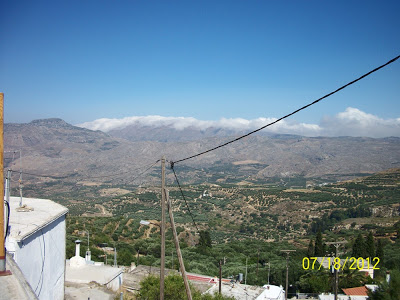 The Dr Whip story is now approaching 9,000 words with an end in sight. We’re off to Sitia shortly for some shopping (because this seems likely to be the coolest day), so I won’t be getting much more of it done today.

Thursday 20th July
Um, change of direction today. I was considering how the Dr Whip story, which I extracted from the first book of this Penny Royal sequence, might well be reinserted. Certain aspects of the short story key neatly (well, with a bit of reshaping) into the whole … perhaps. While I consider that I think I’ll do some of the second book. I have some sequences in mind involving the prador which should be fun to write.

Friday 21st July
I’m getting more and more impressed with my Kindle every time I use it. The thing is easier to read than a book, yet essentially can be a library of them. Only yesterday I wanted to look up the spelling of a word for a crossword I was doing (tenebrous) then remembered the free copy of the Oxford English that came with that device. I later decided to subscribe to Asimov’s, signed up in just half a minute and had the first issue of the magazine a few seconds later. 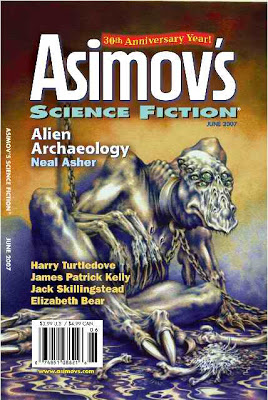 For the guy who asked me about how to subscribe to Asimov’s : you hit the ‘Menu’ button next to the ‘Home’ button, select ‘Shop in Kindle Store’, go to ‘Magazines’. I had it there as a suggestion because of my previous SF shopping, but you can bring up the keyboard and search it out. You can buy a single issue of the magazine for £2.79 (or thereabouts) or you can subscribe to it, with a 14 day free trial, for £1.99 an issue. It couldn’t be simpler.

Okay, I’ve started on the next Penny Royal book and, unusually, I’ve remembered to record when I’ve started writing a book. This means that when someone asks me that old favourite in interviews, ‘How long does it take you to write a book?’ I’ll actually be able to give an answer that’s better than a guess. I slid into the writing easily, quickly polishing off my first 2,000 words (in fact I did them in about 3 hours) and have plenty of ideas of where to head. However, I must watch my tendency towards character proliferation. Perhaps I’ll start killing a few of them off…

Saturday 21st July
A group of Norwegians is staying in the rooms above Revans. One of the women I recognize because it was she who last year announced that something terrible had happened in Norway. This was of course Anders Breivik’s killing spree. And now, in America, we have had another shooting. The frequent response I find to this sort of thing is, ‘The world is going mad,’ but no, not really. This sort of shit has been going on since the first human picked up a rock and thought it might come in handy for breaking a skull. What we really should be amazed about, with our population now over 7 billion, is the infrequency of such events. Oh, and by the way, I guarantee that by the time I post this on my blog someone will have claimed that this is all due to violent films like Batman, which of course ignores the short history of film and the rather longer history of human violence.

Sunday 22nd July
It was our anniversary yesterday and some surprises were in store. We went to a shop (owned by the same people who own Revan’s bar) so Caroline could satisfy her shoe and bag habit on this special day. While we were there the daughter, Nicky, came out with a marble chessboard and cast pieces which I thought she was going to try and sell to us. It turns out this was a gift for our anniversary from her family. Next we went to the Gabbiano for a meal and as usual ordered white wine. What turned up was a bottle of expensive Champagne bought for us by Chris, our English neighbour up here. 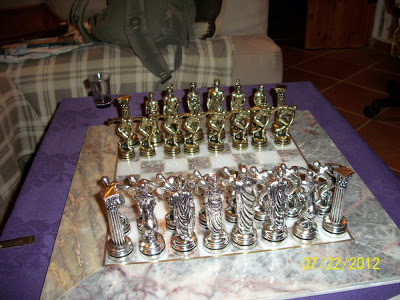 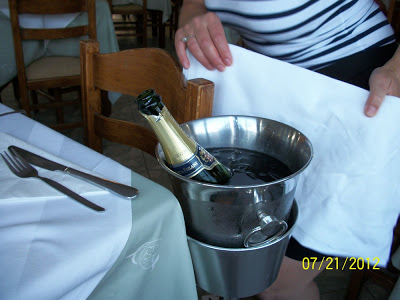 A very enjoyable meal ensued only slightly marred by the spectacle of some anti-smokers getting silly. They came in demanding a non-smoking area in a restaurant open on all sides with a breeze blowing through. Marco showed them to a table, doubtless on the basis that they didn’t have to smoke there. After seeing someone smoking two tables away from them they got up and stormed out. I had to laugh. They must have taken a wrong turning on their way to California. This is Eastern Crete where the denormalization process and lying propaganda of groups like ASH hasn’t yet got a grip. Their chance of finding a restaurant with a non-smoking area (anywhere but in a stuffy back room) was remote to non-existent. It’s also the case that restaurant owners here can’t afford to turn anyone away, and are less likely to miss the belligerent anti-smokers than the more common smokers who, incidentally, tend to drink more and are less likely to whine.

Monday 23rd July
Oh please spare me from the Greek families descending on sun beds ‘free for customers’ and marking out their territory with half-drunk frappes bought elsewhere; from the young men hogging an area of seafront and displaying like cockerels with bats and ball to their current squeezes preening nearby; from the fat brattish boys; from the mothers being dragged about by invisible umbilical cords connected to their little darlings; and from their bloated husbands who think they’re Mr Universe fresh from a weight-training session. Yup, it’s Greek holiday time. But at least they do enjoy the beach and the sea, which is in complete contrast to many English abroad who don’t like the sea, find the beach too hot, and spend their time sitting inside a bar getting completely pissed.

Tuesday 24th July
I’m steaming along into the next Penny Royal book and as ever constantly surprised that I can just sit down and write my 2,000 words without too much trouble. In fact, on the last couple of occasions, I polished them off in about two hours. Perhaps it’s time for me to shift into another gear and aim for 2,500 or 3,000 a day? No, because today I’ve only managed 1,500 words and am pondering a loose plot thread that might have to be extracted all the way back through the previous book…