Skip to content
Wednesday 27th June
It’s been exceedingly hot here lately and I wonder if that accounts for the latest visitor we found squatting on the spare room floor. Judging by the stuff I write about you’d think I would be alright with creepy crawlies. Generally I am, snakes for example don’t bother me at all, though I’m not one of those nutters who will pick up a spider, and when a grasshopper the size of Cuban cigar lands on me I definitely jump. This particular creature had my skin crawling and since squashing the fucker I’ve been using more caution when picking things up, and carefully watching where I put my hands. 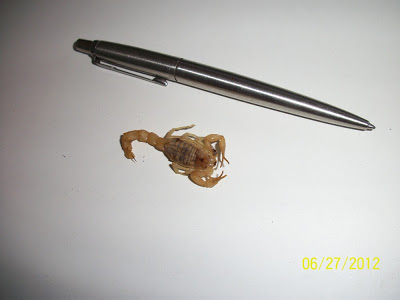 Having completed the first draft of Penny Royal (1) I’m again contemplating what to do next – whether to just go straight into the next book or write something shorter – and it’s occurred to me to do something tactical. The large section I extracted from Penny Royal (1) has the makings of a short story or even a novella. If I get that done and aim it at some American publication, (maybe Asimov’s which, incidentally, you can subscribe to through your Kindle now), and if its accepted, that should be help towards promoting the Night Shade Books release of the Owner series next year. Yeah, that’s what I’ll do.

Thursday 28th June
I’ve started on the Tuppence thing (this was the name of the main character in the stuff I extracted from the Penny Royal book) and can see how it will develop. There are about 18,000 words there so we’re talking about quite a long story when I’m done. I’m also going to do something I was contemplating above. I’m going to sign up for Asimov’s through my Kindle. Since Caroline bought me the device for Christmas I haven’t really used it and I really ought to. I really ought to get back into some reading, since the last book I read was on April 1st. Okay, to work.

Friday 29th June
The winds of Crete arrived yesterday (that’s the title of an interesting book by the way) so, after I’d done my work for the day, we didn’t bother heading down to the beach. From past experience we knew that we’d end up being sand blasted and that the sea would be chilled by the wind. Instead we went off to Sitia for some shopping, where we first headed to a wood yard for some timber. This I brought back and used to repair our hall bookshelf (knackered by the damp in there) and which I’ll use to make some shelves for the kitchen – finally finishing that job off. Yawn.

Oh, and just to counter that horrible picture above, here’s our datura tree: 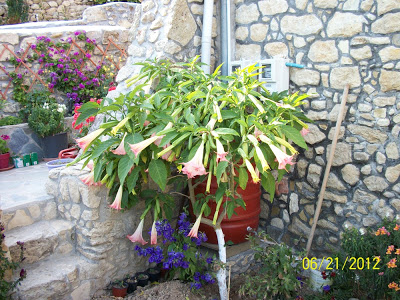 Monday 1st July
Blimy, it’s July already. I could say I’m baffled about where the time went, but looking around me I can see precisely where it went: into a kitchen, a bamboo ceiling, the garden and finishing the first draft of Penny Royal.

We’ve had no more nasty visitors in the house but, contemplating the fact that there are very few ways a scorpion that size can get into the house I’ve come to a conclusion that makes me shudder. A couple of weeks back I obtained the spray and gas canister to rid a building of wood worm, which I needed for the ruin. This was all pretty poisonous stuff so to spray the beams I put on overalls and a raincoat from the car while spraying the beams. After I’d sealed off the ruin and then released the gas canister inside I came back down here and dumped jacket and overall in the spare room. Now, that jacket was in the boot of the car which, a week prior to this, I filled up with wood from the side of the road (I’m always grabbing wood like this to go in the stove or use for various repairs etc). I’m fairly sure now that I picked up the scorpion with that wood and that it probably then crawled into my raincoat. I probably had the thing in my pocket or crawling around inside the coat while I was spraying. Okay, enough – I really don’t want to think about that much more.

Back to work on Tuppence (what is it with this coinage thing?).

Tuesday 2nd July
I’ve come to the conclusion that the ‘Tuppence thing’ needs chopping down even further. There’s a character in there called Dr Whip who, at the instigation of Penny Royal, is transforming into something yet to be revealed. He’s an interesting character with an interesting story but, I’m finding him at a loose end. Better I extract him completely and do something separate with him.

That’s all for now.