It’s been boiling hot lately – 25C up in the village and 30C down in Makrigialos – so on Sunday we decided to go for a swim. It being Paska we found that most of our usual haunts were closed so tried one called by some ‘the shack’ (I tried translating the Greek name for it and its comes out as something like ‘service’). There we had some souvlaki before venturing down on their sun beds where, despite the umbrella, we were soon frying. Into the sea for a cool off, therefore… I have a feeling that we have been in the sea before at this time of year and my recollection of the experience is the same. It was too hot not to go in the sea but the temperature contrast was almost painful. I got past that by throwing myself in head-first when the water was deep enough (about twenty yards out) while Caroline dithered standing on tip-toes with the water up round her waist. I later took a swim to the harbour, checking everything unusual under the water because of someone telling us of a nine-foot shark recently caught off the coast here. 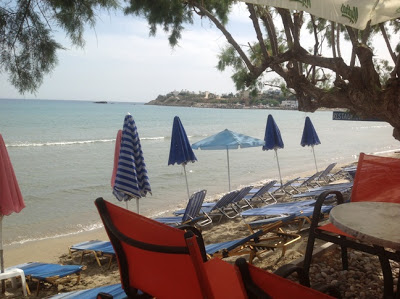 Tuesday 7th May
Of course when I write about our time here on Crete it always reads like Paradise but, unfortunately, Paradise has its snakes. The first snakes we encountered where neighbours that just would not leave us alone until I finally got angry enough to shout at them. At the time we got on okay with another neighbour called Yorgos. Now things have switched around. The neighbours that were originally a pain are no problem at all now, while Yorgos is a dick. He plays his crappy Cretan music at ridiculous volume as if it his prerogative to ensure everyone in the village hears it. Meanwhile some new neighbours have turned up between us and him. Three houses next to us are owned respectively by three daughters but have only been used occasionally. Now one of the daughters, after a divorce/depression/affair saga three years ago, has moved here with her new squeeze. We’re hoping they’ll tire of Yorgos’s loud music and shout at him in his own language.

Wednesday 8th May
After I’d polished off my 2,000 words yesterday we went down to Makrigialos more in hope than expectation of a swim. It was a mistake. It was hot up here and as we drove down it got progressively cloudier and cooler. In the end we found ourselves sitting in Revans buggering about on the internet, drinking wine and watching hardier souls than us braving the sea. As we returned here the temperature steadily rose again and we ended up sitting outside until sundown. Later we returned inside and got all soppy watching Forrest Gump.

Thursday 9th May
We had a down pour yesterday but, even so, the temperature was up in the 20s. It was really needed because after a dry winter and the soil here was like powder. As usual I did my 2,000 words then spent the rest of the day finishing off Elizabeth Moon’s Trading in Danger (brief review here). Later we started on the third season of Deadwood – it took me one episode before I even understood half of what they were saying.

This morning there’s a bit of cloud about but whether or not it’ll rain I’ve no idea. I wish it would. After just one day of it the plants out there are looking a lot better – rain always boosts things better than any equivalent amount of watering. And, regarding plants, as is becoming a bit of a tradition now, here a picture of how my salad veg is getting on just to annoy Heidi (next door neighbour in England) and my brother Paul: 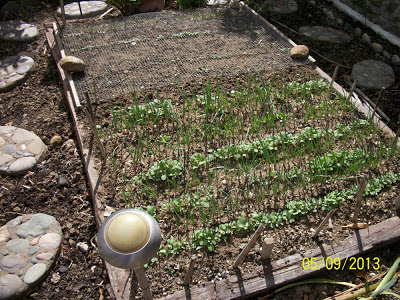 Friday 10th May
Two days of cloud and a brief heavy shower and we wake this morning to rumbles of thunder coming from Sitia way. I suspect we’re in for a hammering but it’s needed. The downpour of the day before yesterday still left dry patches under various shrubs and other sheltered places where the soil remains dry and powdery. I am also still finding places for our waste water, while last year at about this time I was using it to wash down paths. 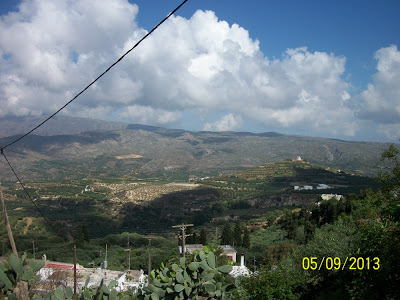 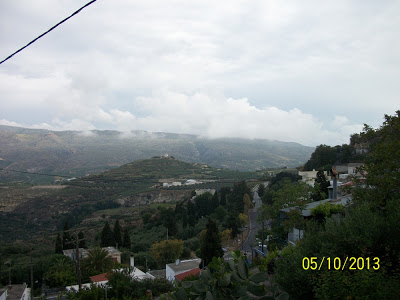 Writing: Penny Royal III is clear of 130,000 words but I’m now working a bit slower as I chop out large chunks of text and shift them around. It’s very unlike me to do this but yesterday I chopped out a whole space battle, shifted it off the end of the book where I keep such ‘spare’ bits, then wrote a whole new one at a different location. Why? Because there was something the Polity AIs had to know that would stop them dead in their tracks, while there was something a nasty AI had to know (not Penny Royal) that had to put it on a different course. There are fine lines to walk here. I am writing about entities with superior intelligences who won’t be fooled my something a dumb human would miss, so they have to be a few steps ahead of the story. Meanwhile I don’t want to insult the intelligence of my readers, but simultaneously I don’t want them to be confused by what’s going on.

Saturday 11th May
Yup, it did absolutely hammer down yesterday and I finally had to admit that two of our roof windows weren’t dripping condensation but are leaking. Off to Sitia today for shopping inclusive of a couple of tubes of mastic for repairs. Then down to the taverna this afternoon to put up this blog post along with the two book reviews prior to it.