Over the last couple of years Nectarius, husband to Eli who owns the raki still and building next to our house, has co-opted me into the raki making. Since he and she don’t live here it’s a bugger for them to come to stir their barrels. This needs doing every day because the fermenting grape mush quickly forms a thick crust that slows down the process. My job is to go out every day, shove my hand in and scrunch up that crust, then dip my arm in and stir it into the fluid below. I was worried about cleanliness and the possibility of introducing vinegar bacteria, but the initial fermentation is so fierce this doesn’t seem to be a problem. 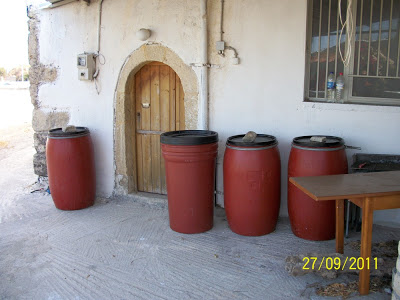 Caroline recorded the last rain of spring on May 19th. While we were down in Makrigialos yesterday it spotted a bit and we were told it had rained here in Papagianades. The roads were wet on the way back and when I stirred the grape mush I found about half an inch of water sitting in the barrel lids so it must have tipped down, bearing in mind that the barrels are underneath a metal roof. So, we had zero rainfall for four months minus one day.

Friday 21st September
There was a discussion on BBC World about the Moslem reaction to that American film (and the subsequent French cartoons) and the talking heads were busily discussing what the reaction should actually be. Just a thought here, but how about behaving like and adult and not throwing your toys out of the pram? I note that there was a complete lack of burning embassies, murdered consuls and riot deaths when The Life of Brian came out. There was also much talk on the show about freedom of speech and how much should be allowed. The answer is quite simple: all of it. This was basically what various Americans have been saying but the good old BBC interviewers weren’t very happy about that and tried to shut them up. Perhaps they were uncomfortable about the way the state has undermined free speech in Britain.

Saturday 22nd September
Wow, during the backlash in Libya against the militias the main target was the extreme Islamist group accused of the embassy killings. It was notable the lack of cries of ‘God is great’ in this protest. These were younger people in T-shirts and sunglasses with a lot less spittle on their chins, which were generally shaven. It was nice to see this attack of sanity.

I see that Mitt Romney has had to reveal how much tax he’s paid, and the fact that his worth about 250 million apparently means that he’s ‘out of touch’, while Obama is of course a horny-handed labourer. Now, just a thought here, but for a country that is trillions in debt wouldn’t you want someone in control who knows how to accumulate wealth? The implication from the Democrats of course is that here is a rich man creaming a fortune off the backs of working plebs, once again demonstrating how socialists fail to grasp that the economy is not a zero-sum game.

Tuesday 25th September
Enough of this political shit. I put down my ranting to me not feeling so well over the last few weeks and therefore having less immunity to some of the idiocy I see on the TV. But now back to writing. 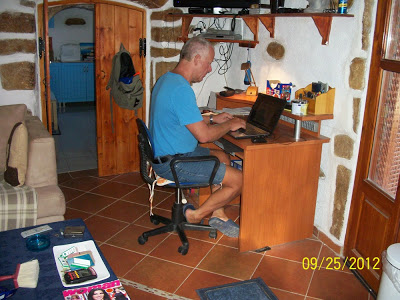 Penny Royal II is definitely more than halfway through which means I’m course to finishing the first draft in November (maybe). This gives me nine months to do the next book and then tidy up all three. I am very much enjoying myself with this – venturing into some weird territory with forensic AIs, strange physical transformations, some games with the unreliability of memory when it can be edited, all of course interspersed with exploding space ships.