It was nice to stumble on a page detailing sales in Borderlands. Sitting at the top of their trade paperback (import version) list was The Departure. Hopefully this is a foretaste of how the book will go when Night Shade Books release it next year. Next twittering this I then learned (thanks Jesper) that its star rating has been steadily climbing on Amazon, rather confirming my suspicions about a large tranche of negative reviews appearing there, very quickly, when it was first released, and mostly from people who had never felt inclined to review a book before.

Update:
I just got an email from a fan who read The Departure and has preordered Zero Point. His name is David Davis and he invited me for a drink at the House of Commons to see if he could persuade me that not all politicians are rampant thieves. I suppose it’s possible he’s that David Davis, considering he studied molecular and computer science at Warwick, but I suspect a wind-up. 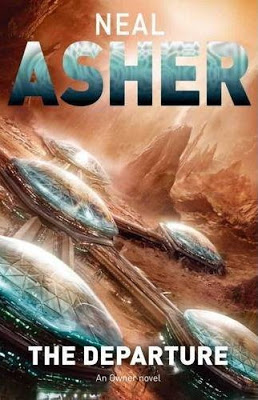 So you could call that good news, but of course the cosmos has to restore balance, so I learn by text that my mother has cancer. There’s not really very much I can say about that.

Monday 25th June
Well done Egypt! Given a chance with democracy and you vote for a theocracy! Of course the Muslim Brotherhood president is making all sorts of moderate noises so I’ve no doubt the tourist trade will flower under the new regime and no one will get whipped or stoned for man-on-man action, drinking beer or getting their tits out on the beach. And certainly Egyptian women won’t be impelled to dress like dust-sheet draped daleks. I’m so sure that those enthusiastic crowds of supporters – mostly young bearded men – won’t try to enforce their ideology on the rest of Egypt. I’m sure that anyone suspicious of the Muslim Brotherhood (and its dearth of sisters) is just culturally insensitive and ignorant.

So, while Caroline watched England’s exit from the European cup last night I sat out on the terrace drinking Toplou (though I did return inside to watch the humiliating extra time and the penalty shoot-out). Now, I had caught quite a bit of sun yesterday so that accounted for much of the colour of the face looking back at me from the bathroom mirror, but perhaps not the purple hue and the eyes like kidneys. Checking this morning I note that this dry white wine is 13.5% ABV. Um. Back to the 11% stuff from Lidl, then.

9.50
The end is nigh! The Penny Royal book now stands at 138,932 words with just a few more sections to write for me to complete the first draft, and I reckon I’ll be polishing them off today (I’d better finish them today – I promised Caroline a meal out tonight to celebrate that particular watershed). This should take the book clear of 140,000 words then after that I need to look at doing some of those chapter starts, each of which average about 250 words so that’ll add another 5,000. The book then should be about the length of The Technician. Okay, enough waffling here, to work…

12.20
That’s it: I’ve felt justified in finally writing ENDS at the bottom of the last page. The additional sections brought the total word count to 141,700 but then that dropped again as I removed to another file about a 1,000 words that came after that ENDS – sections I had removed to perhaps later use, bits that didn’t fit the plot, the occasional irrelevant ramble. That’s it for the first draft, but I certainly haven’t finished. I have the bits to do as noted above, there’s stuff that needs tidying, firming up, fining down, like, for example, I must make one character hate a piece of jewellery because it matches the colour of the eyes … she had. But it’s like a stone statue. I’ve carved roughly, I’ve taken out the little chisels for some more fine carving and it is now identifiable as the finished product. Now I need to do some sanding and polishing and perhaps that will reveal faults that will require the little chisel again.

I hope the arm doesn’t drop off.