Though fairly bright yesterday it was windy, which dragged the temperature down a bit, so I lit the stove. As Caroline pointed out, central heating is just not the same, no matter where the thermostat is set, and it’s nowhere near as fast. Within about ten minutes the house temperature had risen by two degrees. Later, while preparing food, we put the saucepans on the stove to heat up initially, only finishing the job on the cooker. Then well fed we didn’t bother with baked potatoes or chestnuts. Maybe another night. 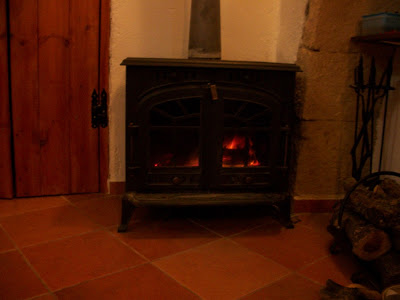 Later still, while we were watching the last episodes of Dexter, I noted that I was feeling rather warm. The stove had taken the temperature up to 28 degrees despite its vents being closed – the wind was drawing rather well through the chimney – and thermostatic control involved opening the terrace doors. This might seem like a waste, but we have plenty of wood, like the old beams from the ruin, and heating up the inside of the house will continue the long process of drying it out. As has been pointed out, the two feet thick limestone and mud walls have been soaking up rain for years and it will probably take years for them to dry out. And, since there’s no damp course, it’s doubtful that they will ever dry out completely. 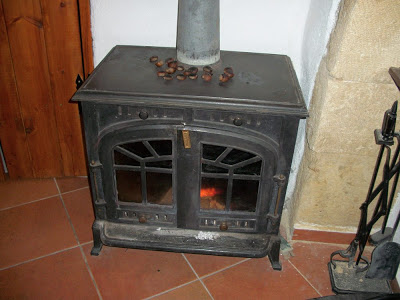 The tiling inside the ruin is now complete, but the exterior tiling has stopped until things have dried out a bit more. Tomorrow we’ll go to Sitia to buy some light fittings that I’ll probably put up next year. Maybe the plumbing will be done this year, if not it’s no problem since we’ll be here for three or four months before anyone turns up. This will give us time to tidy up all those bits that are always left after a building job, do the painting, fit the small furnishings that’ll be required, like shelves, a holder in the shower for shampoos etc, a bathroom cabinet and other paraphenalia.