It now being cool enough for us to have become wimpishly Greek about the temperature of the sea and disinclined to head straight down to Makrigialos once my writing is done, we’re spending more time in the house. It has also been cool enough for me to contemplate the idea of shifting maybe a tonne of tiles from where they would be delivered, which in a mountain village on Crete means never by the house and in our case means at the top of fifty metres of sloping track, after which they must be taken up steps and a further twenty metres of upwards sloping path. So last Thursday we went to the tile shop and ordered what we’d already decided we wanted. This was 85 square metres of assorted tiles, a toilet, a sink, taps and shower and a shower cabinet. They acted fast upon receiving the order and most of what we wanted was delivered at about 6.30PM. 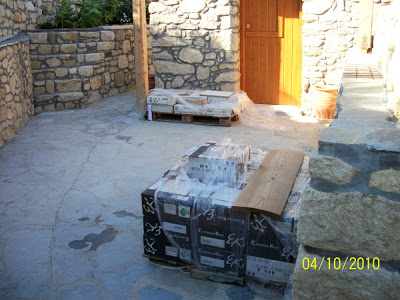 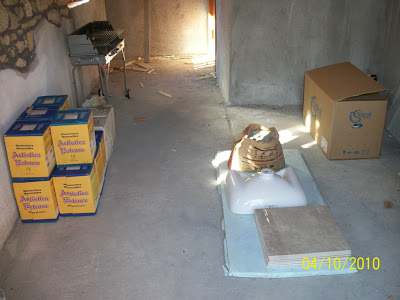 First I helped unload the truck, then I took some of the tiles down as far as the steps in a couple of wheelbarrows. Caroline took these – the bathroom tiles – up and round to the ruin, whilst I carried the rest the whole distance. I finished at about 8.00, had to have a shower afterwards because I was pouring with sweat, then had to cool down for a while before eating anything. Two days later I got that familiar ‘who the fuck worked me over with a baseball bat’ feeling that comes after a weight-training session conducted after a long break, but back to Thursday evening…

After a meal of tempura prawns and garlic bread, we sat watching TV, first a silly American series that is growing on me called The Nanny, then an episode on DVD of Foyle’s War. During this we heard a rumble, like some massive blast from the quarry in the mountains opposite, but this rumble seemed to penetrate right through to the bones. Caroline got halfway out of her seat and paused, but it passed, no need to get out into the open. Really, we shouldn’t worry too much about Earthquakes here – our house has been standing for centuries so the chances are that it will stand for further centuries.

Later we found out that the quake was 4.4 on the Richter scale and southwest of Iraklion, which is basically where we are. It wasn’t really of great note, and it’s always a bastard explaining logarithmic scales to someone and that no, a quake of 5 is not half the strength of a 10. We did have a better one two years ago in the middle of June. This was located just off of Ierapetra and weighed in at just over 6 on the Richter scale.

At about 3.00AM I woke up to a terrible racket. It seemed to me that someone angry had got hold of our front door and was slamming it back and forth in an attempt to get in (the door is loose at that time of year – it shrinks about a centimetre). As I really started to wake up it felt like someone had just opened a branch of the London underground directly below our house and now a train was passing through. I could feel it as well as hear it, and seemed to be able to track its progress below. We didn’t know whether we should get outside – apparently some of our neighbours did – and by the time we were coming to a decision about that, it was all over. No real damage. A crack had opened up in a newly painted wall but, over the ensuing week, it closed up again and effectively disappeared. I guess that’s one of the benefits of having a house partially constructed of mud and sitting on zero foundations – it is somewhat elastic.