As I mentioned before on this blog, I was given some tobacco plants by some friends and am now growing them. Now, I smoke rollies, and one of the problems with rolling tobacco, especially here, is that it dries out. There are numerous solutions to this but generally what you do is put some moist bit of vegetation in the tobacco pouch. We were using mint, because we have so much of it, but then I thought, why not stick a green tobacco leaf in? I did, and, when the leaf dried up I mixed it with my rolling tobacco and smoked it. It was pretty tasteless and only by checking the numerous tobacco growing Internet sites available did I find out why. 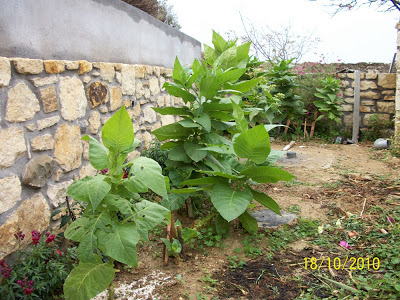 The leaves have to be big, sticky, starting to turn yellow and the stalks snapping like celery before they are ready for curing. When I finally got a leaf like this, which was after the plant was about three feet tall and flowering (and after I topped out the flowers), I partially dried it out and put it in my tobacco pouch. When it was dry enough in the pouch, I crunched it up and smoked it as before. The taste I got was of cigars so later, when I had a good bunch of such leaves hanging up and curing, I thought I’d try an experiment. Before the leaves were completely dry, and therefore still sticky and malleable, I cut out the stalks and with the remaining half leaves made a cigar. Later still I decided that a cigar the size of a cruise missile might not be something I would want to smoke. I took it apart again and turned it into three reasonable sized cigars. They looked rough, but the right colour… 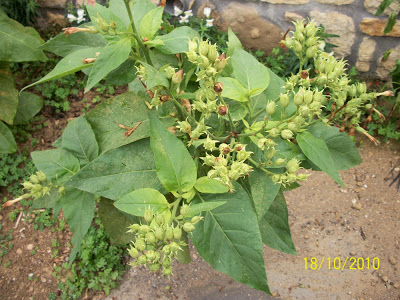 This Saturday we had three couples round, all friends, and one of whom provided me with the original plants. After copious alcohol, I decided we should try one of these cigars. It constantly needed relighting because it was still too damp, but the taste was exactly right, very good in fact. I microwaved the next one to dry it out further and it smoked a lot better. I can’t remember smoking the third one because by then the raki was kicking in and people were dancing in the kitchen.

The next day was kazani day right next to our house. Nectarius, who was stilling raki, obviously wanted us to come over but we hid ourselves away for most of the day, quite rightly suffering a severe hangover. Later, at 9.00PM and to be polite, we popped over and had a few rakis and some barbecued pork. I told Nectarius about the cigars and he said he will provide the raki and I’ll do the cigars. This week I’ll make some more, since there’s another raki making session occurring here next weekend. Out of interest I’ll take pictures of the whole process and post them here.