Here then is the front cover and full jacket of Jupiter War. What you’re seeing here on the front cover is an upright robot and a spidergun, while the full jacket shows a battle scene later in the same book. As always there are things I could say don’t fit – while the spidergun should be there that upright robot shouldn’t – but as always it’s an excellent picture that captures the spirit of the thing. It is real art, which always adds something.

Monday 17th June
On Friday evening we went to our favourite restaurant for a meal and unfortunately have to admit that we’re finding it less favourable each time we go there. In our first years there we enjoyed the food, enjoyed watching Stelios and Nico do their dance and Nico occasionally doing something crazy like walking on his hands between the tables. Last year because of costs and the Greek thing of family first, Nico was given the boot and replaced by a family member who didn’t last. Things were a bit less good there but still we enjoyed the food wine and atmosphere. But the atmosphere has been degrading a little because of financial worries and the three brothers running the place have been smiling less, and now we have the cherry on the top. The Gabbiano gets most of its trade from the hotel opposite which is generally occupied by Scandinavians. I don’t know why, but now there are more Scandinavian families there. Too often we’ll go for a meal to find ourselves eating out in the nursery with screaming food-chucking ‘little darlings’ everywhere, while the waiters just look harried and smile not at all. Oh isn’t it wonderful how he expresses himself as he yells and runs around! Also, being smokers who have been subject to the ‘denormalization process’ for many years we’re finding it difficult to relax and spark up a rollie, aware of the glares with their subtext of, ‘How dare those people smoke around my precious offspring, and don’t they know about the instant death caused by second-hand smoke?’ We’ll be going elsewhere now.

On Sunday evening we went with neighbours Chris and Terry out for an evening at a restaurant near Sitia (love how the grapes grow there). This evening’s sole purpose is to gather up money for a local dog charity. They are looking after a lot of dogs though, I have to add, there are ten less now since a Greek local thought it might be an idea to break in and poison the dogs. 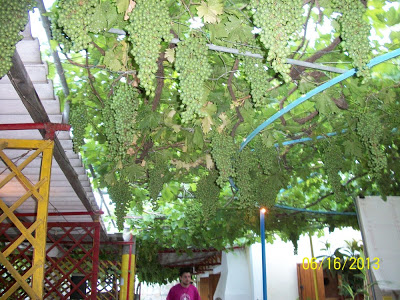 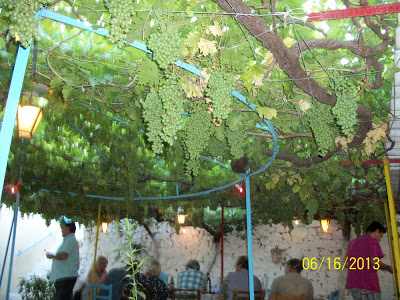 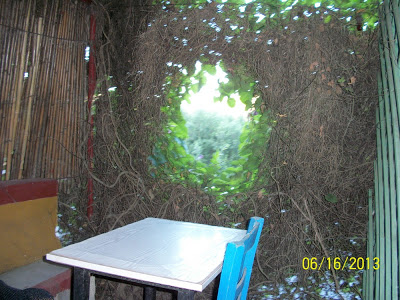 Anyway, on this evening there is usually a raffle and a quiz, but this evening it was something different. There were 5 teams of four people. First off was a dart match during which each member threw 3 darts and the scores were totted up. We won that by dint of Chris and I scoring over 80 with our throws, which no-one else did. And here is our prize, of which we have shared custody. I’ve no doubt that if my brother Paul sees this he’ll laugh while thinking of his boxes of trophies in his loft – including one for winning the Essex Super-league. 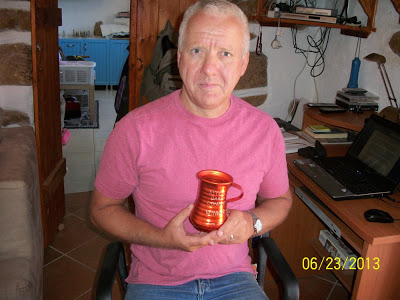 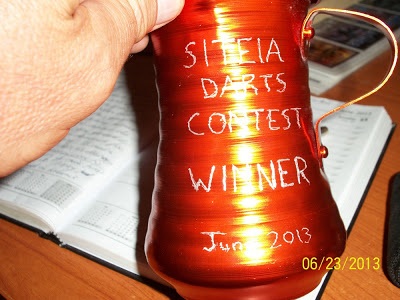 Next it was Pictionary. This dragged on a bit since we were last up and when we had our go we came second. I got the highest number of correct guesses from my pictures but then that wasn’t surprising when my list was: fork, bacon and eggs, smell and T-shirt while my only failure was Groucho Marx.

Tuesday 18th June
So, the BBC story this time was about China running a trial ‘carbon exchange’. The presenter claimed this exchange was needed as she then conflated it with the ‘debilitating’ pollution in Beijing. Now, a carbon exchange concerns the buying and selling of the right to emit CO2: a colourless, odourless trace gas and plant food. This stuff does not debilitate humans until orders of magnitude higher than the present few hundred parts per million in the atmosphere. If you burned all the fossil fuels on the planet you still probably would get nowhere near ‘debilitating’ levels of CO2. So, are the reporters, managers and everyone involved in producing this program item pushing left-wing propaganda, lies and half truths? It seems likely that they are, what with cooling-chimneys as a backdrop to the report – these look ominous but produce neither pollution nor CO2 because what’s coming out is steam. Or are they all as thick as a box of turnips? I have to add that of course the former does not exclude the latter.

Thursday 20th June
When we came here I discovered that a rat had been living in my apotheche (shed). It took me having to empty the shed of everything to drive the thing out, but then that was necessary so as to clear all the shit and piss off the floor, and then chicken wire over the unglazed window kept the damned thing out. Of course these aren’t your usual sewer rats but healthy Mediterranean rats that eat fruit, vegetables and, I was surprised to discover, snails, whose shells were strewn all over the floor too. Either this rat or one of its relatives then took up residence in my composter. This is against the back garden wall and it was using a drainage pipe in the wall to get through. I blocked this pipe and then, in a revenge attack, the rat chewed three-quarters of my sweet corn plants off at the ground. I now open the composter lid while clutching a large lump of fire wood. Last night I woke to the sound of something scrabbling and chewing just outside our bedroom window. I must have been quite a sight charging out naked with a fire poker clutched in my hand. What shot away, hitting the underside of our gate as it went, was a cat. I moment of investigation revealed why: I’d used a polystyrene tray that had contained chicken to go underneath a couple of plant pots. The cat had grabbed this and proceeded to try and eat it, incidentally tipping over two of my plants. Advice to cat: please, go eat the fucking rat.

Friday 21st June
Doncha just love all these high-level discussions by government ministers about how to go after tax evaders? Let me give you a translation: ‘We’ve pissed all your money up the wall and racked up vast debts on unaffordable welfare, social spending, bank bailouts, proliferating bureaucracies, our own unearned salaries and perks, wars that have nothing to do with us and on subsidies for crap like windmills, and now we’re looking for more cash and someone else to blame.’

Wow, there’s a program on BBC world about Georgia. And there was me thinking, what with ‘Report on Africa’, that nothing of importance happens outside that continent. When it first came on I thought interesting, here was a long-running in-depth program about the goings on in Africa, though of course it would be necessary to turn on the ‘white man’s guilt’ mental filter, and I was so looking forward to long-running Reports on India, on China, on America, but it seems those places are not sufficiently of interest to the BBC.

Sunday 23rd June
Plenty of flowers in the garden this year. We have lilies that seem to be turning into triffids and this year we haven’t had the long hot wind destroying the flowers on the brugmansia. 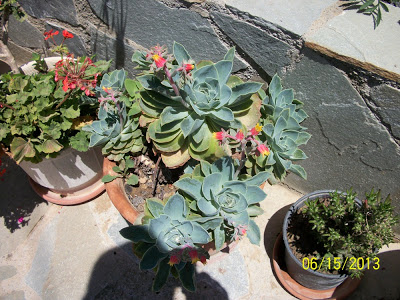 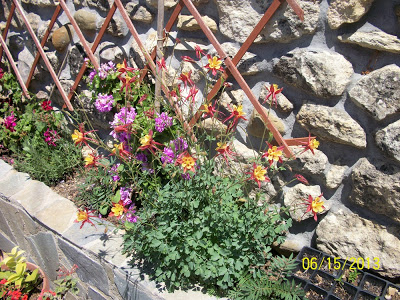 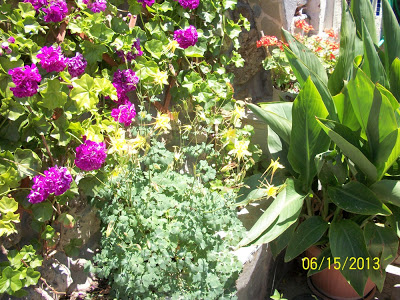 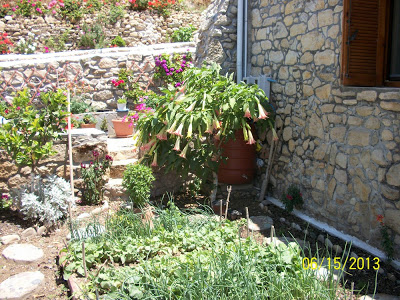 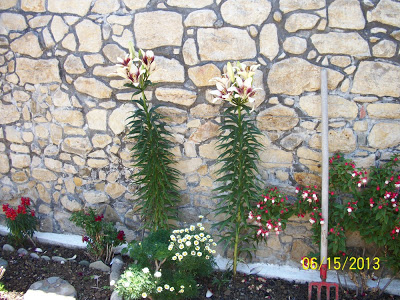 I have just written the ending of Penny Royal III, well, the bit I’ll put THE END after. I still have another section to write prior to that and a recent idea I had concerning one plot thread means I’ll be going through all three books altering and adding. So at what point do I say I have rough drafts of all three books? When I do that prior section – the other stuff can be about turning rough drafts into the final polished version.