After writing a blog yesterday and doing some further work on Zero Point, which has now passed my before-we-go-back-to-Britain target of 80,000 words, we headed down the mountain for our Internet session. It was spitting with rain up here but that got a little heavier on the way down. It’s quite odd being out on a grey and rainy day wearing only a T-shirt, jeans and plastic crocs. My British experience tells me I should be wearing thick socks, a jumper and a leather jacket, maybe a woolly hat and gloves too, but the temperature was about 25 degrees. 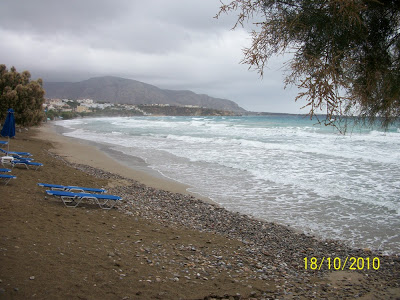 Having been kakos pethia over the weekend, we confined ourselves to orange juice in Revans (Internet bar). By email I got the initial Jon Sullivan cover for Prador Moon, then shortly after that the new improved version, which I will show here once I get a jpg of it. The air was already full of sea spray dripping off the tamarisk trees along what remained of the beach, the sea very rough (though some were still swimming in it), then the rain ramped up as this next picture shows. 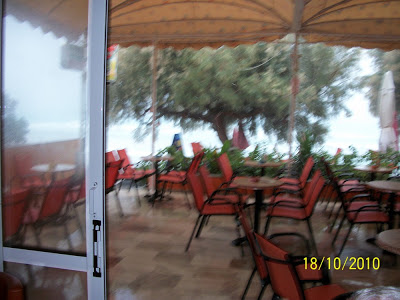 We hung around a little longer, drinking a very nice filter coffee, then headed back. I did some more work on Zero Point, then turned my attention to my tobacco leaves. Here, in order, are the pictures of my second attempt at making cigars, some of which will hopefully be dry enough to smoke during the next kazani next weekend.